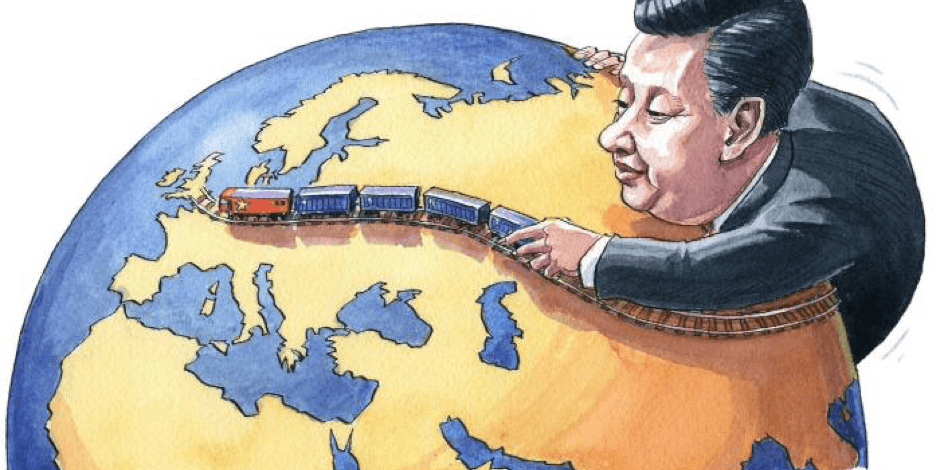 The idea that China is an imperialist power is a very useful ideological tool for the propagandists of the U.S. empire. It morally justifies Washington’s attempts to continue dominating the world through invasions, coups, and economic warfare by presenting Beijing as an equivalent or worse imperialist oppressor. It also turns many American anti-imperialists away from supporting China by convincing them that this rising anti-U.S. power is just another empire.

Rebukes to the “China is imperialist” meme are usually met with incredulous dismissals, because the people who hold this position usually have deep-seated ideological reasons for treating China as imperialist. One can point to how China doesn’t carry out regime change or use its military to illegally occupy sovereign countries like the U.S. does, but this can be countered by (rightly) arguing this alone doesn’t prove China isn’t imperialist. One can point to how China has a pattern of forgiving foreign debt in contrast to Washington’s strategic manufacturing of debt, but this can be countered by pointing out the (unsurprising) fact that China’s loans are initially given out in similar ways similar to Western loans. The impulse among Western chauvinists and “anti-authoritarian” leftists is to view a rising non-U.S. aligned power like China as an unambiguous villain, so the debate goes in circles.

To convincingly prove that China is not imperialist, I’ll need to move beyond the rhetorical quips about individual aspects of the issue and show how when it comes to the core definition of imperialism, China doesn’t fit the criteria.

What is the definition of imperialism?

Lenin defined imperialism as “the monopoly stage of capitalism,” clarifying that “Such a definition would include what is most important, for, on the one hand, finance capital is the bank capital of a few very big monopolist banks, merged with the capital of the monopolist associations of industrialists; and, on the other hand, the division of the world is the transition from a colonial policy which has extended without hindrance to territories unseized by any capitalist power, to a colonial policy of monopolist possession of the territory of the world, which has been completely divided up.”

As Lenin acknowledged, this briefest possible definition of imperialism is only adequate when the specifics around it have been also articulated. For an economic relationship to be imperialist, he concluded, there are five requirements: that monopolies play a decisive role in economic life, that bank capital and industrial capital have merged to form a financial oligarchy, that the export of capital as opposed to the export of commodities takes special importance, that international capitalist monopoly institutions share the world among themselves, and that the biggest capitalist powers decide the divisions of the world.

But the definition we’re looking for is even more complex than this. His caveat was that “imperialism can and must be defined differently if we bear in mind not only the basic, purely economic concepts — to which the above definition is limited — but also the historical place of this stage of capitalism in relation to capitalism in general, or the relation between imperialism and the two main trends in the working-class movement.” The trends he referred to are what he called “the Marxist and the opportunist” movements, which as we’ll both see have great relevance to the current debate over China.

I quote Lenin’s definition of imperialism because it included acknowledgments of the historical circumstances that must factor into whether a power can be judged as imperialist. As we’ll see, the view that modern China is imperialist stems both from an exaggerated perception of how much China fits the economic criteria for imperialism, and a failure to consider the historical context which defines China’s foreign policy and internal economic system.

RELATED CONTENT: China: The US is an Empire of Hackers that Spies on Everyone

Does China fit this definition?

At least within the leftist circles that view China as imperialist, the core argument is that China’s inclusion of large corporations within its economy makes it dominated by monopolies, and that this makes it fit the kinds of criteria for imperialism which Lenin mentioned. But in terms of the country’s overall economic structure, it’s hard to argue that these corporations make up a decisive role. Nearly 70% of the 119 Chinese firms featured on the Fortune Global 500 list are state-owned, and the twelve biggest Chinese companies are government-owned. The state maintains control over heavy industry, energy, finance, transport, communications, and foreign trade, which are the most important aspects of the economy. Private production is encouraged by the state only because it spurs technological development, employment, and modernization.

China also can’t be considered a financial oligarchy. The Chinese government’s propensity for imprisoning and in many cases executing wealthy industrialists reflects the fact that despite its capitalistic market reforms, the PRC is still a workers’ state. The Communist Party of China is extraordinarily popular among the people it governs, because as mandated by China’s democratic process, the CPC primarily serves the interests of the people. Its vast social safety net has all but eliminated Chinese poverty, and China has become the global leader in environmental protection due to its socialist state intervention.

These facts about China’s internal governmental structure are relevant towards proving why China is not imperialist, because they show that its role in the world isn’t driven by a desire to serve bourgeois interests. This is apparent because China’s internal prioritization of public economic control is reflected by its external prioritization of state socialist loans. The vast majority of China’s foreign loans are not capitalist investments, but rather government funds that have in many cases been used to free countries from the grip of imperialism. In addition to China’s having provided Laos with the equivalent of $32 million in interest in free credits in 2013, which has helped Laos overcome its debt slavery to the International Monetary Fund, China has forgiven nearly $10 billion in debt. Cuba accounts for over half of this forgiven debt, a development which has made the country better equipped to overcome Washington’s economic embargo.

China utilizes a variety of instruments to advance its interest in ways that western nations can only envy. Most of China’s investments are through state-owned companies, whose individual investments do not have to be profitable if they serve overall Chinese objectives. Thus the representative of China’s state-owned construction company in Ethiopia could reveal that he was instructed by Beijing to bid low on various tenders, without regard for profit. China’s long term objective in Ethiopia is in access to future natural resource investments, not in construction business profits.

Despite recent claims that China has been using its companies to engage in neo-colonialism throughout Africa, the situation Lyman assessed has continued to be the case throughout the last fifteen years. As I’ve mentioned in past writings, China’s investments do not meet the definition of neo-colonialism; Chinese enterprises help the job markets abroad rather than only employing Chinese workers, China hasn’t been engaging in “land grabs” in Africa, and China isn’t working to trap African nations in debt. In accordance with China’s not engaging in regime change, China has also never favored any government for its form or ideology.

Charges of imperialism and neo-colonialism have been used to delegitimize numerous other facets of Chinese foreign policy. Anti-China commentators have claimed China is seeking imperialist domination over the South China Sea even though China has only been protecting its own commercial lifeline from U.S. imperialism; some pro-Western figures have accused China of “neo-colonialism” in Hong Kong even though essentially all that China has done to Hong Kong in the last several generations is free it from British colonialism; similar claims have been made about China’s efforts to influence Tibet and Taiwan even though China hasn’t suppressed the religious freedom of Tibetans, and even though Chinese socialism would be the perfect replacement for Taiwan’s bourgeois “democracy.”

Whatever criticisms of China’s foreign policy that can be made, they don’t amount to proof that China is imperialist. The fact that China makes efforts to ensure that its companies are profitable abroad doesn’t equate to a colonialist project, and certainly not to an imperialist one. The country doesn’t fit Lenin’s five criteria for imperialism, and the one that it arguably does perpetuate-which is the prioritization of exporting capital over exporting commodities-isn’t used by China to subjugate the countries which it gives funds to and invests in.

One of the key distinctions between China and America’s foreign economic involvement is that there’s no evidence of China wanting to secure resources for profit. The other key difference, as demonstrated by the former, is that China doesn’t artificially raise prices through monopolies to attain super-profits. This all makes apparent a line between the world’s imperialist powers in the U.S./NATO alliance, and between China and its ally Russia-which are both independent countries that are merely trying to trade and invest.

If China isn’t imperialist, how should we view it from a Marxist perspective?

Not all communists and leftists will ever agree that modern China is worth supporting. In spite of all of the facts I’ve mentioned, it’s easy for an anarchist, social democrat, or traditional Maoist to make the argument that China is revisionist or “state capitalist.” Yet while not everyone can ideologically support China’s incorporation of private industry, at the very least we must get rid of the perception that China is imperialist. Because if this myth is dispelled, China’s true role in the world will be wholly recognized by the anti-imperialist movement.

Rather than being a moral equivalent to the United States, China has been furthering the Palestinian cause, militarily protecting socialist Venezuela from invasion, helping rebuild Syria amid nine years of Western imperialist assaullt, financially liberating countries from imperialism, and weakening Washington’s former primacy in the Indo-Pacific. China may not be directly fomenting socialist revolutions, but its efforts to drive the U.S. out from the world are helping make future revolutions more likely. As are China’s economic maneuverings.

As the columnist Saikat Bhattacharya has written, China’s Belt Road Initiative is an operation to shift economic leverage away from the West, and therefore away from colonialism itself:

BRI is best understood as the antithesis of colonialism. While colonialism was a Western response to its trade deficit with Asian kingdoms and also to the supremacy of Asian mode of production over Western pre-industrial revolution era production, BRI is the response of trade surplus China to the fact that US share of global GDP is becoming too small to generate demand for Chinese products…BRI is about sharing resources of rising China with the rest of the world. Before the rise of the West, China was the top global producer and that period is not associated with colonialism. So China reclaiming back its old position cannot be termed as colonialism rather BRI is the antithesis of colonialism.

Therefore from a Marxist perspective, China is the greatest current engine of change away from imperialism. After the U.S. empire has declined enough, China will emerge as a dominant world power that functions as a peacekeeper rather than as a conqueror. Its successful socialist model will set an example for developing nations, and its reshaping of the global economy will empower these nations to act independently from the declining old imperialist powers.

China may be a participant in the machine of global capitalism, but any truly nuanced view of it places it as an anti-imperialist presence. This is the Marxist analysis of China’s role in the world, as opposed to the opportunist one that treats China as an unambiguous menace. In 2020 more than ever, siding with China is the position that reflects knowledge of how material conditions shape the potential for socialist revolution.