There’s a video doing the rounds on Twitter, a solemn-voiced, serious-eyed man appealing directly to the camera: “Venezuela is facing disaster”, he intones. And then there’s stock footage of violence and protests and people carrying luggage. It’s all very upsetting. Watch it for yourself if you must: 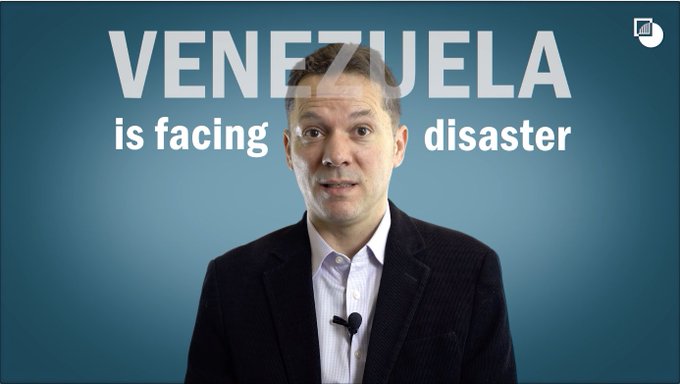 #Venezuela if facing disaster. Without a strong internal campaign for peaceful change, the threats of military intervention from abroad will multiply.@CrisisGroup‘s @itbriscoe explains why a united opposition is essential to solve the crisis

The man is Ivan Briscoe, “Program Director – Latin America and Caribbean” for something called The International Crisis Group.

According to their about page, The International Crisis Group is:

…an independent organisation working to prevent wars and shape policies that will build a more peaceful world.

Which sounds lovely. I mean, who doesn’t want a more peaceful world?

Of course, I suppose, technically “preventing conflict” could mean enforcing absolute consensus and not allowing dissent or individuality. I mean, I’m sure the CIA argued that the assassination of Salvador Allende “prevented conflict”, because otherwise they would have had to invade Chile.

But hey, they probably don’t mean that.

I mean, Ivan doesn’t actually condemn the assassination attempts on Maduro, or say that a military intervention would be both immoral and illegal. He doesn’t even mention the sanctions, illegally imposed, which are crippling the Venezuelan economy (this is “collective punishment”, and is banned by the UN Charter).

But nevermind all that, I’m sure Ivan isn’t trying to be deceitful. It’s not like this is a government funded organization, pushing an agenda…

We’ve been here before. A lot actually. It’s always the same. The President/CEO worked for the Obama Administrartion:

Oh look, a Soros. The Caterpie equivalent of NGO-backers…

…and when you have a Soros, the Open Society Foundation is never far behind.

Let’s see. Open Society, check. Carnegie, check. Rockefeller…oh, no Rockefeller? No, there it is.

Now let’s wrap it up with a quick look at their corporate donors:

And what’s this? Chevron, Statoil, BP, Noble Energy, ENI and Shell? Aren’t they all petroleum and natural gas based energy companies?

That’s strange, why would six major energy companies be on the board of an NGO promoting regime change in Venezuela?

Wait…doesn’t Venezuela have the largest oil reserves in the entire world? Why yes, yes it does.

And didn’t Chavez, and later Maduro, increase the royalties paid for Energy Companies who want access to Venezuelan oil? Why yes, yes they did.

So, to sum up, a “non-partisan” NGO partly funded by American billionaires, oil companies and Western governments wants a “peaceful” transition of power to avoid “further assassination attempts” or even a full on invasion.

How humanitarian of them.