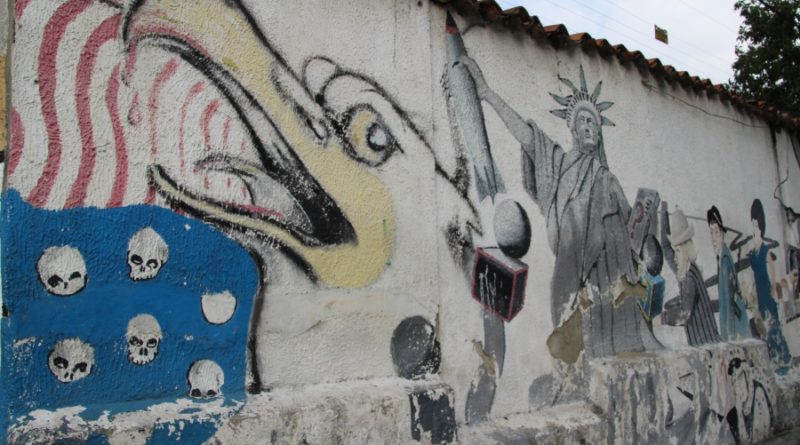 The Venezuelan crisis is back on the daily foreign policy menu of the Trump administration. It seems incredible that Washington gives time and resources to the Venezuelan scenario when it is overwhelmed by the other crisis, the world-wide crisis of the coronavirus, where in the United States tens of thousands are infected and hundreds die every week, with 6.6 million unemployed and a recession that is on its way to overcome by far the Great Depression of 1929.

Let’s look at the facts. At the beginning of the year, Secretary of State Pompeo and President Trump’s personal lawyer Giuliani threatened the governments of Havana and Caracas with intimidating pressure, having as their main objective the resignation of the Maduro government. Maduro acknowledged that such pressure had been exerted and strongly rejected [it]. Cuban President Díaz-Canel made it clear to a group of foreign correspondents who accompanied him on his inspection visit to Sancti-Spíritus province that he rejected this last-minute maneuver on the part of the U.S. government.

Shortly afterwards, a CARICOM conference was held in Kingston, Jamaica, with the attendance of very few members -less than half of its membership- of this group, to which American foreign policy usually attached very little importance, always sending junior officials. But the latter was attended by no less than Pompeo himself, seeking to gain support from those attending for his plans to maneuver against Venezuela and Cuba. He did not find any echo or official support from the governments present there.

Persisting in such designs, in the recently concluded month of March, two initiatives appear in US foreign policy towards the Venezuelan crisis that seem to contradict each other. They have unusual levels of inconsistencies in both and both supported by a surprising deployment of US naval air forces in the vicinity of Venezuela’s territorial waters, The latter is fuelled by the wishes and prognoses of many in Washington and Miami that this could be the prelude to the application of some variant that derives from the precedent of the invasion of Panama.

The two initiatives to which I refer are:

a. The well-known sanctioning of Maduro and other important leaders of the Venezuelan government by the American authorities, who have put prices in the millions on their heads, in the best style of Hollywood westerns. In a truly threatening tone, its similarity to the case of Panama (Noriega) in 1989 seemed to suggest a much more confrontational and aggressive course of action after more than a year of failures trying to bring about, through various tactics, the overthrow of Maduro’s government.

b. And suddenly, barely two weeks later, the Secretary of State, Pompeo, announces another formula, this one diametrically opposed to the first one because of its apparent political-diplomatic flavor. In this formula, Maduro and Guaidó are asked to resign from their posts and deposit their positions and functions in the hands of a council of state composed of five members elected by the National Assembly, which would govern for one year and prepare a general election accepted by all.

Remarkably interesting is the fact that the proposal does not exclude Maduro or Guaidó from appearing as future presidential candidates. This proposal by Pompeo makes no mention of Maduro’s being prosecuted for drug trafficking, as if it did not exist, nor does it establish any link between the former and the latter. In exchange, the US would proceed to “soften” or reduce the enormous burden of economic and legal sanctions imposed by Washington on the Caracas government. Both political figures -Maduro and Guaidó- have rejected such a settlement offer.

Then the unbelievable happens: at the beginning of April, the deployment of US air naval forces very close to Venezuela’s territorial waters is announced under the alleged argument of intercepting and counteracting the alleged drug trafficking originating from Caracas to the US. This deployment of military forces by the United States seems to operate in a direction contrary to that of a political-diplomatic arrangement such as the one formulated at the end of March.

It is perfectly legitimate to ask: is this a return to the Panama precedent or a calculated exercise of greater pressure leading Maduro and Guaidó to accept the transition proposal (Democratic Transition Framework, as it has been called) or, failing that, to influence by this means, once again, the Venezuelan military in favor of a Bonapartist/coupist way out that would evict Maduro and his government team and put an end to the Chavista movement?

Let’s look at the different angles in order to get closer to a more complete diagnosis:

a. The accusation of drug trafficking -made with special emphasis after Maduro’s re-election- means we must look into a couple of indispensable references.

b. First, a very rigorous study by National Geographic Magazine in the mid-1990s excluded Venezuela as a producer/exporter of cocaine and other drugs. Instead, it documented how the Orinoco River served as a “river road” for a percentage of Colombian drugs to Guyana and from there to Africa/Europe.

c. Second, the renowned drug trafficking specialist and UN Deputy Secretary-General in charge of this issue for a number of years, Pino Arlacchi, stated in an interview for an Italian publication at the end of March: “There is no illegal drug trafficking between Venezuela and the United States, except in the sick fantasy of Trump and his collaborators.”

And to substantiate this claim, it draws on two sources: the Report of the United Nations agency in charge of monitoring this issue (UNDOC) and the annual report of the Drug Enforcement Agency (DEA) of December 2019. According to the latter, 90% of the cocaine introduced into the United States comes from Colombia, 6% from Peru and the remaining 4% from unknown sources. If Venezuela were the source,” Arlacchi said, “it would not have gone unnoticed” in these reports.

I am not suggesting in any way that Venezuela is a country of immaculate saints, where levels of corruption are witnessed in not a few high-profile cases, but from here to international drug trafficking as presented by Trump and his team goes a very long way.

As for the scenario of military aggression by the United States against Venezuela in the current context, it seems unlikely. Broad sectors of the American academic world did not consider it possible in January 2019, and even less so now given the geopolitical and demographic scales and the volume of costs in the case of an attack on Venezuela compared to the episode in Panama mentioned above.

The latter was for Bush Sr., parodying the famous phrase of John Hay, Secretary of State of Theodore Roosevelt, in a famous letter to him, “A splendid little war. In the case of Venezuela, the regional and international costs and complications would be much more complex. The main US allies in the European Union (EU), as well as Canada, are opposed to such a resource and several of them are engaged in very different negotiation projects than Washington.

On the other hand, Trump’s allies in the region -Colombia and Brazil- that could play some level of support, are going through serious internal tensions that rule out their participation in any military operation in the current circumstances. And it should be added: Much less now with the apocalyptic coronavirus that absorbs all the time and resources of almost the entire world.

The plan now proposed by the Trump administration does not fit in any measure to the requirements and objectives of both Maduro and Guaidó. As happened not long ago with the Trump plan for Israel/Palestine, its rejection is outright. Washington ignores, once again, that the path of a negotiation to stabilize the Venezuelan crisis should not and cannot be conceived as a humiliating surrender. It must encourage a multilateral approach, in the company of other international actors more trustworthy to Maduro such as Norway and Spain, that provide more balanced proposals and balances acceptable to all parties to the conflict and not a simple call for surrender.

Here is an example of all those involved in this crisis, the path of Contadora-Esquípulas, which in the second half of the 1980s provided the basis for a satisfactory settlement after prolonged and patient negotiations with international auspices between all parties to the violent and bloody conflict in Central America.

The negotiating efforts initiated in the Dominican Republic and those promoted by the CARICOM countries Norway, by influential figures from Spain and other regional actors such as Mexico and Canada led – until now – to repeated failures given the intransigent position, and to torpedo, all those political-diplomatic efforts aimed at bringing about a settlement satisfactory to all parties.

Returning to the Contadora-Esquipulas path is the precedent that best suits the political-diplomatic handling of the Venezuelan crisis.

The last thing left for Trump is to hope that his proposal – now backed by the deployment of military forces – will find some support in the Venezuelan military and thereby precipitate a coup solution, with or without an assassination. It is not idle to recall that so far, the loyalty of the Armed Forces to the Maduro government has prevailed, and that all the coup d’état maneuvers emanating from Washington and supported by Guaidó and his followers have ended in resounding failure.