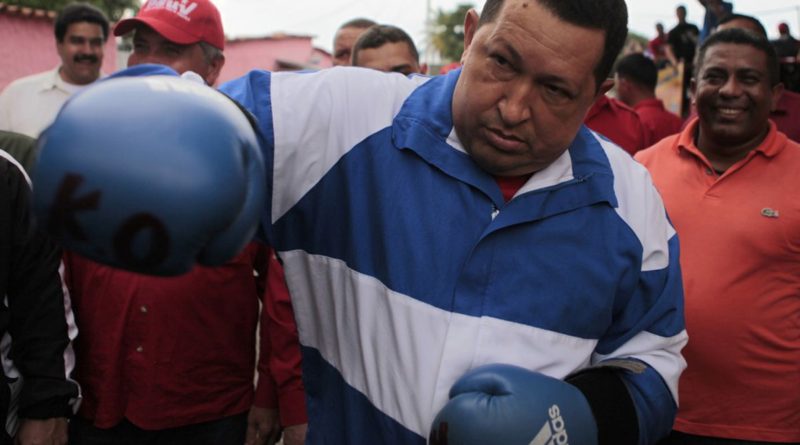 These are the most notable 11 rounds fought by Chavismo and Venezuela in conditions of high social tension in the last 20 years: the episodes in which Venezuelans had to suffer the rigors of the drastic alteration of our daily lives, physically and also through the investment of large doses of emotional energy.

Included is this terrible Round 11 that we are fighting right now.

First round: Before the seizure of power

Popular support for Chávez, before and during his presidential race, and later in his first years in office, unearthed monsters that we believed to be, or were supposedly, properly buried in our society: racism, contempt from a self-styled “thinking class” or “civil society” for those being poor, indigenous, African and peasant embodied in the president who rose to power.

A round of indefinitions, contradictions and babbling, like any germinal stage.

Second round: Landslides and reorganization

The commonly called “Vargas tragedy” (1999) meant a natural catastrophe in several ways. One of them, the obvious punctual disgrace of the coastal populations and some areas of Caracas, and then a phenomenon to which we have not paid enough rigor or attention: the deepening of hatred or mistrust from town to town that meant the transfer of thousands of victims from La Guaira, Caracas and other towns in Miranda State to other areas of Venezuela.

As usually happens with any forced transplant, the measures of transfer and relocation of entire communities generated a foreseeable cultural shock. Where harmony and empathy would have been desirable, rejection and the triumph of prejudice flourished. Still today one stumbles anywhere in Venezuela upon testimonies of this type: “This town was healthy and there was no crime, until they brought the victims here.” A very important and pending task for us, Venezuelans.

The first medium or long-range tremor occurred when business fascism managed to displace Hugo Chávez briefly from power (April 2002), in a coup d’état where we (Chavismo) had to activate as a street agitation factor. Many say in public that without the eruption of the people, the return of Chávez to Miraflores would not have been possible, although in private they say that this was a matter decided by the military. But the episode dislocated us as a society.

The smoke from the cannons had not dissipated when the business guild mafias returned to their business as usual and paralyzed a good part of the vital processes of the country, starting with the oil industry and retailing. When the wealthy and upscale ones expected us to collapse and surrender, we survived by giving up the industrial city and returning to old practices: firewood, conversation, solidarity, and barter.

Fourth round: Guarimbas and floodings

The first time the word “guarimba”, associated with the concept of sabotage and street insurrection, became widespread, was in 2005, a year that also registered a new meteorological episode of uncontrolled rains, more victims and a feeling of widespread destruction.

The guarimbas failed because the sifrinaje (wealthy Venezuelans) believed that barricading El Cafetal, Altamira and the middle-class neighborhoods would paralyze the country.

Year 2007, eruption of the generation of (Otpor style) white hands and butts in the air (Guaido style), spurred on and financed by business leaders and neo-Nazi parties. Although it continues to be called the “end of the concession” of RCTV, the truth is that this channel was shooting mercilessly at the Chavista project and Chavismo seized the weapon.

At the same time, or as a consequence, that year we suffered the first electoral defeat of Chavismo, when the Commander proposed a reform of the Constitution and a handful of power hungry people loaded it with ridiculous and inapplicable proposals. A year of street violence, of pure and simple fascism showing its claws from the universities, of meaningless deaths.

Sixth round: Third flood of the century and GMVV

For the third time the elements entered to play hard against the precarious city inherited from another time and another model, and thousands of people lost their homes again under the raging waters. This time the Commander responded with a decisive measure: the creation of shelters at the headquarters of state institutions so that the victims remained while their homes were built.

Thus, the Great Venezuela Housing Mission was born in 2011 and the configuration of the cities underwent a transformation that is still bubbling and is felt.

Seventh round: Chávez’s death and terrorism

Nicolás Maduro’s rise to the Presidency of the Republic occurred in the midst of another merciless attack, now with direct interference and less and less disguised by transnational factors (Colombia, United States) and the return to the process of destruction of property, closure of public roads and murder of people for their origin and (“Chavista”) appearance.

RELATED CONTENT: US Sanctions in a Time of Coronavirus are Morally Depraved as Well as Illegal Under International Law

Voluntad Popular, Primero Justicia and other far-right political parties financed the activation of politicized youths and criminals with no political vision of violence, creating severe shocks in various areas, including highways.

It was the year that the “Venezuelan Mandela”, Leopoldo López, was imprisoned, who had said that if he was brushed with a silk scarf the country would explode into a thousand pieces. In his name, several dozen boys were sent to the most sterile sacrifice, the alleged superhero was imprisoned and the country did not explode to save him.

Round eight: Economic warfare in depth

Nicolás comes to power and, perhaps based on the assumption that Chávez’s death would lead to the end of Chavismo, the hegemonic machinery sharpened its attack, destabilization and overthrow procedures. A miscalculation by the government led to the massive flight of foreign currency (remember CADIVI “raspa cupos”). Leak or massive expropriation of the physical currency and Venezuelan basic products (medicines, food, hygiene and cleaning products) to Colombia.

The year 2016 may be the year of deepening our hardships: shortages, hunger, destruction and disappearance (and reappearance in the streets of Cúcuta) of our bolivar (monetary cone). To close that macabre year, the platform that managed the banking processes was sabotaged in early December and no one had access to its money.

Back to the process called de-urbanization or ruralization: we again defeated consumerism and nostalgia for “those Christmases”. It is the year of deepening of the exodus and its propagandist use; the alleged “Venezuelan diaspora” began to fill the pockets of the ruling political classes in South America, since receiving Venezuelan immigrants is paid well, not to immigrants but to those who propagandize with their hardships.

It was a reissue of the seventh round, but on steroids (closure of roads, mass murder of Chavista citizens or in poverty, spread by MSM and social networks), and later, when in the form of “paralysis in comfortable easy payments”: closure of main routes, to see if the phenomenon destroyed the nerves of the community. Nothing: we are still standing.

It was useless to murder and send to death youths who previously were paid per day, they disguised them with a medieval paraphernalia that helped build a false epic of “liberators”, and later one of their bosses or sponsors fled with what was left of their “salaries” to the house of the Chilean ambassador.

Everything that provides energy and movement to Venezuelan citizens and to Venezuela as a country has been the object of continuous and brutal attack: electricity generation or access to food, domestic gas, fossil fuels, water, has been destroyed or hindered. And, once again, the return to old survival practices, to mass kidnapping in capitalist cities has mitigated our suffering or has resized the keys to life in dignity.

In the long preparation for the collapse (we still do not know exactly what will collapse) this current situation has crossed us, it is not Venezuelan, but has led to the most grotesque cruelty by transnational fascism. Humanity has turned to its own need for survival through the process of quarantine, social isolation, partial and temporary stop of some processes of the capitalist apparatus.

Human society is a sick body that needs to rest and stop its processes, and this is or can be painful, uncomfortable and traumatic.

In such a situation, the anti-Venezuelan attack has not stopped, on the contrary, is escalating. The United States and its puppets have decided to re-create here a media fantasy that worked in Panama, Libya and Iraq, among other scenarios: they threaten to overthrow us, because suddenly we are to blame for the fact that American citizens like drugs so much and feel irrepressible impulses to consume them.

Rejecting that stupidity with speeches and facts is easy. But the truth no longer convinces anyone; propaganda may force even fanatics to doubt, but the truth won’t. It is not by saying or demonstrating truths that the United States war apparatus against Venezuela will stop.

After the quarantine is over and the pandemic has dissipated, we will continue under attack. Until something or someone collapses, or even beyond collapse.

(This is an appendix to a later article entitled “When This Is Over.”)