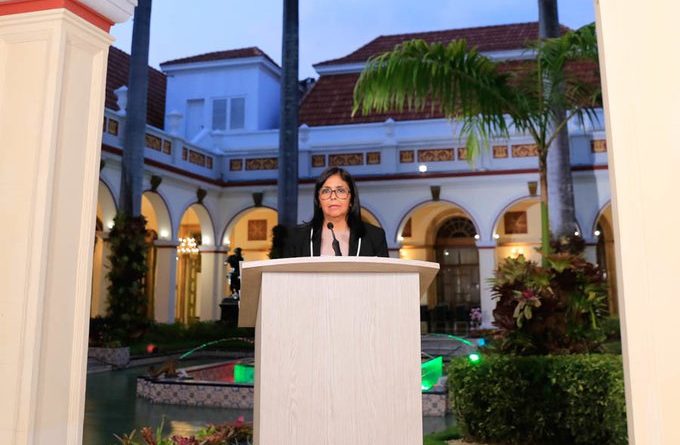 The information was released by Venezuelan Vice President, Delcy Rodríguez, from the Miraflores Palace in Caracas, at the end of the customary meeting of the Presidential Commission for the Control and Prevention of the Coronavirus.

Of the four new positive cases: 1 is a resident of Táchira state, 2 of Aragua state, 1 of the Capital District.

She added that the total of positive patients to date: 27 are receiving treatment in public hospitals, 27 of them in Comprehensive Diagnosis Centers (CDI) in Barrio Adentro, 12 in private clinics, 10 people are kept in home isolation and the government is making efforts to transfer them to health centers, while six are isolated in hotels and the death toll remains at 9 unfortunate losses.

Rodríguez specified that as of April 10, Venezuela has carried out 159,597 tests, which is equivalent to 5,320 tests per million inhabitants for the diagnosis of Covid-19 .

Referring to the Patria System health questionnaire, she mentioned that this Friday the number of responses rose to 18 million people, a total of 130,991 people who manifested any symptoms were visited house by house as part of the massive and personalized investigation that joins the quarantine to keep flattening the contagion curve in the country.

She pointed out that in the Special Plan for Venezuelans who return to the country after suffering xenophobia and ill-treatment in other nations, more than 5,000 people have been treated at points deployed in border areas.

Donation to Caribbean brothers and sisters
The Executive Vice President reported that as part of the solidarity that characterizes the Bolivarian Revolution, Venezuela donated rapid tests and PCR to Saint Vincent, the Grenadines, and Dominica, Antigua, Barbuda and Grenada, to contribute in the fight against this pandemic with the brothers from the Caribbean.

She also announced that this Saturday, April 11, the third air shipment with humanitarian aid from the People’s Republic of China will arrive in the country.