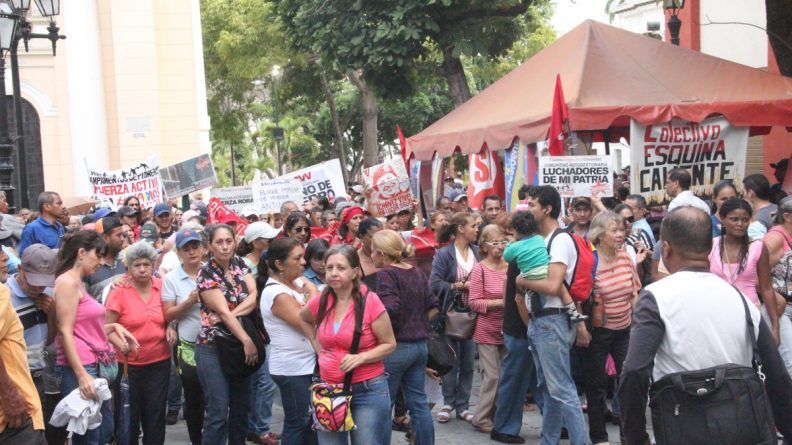 Popular movements want to build half of the houses planned by the national Housing Mission.

Venezuelan popular movements marched to the National Constituent Assembly on Tuesday to demand their voices be heard on the issue of housing.

Rigel Sergent, spokesman from the Tenants’ Movement, a part of the broader Pobladoras movement, explained that the mobilization is the result of months of organizing by the different platforms.

“We are proposing that the current economic crisis is all the more reason to trust the organized people,” Sergent told Venezuelanalysis. “That’s why we want to spur debate around a law for the self-managed production of habitat and housing,” he added.

RELATED CONTENT: Movement of Settlers Mobilized for the Approval of the Self-managed Production Law of Habitat and People’s Housing

Around 37 percent of the over 2.5 million homes built by Venezuela’s Great Housing Mission (GMVV) have been undertaken by popular movements. With the government setting the target of 5 million homes, which are assigned mainly to low income families at little to no cost, by 2025, popular housing movements are proposing they be granted responsibility for 50 percent of the total construction.

“We’re not just talking about access to resources, but that the conditions [to build those 50 percent of homes] be created,” Sergent explained. “This means having access to land plots under social property and access to means of production. In the same way that the state is pursuing alliances with the private sector, we believe we also have the capacity to produce, for example, bricks on a massive scale.”

The tenants’ spokesman reiterated that the goal was not just to meet with ANC members or be heard by a specific commission, but to have the right to speak in the plenary session. As such, activists underscore that they are not bringing forward a legislative proposal, but rather opening a debate which they hope will extend to the entire country. For their part, the “Venezuelan Housing Assemblies” (AVV) consist of groups of families who organize around the struggle for housing, usually on a specific land plot. Antonio Zambrano is a spokesman from AVV Constructores del Panal, in 23 de Enero, Caracas.

“We have the will, the people, the ability and experience to build houses, but we need a law to back us,” he told Venezuelanalysis, adding that it is important that the organized people be given this responsibility, since with the private sector “the resources are never enough, and there’s no accountability.”

Zambrano’s AVV is also part of El Panal commune, and he explained how the struggle for housing fits into the dynamics of communal power.

“Our vision [in El Panal] is one where we believe in ourselves,” he affirmed. “We already undertake a host of productive activities, we have built or rehabilitated four small housing complexes.Therefore we believe that through self-management, organizing and planning, we can address all the issues of the community.”

The march, which started in downtown Caracas, was not received by any member of the ANC upon arriving at the Legislative Palace. Security forces directed activists to the nearby Casa Amarilla to submit a formal request to speak. After a long wait and no answers at Casa Amarilla the march went to the ANC’s offices where they were finally received.

ANC Deputy and former Housing Minister Ricardo Molina received the letter and pledged to submit the request to the ANC’s leadership, while also assuring that the body takes the proposals of popular movements seriously. Nevertheless, the movements have vowed to continue marching every two weeks until their goal is achieved.

For his part, Sergent stressed that the idea of self-management should not be restricted to housing but rather be a transversal idea.

“The issue of housing is the gateway, but we see self-management as a general principle that extends to all areas, like we see with campesinos, communards or workers who recover factories. We are calling on organizations from all other spheres to join this struggle,” he concluded.