On Sunday, April 4, Venezuela marked the 385th day of the fight against the COVID-19 pandemic. The country registered 1,786 new cases in the last 24 hours, of which 1,779 were cases of community transmission and 7 were imported, in addition to 15 deaths. This was communicated by Venezuelan Executive Vice President Delcy Rodríguez during the televised COVID-19 briefing by President Nicolás Maduro. “This is the day with the highest number of cases reported in Venezuela,” said the president in his customary Sunday address. 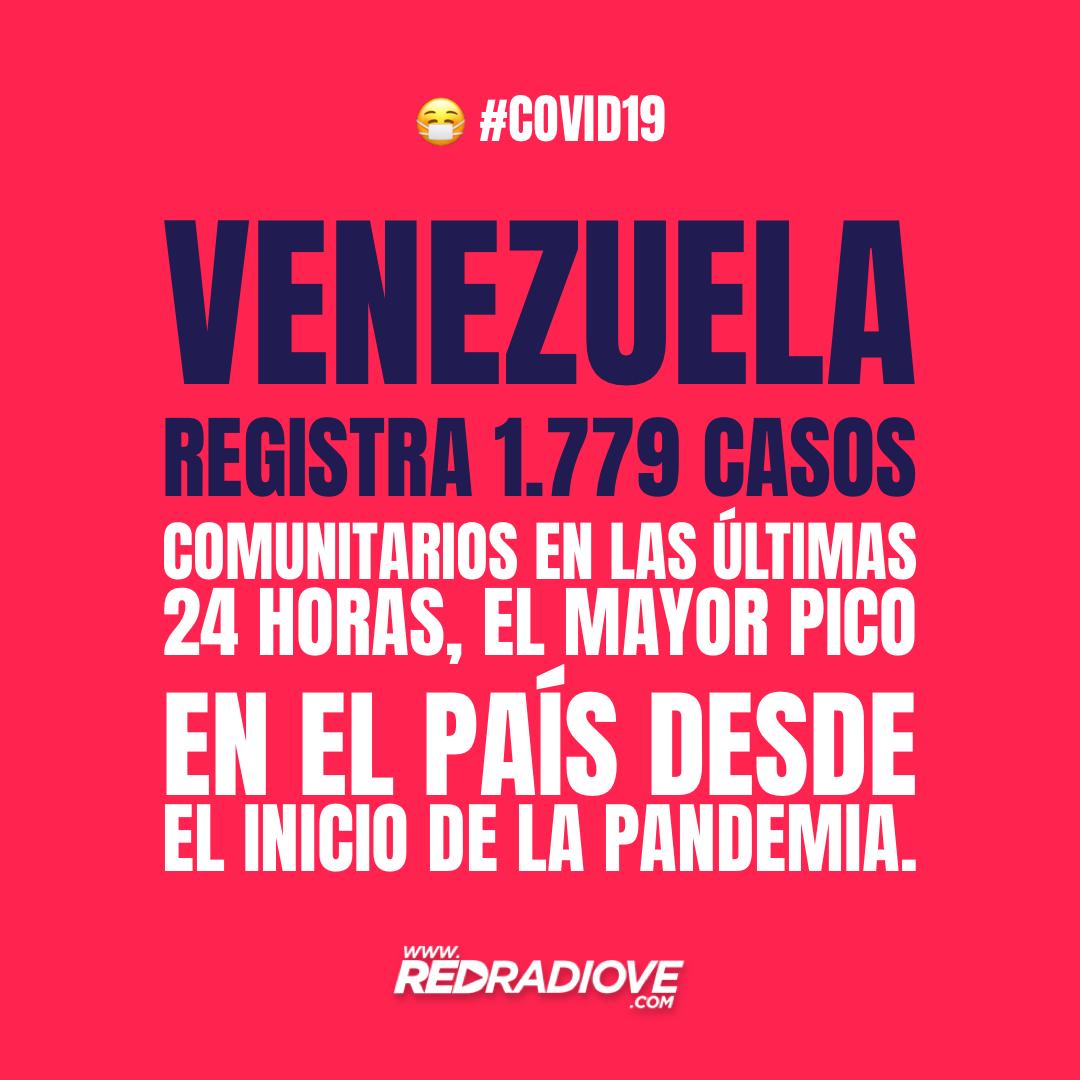 With this update, Venezuela accumulated a total of 166,123 infections and 1,662 deaths resulting from COVID-19 over the last 385 days. Out of the total number of cases, 13,172 are reported as active. In March, a total of 21,381 cases were registered, after 12,189 reported in February. “This shows a considerable rise in the number of infections in the country,” Rodríguez concluded.

The percentage of patients who recovered from the disease decreased from 92% to 91%.

The state of Miranda registered the highest incidence of the day, with 327 cases. Among the municipal regions of the statd, 98 cases were reported in Los Teques, 83 in Sucre, 30 in Guatire, 20 in Guarenas, 19 in Baruta, 13 in Higuerote, 13 in Carrizal, 12 in Yare, 10 in San Antonio de los Altos, 6 in El Hatillo, 5 in Chacao, 4 in Ocumare del Tuy, 3 in Río Chico, and 3 in Charallave. In addition, Andrés Bello, Santa Lucía and Mamporal municipalities each registered one case. “We must take care of ourselves even more. We the people of Venezuela already know how to take care of ourselves. Well, we must adopt extreme measures of containment,” added the executive vice president after detailing the cases in the centrally located state leading the list of daily infections.

Imported cases
On Sunday, 7 imported or international cases were registered—3 from Mexico, 2 from Colombia, 1 from Dominican Republic and 1 from Turkey.

Deaths
In the last 24 hours, 15 deaths were reported, with which the South American nation totals 1,493 deaths due to the novel coronavirus. Of the 15 deaths, 3 were reported in Caracas, 3 in Miranda, 3 in Anzoátegui, 3 in Nueva Esparta, 1 in La Guaira, 1 in Aragua and 1 in Sucre.

“With reinforced measures, we can now contain this second wave, a more virulent and dangerous wave due to the Brazilian variants,” said President Maduro in his weekly COVID-19 brief. “If for some reason a person suffering from the disease does not want direct medical attention, it is a mistake and the entire nation has to pay dearly for it,” the president stressed, after informing that several of the deceased stayed at home and arrived late at the health centers. In this regard, he urged everyone to go to the doctor on time and not to self-medicate “either out of laziness or overconfidence.”

Weekly report
In the last week, Venezuela has maintained an average of 11,461 active cases, with 1,353 new daily infections and 857 recovered per day, according to the weekly report presented by President Maduro. “Please note that we have not recovered the positive trend of balance between new and recovered cases,” he reflected.

Cases in Venezuela started to increase from the first week of March, coinciding with the entry of the Brazilian variant in the country. Cases per 100,000 inhabitants rose from 30 in the last week of March to 40 in the first of April. “This is the highest point we have had in the history of the pandemic in Venezuela,” said the president.

In addition, the report states that this week 9,468 new cases were registered. Miranda and Táchira showed a stable behavior or trend. On the other hand, the growth of statistics is particularly important in the states of Anzoátegui, Aragua, Delta Amacuro, Lara and Yaracuy, where the number of cases doubled compared to the previous week. La Guaira, Carabobo, Monagas, Nueva Esparta, Apure and Zulia grew by more than 10 points, the rest of the entities grew by less than 10; for example, Caracas, which has a growth of 2 points per 100,000 inhabitants.

Recommendations:
First among the recommendations made by the commission is to maintain radical quarantine throughout the country for the next 7 days to reduce the growth of new cases and consolidate the rates of declines in some states.

“Passed! We will maintain the radical quarantine these 7 days to come,” said Maduro. “When necessary, the 7 + 7  reopening scheme will come again. We need, without a doubt, to radicalize the quarantine to see results—to protect health and life of our people. In some countries they either did not do it or they waited too long. Then there is the case of Brazil, where the president goes out every day to tell people not to use masks, that there is no need for physical distancing and that they do not need to get vaccinated,” the president added.

“We assume our responsibility to do everything that needs to be done on time,” he continued. “I ask for maximum conscience, Venezuela.” He also recommended that everyone should comply strictly with the control and prevention measures at the national level. “We cannot give up, we have to maintain care, prevention and discipline,” he urged.

Finally, he instructed the relevant authorities to increase hospitalization capacities in public and private health centers, as well as in health hotels in those states that are registering an increase in cases; and to guarantee the availability of medicines, health personnel, oxygen and everything else necessary for treatment.