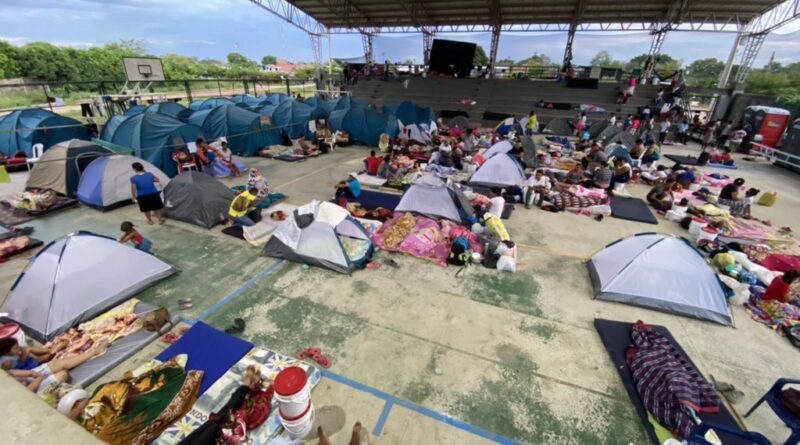 The Mayor of Páez municipality in Apure state (Venezuela), José María Romero, complained that a group of Venezuelans are being held in Arauquita, Colombia, and prevented from returning to La Victoria (Venezuela) in order to attempt to discredit reports about the tranquility and peace re-established in Venezuela.

“It is worrying to see how after almost 15 days, there is pressure from Colombia preventing people from returning,” said the mayor in a video shared by Venezuelan Defense Minister Vladimir Padrino López. “We have information that it was forbidden to leave the shelters until Tuesday.”

“Mayor José María Romero made it clear from where the events took place,” wrote the minister of defense on his Twitter account. “Colombia intends to continue playing the media circus, which even with all its efforts, has not been able to position its narrative in Colombia or in Venezuela, nor internationally.”

“We know that people have been quarantined, allegedly due to COVID-19,” said Romero. “It is contradictory to see how it is being used to keep the population on the [Colombian] side of the Department of Arauca.”

He denounced the media show guided by Iván Duque, after the Bolivarian National Armed Forces (FANB) expelled Colombian terrorists and narco-paramilitary gangs from La Victoria. The criminal groups aimed to install themselves in the area to expand drug trafficking networks across the border.

“Hopefully the consciousness of the people awakens and they realize the difference between living in Venezuela and living in Colombia,” added Romero. “And not to be used by the media show that is being created from Arauquita.”

Likewise, the mayor commented that “we here organize ourselves more every day for the return to normality. Starting tomorrow (Monday, April 5), the La Victoria-Guasdualito road will open from 7 a.m. to 6 p.m., so that people can get around. It is expected that tomorrow the Colombian authorities will allow the return of our fellow citizens.”

“We have talked with displaced residents of La Victoria and they have revealed to us the limitations that Colombian authorities put on people who want to return to their town (to Venezuela),” confirmed the official. “We have overcome the crisis and fear.”

Local media spoke initially about 4,500 displaced residents of La Victoria who fled to Arauquita, escaping from the violence created by Colombian narco-paramilitary gangs who control vast areas of Colombian territory.

Reports also indicate that more that 10% of those displaced Venezuelan residents are of Colombian nationality. Most importantly, it is also reported that many residents have been co-opted by Colombian paramilitaries to help them with their criminal operations, some by choice and others by threats to them or their relatives.