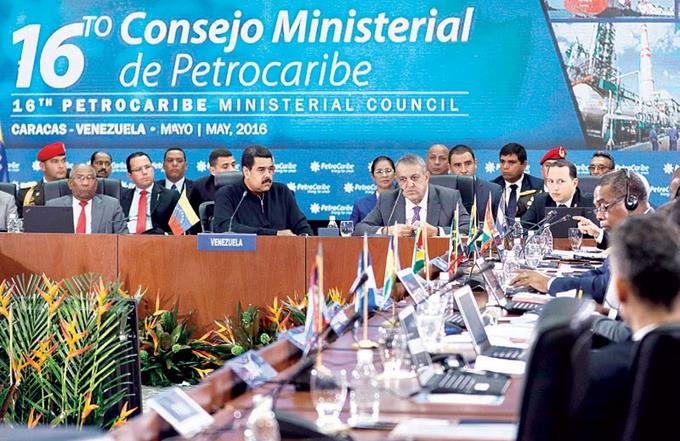 Caracas, February 15, 2022 (OrinocoTribune.com)—Yesterday, from Miraflores Palace in Caracas, the President of the Bolivarian Republic of Venezuela, Nicolás Maduro, asked to implement the “3 Rs Dot Net” strategy to adapt Venezuela’s Foreign Affairs Ministry to the level that Venezuela needs for seamless cooperation with Latin America and the Caribbean region.

During a farewell ceremony for the ambassador of Saint Vincent and the Grenadines, Andreas Wickham, President Maduro stressed the need to apply this strategy in order to deepen relations with the various countries of the Caribbean region and to strengthen Petrocaribe, both at a commercial level and to foster security for the region’s energy needs.

President Maduro expressed his belief that more can always be done to improve international relations, including “deepening cooperation in all commercial ranges to satisfy the needs of the people, resume Petrocaribe, and consolidate energy and fiscal stability in the region.”

"Sooner rather than later, we will recover Petrocaribe's investment capacity so that it can fulfill its historic role as a factor of social justice and stability in Latin America and the Caribbean", said president Maduro yesterday. pic.twitter.com/ng4z307BIq

The Venezuelan president added that “sooner rather than later, we (Venezuela) will recover the capacity of Petrocaribe,” noting that due to the ramifications of energy access on human rights and social justice, the reinvigoration of the program will aid the entire Caribbean region. In total, 18 countries make up the Petrocaribe energy alliance. Petrocaribe was one of the first fronts targeted by Washington when it initiated its attack against the Bolivarian Revolution.

Currently, most Caribbean countries are struggling with the rise in oil prices. Venezuela’s stalwart resistance to the US and European blockade has permitted a significant recovery in its crude oil and fuel (gasoline) capacity, much needed at this moment in the region. Despite some of the Caribbean countries playing a subservient role in Washington’s aggression towards Venezuela, the noble aspirations and strong ties of the Venezuelan people with the Caribbean will facilitate a resumption of Petrocaribe.

President Maduro added that there is “good news, Petrocaribe is going to be resumed as part of the effort of the workers of the Venezuelan oil industry, of a Bolivarian country, which is aware of its historical vocation for solidarity and sacrifice, for the liberation of the peoples of the continent.”

The head of state stressed that Petrocaribe contributed stability to the entire Caribbean, and is “needed now, when oil prices exceed $96 a barrel, and are heading for $100 a barrel, and the price of gasoline at the international level is skyrocketing—at 200 and more dollars a barrel.”