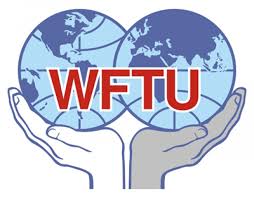 The World Federation of Trade Unions (WFTU), representing 95 million workers of the five continents as well as the world class-oriented labor movement, strongly rejects the attempted coup d’état against the legitimate government of the Bolivarian Republic of Venezuela.

This interference, orchestrated by the US government, NATO and the EU and executed by the representatives of the transnationals and monopolies in the country, constitutes a flagrant violation of the most elementary rules of international law and of the Venezuela’s sovereignty. For the WFTU, it is an inalienable right of each people to decide for themselves, without outside interventions, on their present and future.

At the same time, the WFTU reaffirms, as it has already done on several occasions, its solidarity with the Venezuelan people, with the working class and our affiliated organizations in the country in front of this imperialist threat. In addition, we call on the Venezuelan people to reject the maneuvers of the imperialists and their lackeys in the region, to condemn the plans of the murderers of the peoples. We will continue to support the Venezuelan working class, for the deepening of the Bolivarian process, until the abolition of man by man exploitation, towards a new world, without wars and imperialist barbarism. This is the only way forward to repel the plans of the imperialists.