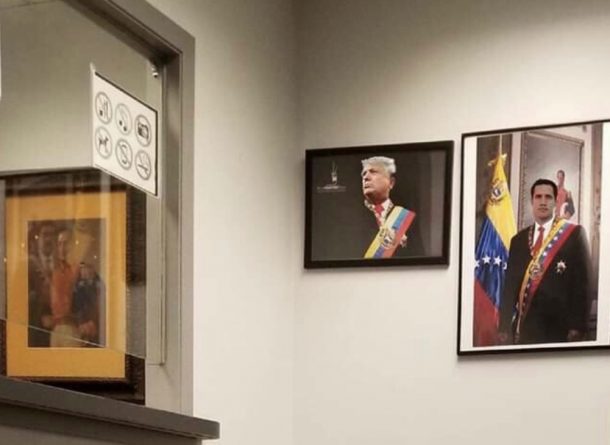 Last Wednesday, January 23, after Deputy Juan Guaido from the far right Voluntad Popular party self proclaimed himself as Interim President, the legal President of Venezuela, Nicolas Maduro announced the complete cut of diplomatic relations between Venezuela and the US. Three days later all Venezuelan diplomats were already back in Caracas and met with President Maduro in the Miraflores Palace.

On the same day US diplomats left Venezuela. At the moment there currently remains a very reduced number of diplomats allowed under Geneva Convention -by US request to Maduro’s government- evaluating the opening of an Office of Interest in Caracas, they said.

In the Venezuelan Consulate in Houston on that same day a Deputy Cónsul named Yajaira Flores declared herself in support of Guaido and almost simultaneously the Military Attaché in Washington DC, Colonel Jose Luis Silva did exactly the same after living in the US with that position for more than 20 years due to humanitarian reasons, acording to Venezuelan authorities because he suffers from brain cancer.

Most recently the ambassador of Venezuela in Irak, Jonathan Velasco , has also declared his support to Guaido. “This represents a fraction smaller that 0,01% of Venezuelan foreign service but it’s being used by the US to promote the idea of and advance of Guaido’s support that can only be believed outside of Venezuela because inside the South American nation everyone knows who runs the country,” said an international expert consulted by Orinoco Tribune.

In recent days there have been unconfirmed reports from Venezuelan citizens in the US that are outraged by illegal moves made by former consular local staff in the Venezuelan Consulate in Chicago. These unconfirmed reports indicate that the former staff have been providing consular services with posts on local social media pages. Today it was confirmed that these reports have been correct by a post that the opposition politician, David Smolansky, was accompanying the local staff —of the already closed consulate— in Chicago, Angie Ostos and Nathaly Ibarra. He posted a picture with the two former local staff members supporting deputy Guaido.

Recently Venezuelan authorities have announced that any individual acting in conjunction with promoters of the Coup D’Etat and breaking Venezuelan law will be prosecuted following the rule of law. The ministry of Foreign Affairs in Caracas have not taken a stance yet on this situation that might be happening in other cities and countries. “Precautionary measures have to be taken to secure the premises of Venezuelan foreign offices in the US due to the high chance of violation of diplomatic and consular Offices due the nature that most of them are rented,” said to OT a diplomatic source.

The feature image is a meme posted by Venezuelan expats in Chicago out of the Venezuelan Consulate’s reception in that city.