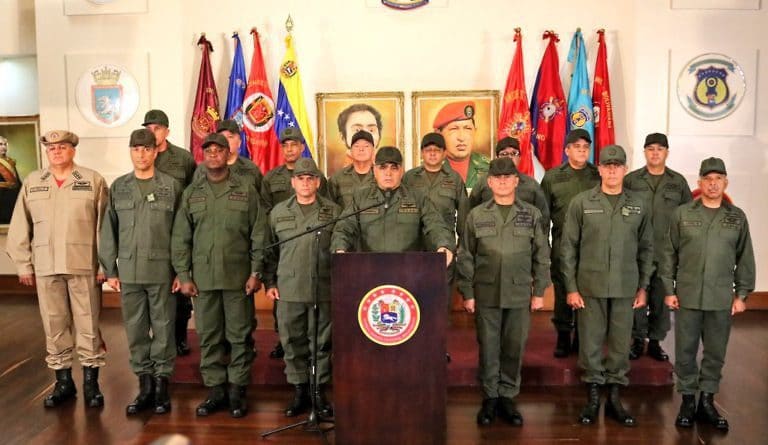 The Venezuelan Defense Minister, Vladimir Padrino López, in a statement issued in company of the country’s military high command, jointly rejected the speech delivered the previous day by US President Donald Trump in the State of Florida , who pretended to give them orders to ignore the President Nicolás Maduro as Commander-in-Chief of the Bolivarian National Armed Forces, and to bow to the offers of supposed “amnesty” promised by the deputy Juan Guaidó, who proclaimed himself as alleged interim president of the country.

Padrino López bluntly rejected the messages sent by Trump to the Venezuelan military. “When a president from another country comes to give orders to the Armed Forces, he is underestimating and disrespecting,” he said. He also said that no one will force the Venezuelan Army to break the law and the Constitution.

Lopez said that, in order for someone to give orders to the Bolivarian National Armed Forces (FANB), he must have been born in Venezuela, have made political life in the national territory, have run for elections and won them, with the support of the people through of the vote.

“Mr. Donald Trump, to boast of giving orders to the Bolivarian National Armed Forces, you have to comply with this road map and as you do not comply, it is preferable that you tell the world once and for all that the campaign against Venezuela is one. of psychological manipulation, to obtain political power, “said Padrino López, referring to the alleged “humanitarian aid” that the United States (US) government intends to deliver to the country.

In view of this, he indicated that Donald Trump tries with his words to confront the people with the Armed Forces, placing them at the center of the debate to break their unity, as well as attacking them with sanctions and manipulations.

“If you want to punish us, do it! If they want to blackmail us, blackmail us! But they will not break us. We are with our country! We are called, men and women of the people of Venezuela and the FANB, to fulfill our historical task and we are going to defend our country, we are going to resist and I am sure, because good must prevail over evil,” the Defense minister said.

Similarly, he stressed that in the FANB there are soldiers with a civilized conscience, who will not allow an unpatriotic government to be imposed in the country.

“We insist: the people are calm, there are functioning institutions, the people are there on the street working and forging their own happiness. There is a government that is in charge of its constitutional functions and there is a Bolivarian National Armed Force conscious of its military and citizen duties, “said Padrino López.

After his words, Minister Padrino López read the following statement:

(There is an) attempted coup d’etat against the legitimately constituted Venezuelan government, which has been in the making for a long time and has taken on more force at the beginning of this year; it has placed the Bolivarian National Armed Forces (FANB) at the center of the debate, which clearly is not convenient, since the political differences within Venezuela must be resolved through the mechanisms established in the national Constitution, and in no case by way of force.

In this line of thinking, yesterday we observed an act of extreme arrogance and terrible folly on the part of the President of the United States of America, Donald Trump, when referring to our country. The tone and content of his statements allow us to see at first glance the very dangerous attitude of those who unfortunately direct the destinies of a military power, which in its excessive imperial desire, has been orchestrating an interventionist plan against the nation.

In this sense, it is imperative to reiterate before the world that we are in the presence of an escalation that has resorted to the hybrid warfare method, to suffocate the economy by imposing an economic and financial blockade, with which it seeks to generate ungovernability, chaos and anarchy. We know well that its true purpose is none other than to take possession of our national riches.

It is unusual that in flagrant violation of the elementary rules of international law, he intended to give orders to the Venezuelan military, promoting or encouraging a confrontation with their nationals under the pretext of “humanitarian aid”. Imagine for a moment,how it would appear if some ruler asked American troops to ignore their commander in chief and disobey his authority.

It is not conceivable that the Armed Forces of any country, including the United States of America, be threatened in the rude and insolent way that President Donald Trump has done, also trying to blackmail us with a supposed amnesty while trying to intimidate us with coercion.

Definitely, President Donald Trump completely ignores the eminently Bolivarian, anti-imperialist and professional character of our institution, which for several decades has been constituted as guarantor of democracy, always strictly attached to the Constitution and the laws of the Republic, based on in which the election, through the popular vote, of the citizen Nicolás Maduro Moros, as president for the period 2019 – 2025, was materialized, to whom, the generals and admirals, superior officers, subordinate officers, professional troops and enlisted troops, all soldiers of the country, we reiterate unrestricted obedience, subordination and loyalty.

The Bolivarian National Armed Forces will never accept orders from any government or foreign power, nor from any authority that does not come from the sovereign decision of the people, and will remain deployed and alert along the borders, as ordered by our Commander in Chief, to avoid any violation of the integrity of our territory.

The threats, the blackmail and the coercion, will not fragment our unity and moral strength, because we are not mercenaries that are sold to the highest bidder; we are the worthy heirs of Bolívar, Zamora and Chávez, and true to their principles, we will defend the most sacred interests of the Venezuelan people; their freedom, their sovereignty and independence.

In context
Last Monday, from the International University of Florida, in Miami, US President Donald Trump reiterated his threats against the components of the FANB and asserted, once again, that “all options are on the table” as regards the situation who lives Venezuela.

He affirmed: “The eyes of the world are upon you. They can choose between accepting President Guaidó’s generous offer of amnesty and living their life in peace with their families and compatriots, or they can choose the second way: to continue supporting Maduro. If you choose this path you will not find a refuge, there will be no easy way out. They will lose everything,” threatened Trump.

The US president said that “the Army has a vital role” in the “transition of democracy” in Venezuela. He added: “Today I ask every member of the Maduro regime to end this nightmare for the people of poverty, hunger and death.”