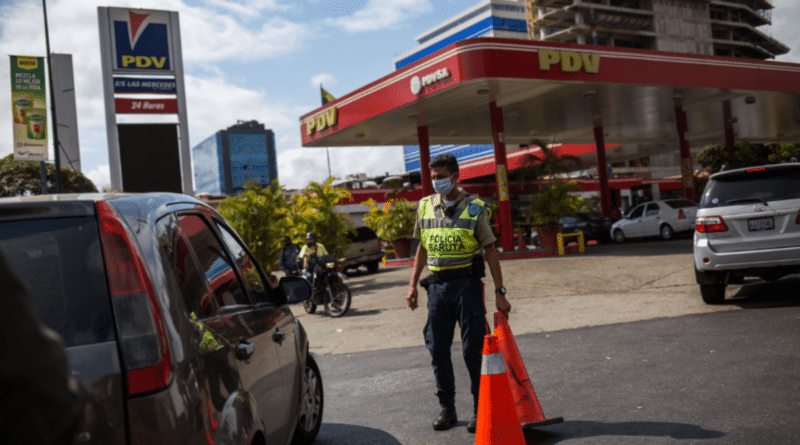 We, the undersigned popular and revolutionary organisations publicly declare:

1. We JOYFULLY CELEBRATE the successful actions of the Islamic Republic of Iran, which, with dignity and courage, broke the infamous and unjust encirclement which the imperialist government of the United States has sought to set up against the people of Venezuela. The flag of Iran proudly flies on the mast of the Fortune tanker, showing the whole world that with the people’s unity, solidarity and combativeness in struggle it is possible to confront and defeat the plans, strategies and operations of the imperialist bourgeoisie that today aspires to take humanity back to the outdated period of colonialism.

2. We INVITE the world’s popular organisations and revolutionary forces, in the context of solidarity and revolutionary internationalism, to strengthen and radicalise their struggles against the governments of their respective nations, demanding the suspension or abandonment of any support for the sieges and blockades implemented by US imperialism against sovereign peoples and nations, such as Palestine, Iran, Syria, North Korea, Cuba, Nicaragua and Venezuela. Likewise, through popular struggle it is necessary to replace submissive governments with ones which emulate the courageous, dignified and anti-imperialist example of the supportive government of the Islamic Republic of Iran that, by breaking the maritime blockade against Venezuela, has shown the world that it is a state that does not kneel in front of the empire.

3. We make a FRATERNAL CALL to our compatriots, who, in the midst of the drama we live through as a society due to the various problems that burden us, have chosen in their despair and naivety to support the cynicism of certain political sectors which take advantage of our legitimate demands and seek social backing to implement conspiratorial US imperialist plans. Here, we do not speak to those of the fascist, pro-imperialist and traitorous Right, because we know that they are the nation’s sworn enemies. Rather, we address our neighbours, the workers, peasants, students, and professionals, in short, the responsible, hardworking and honest women and men of our country. These sectors have been the victims of a psychological war which looks to hamper their understanding that the struggles for better conditions and rights, as an oppressed and exploited popular class, are not fought under the flags, plans and policies of imperialism, the bourgeoisie and the fascist Right, but under the revolutionary flags of socialism. No one has said that class struggle has ended in Venezuela; no one has said that we do not fight for our interests and rights today. On the contrary, what is proposed is to struggle and struggle harder, but under a correct political-strategic leadership. An insufficient understanding of the delicate moment we are going through may lead us to become pieces of the puzzle designed and executed by imperialism, which looks to overthrow the constitutional government of Nicolas Maduro and eliminate the institutional and legal order set out in the constitution of the Bolivarian Republic of Venezuela,.

4. We CALL on all the people’s and Venezuela’s revolutionary organisations to redouble their fight against imperialist aggressions against the nation, while promoting popular struggle in order to implement a set of measures that guarantee the defence, rectification and deepening of the Bolivarian Revolution. In this context, the struggle against corruption, arbitrariness, crime and neoliberal policies and plans, in short, everything that comprises the denial or dismantling of the original aspirations or the conquests achieved during the Bolivarian Revolution, must be resolutely confronted. These practices and policies are factors that hinder the advance of the revolution and weaken the identification and support of the popular sectors with the process of building socialism.

5. The GREATEST GUARANTEE of stability and the deepening of the Bolivarian Revolution lies in the development and strengthening of revolutionary and socialist popular power, which builds and acquires political-social prominence insofar as it is exercised. As such, the logic of its construction rests in its exercise, and put simply, popular power is built and developed in practice.

6. On the occasion of the arrival to Venezuela of the Iranian tankers loaded with fuel, it is necessary to guarantee a dynamic and conclusive EXERCISE OF POPULAR POWER to fight and counter all the corrupt and mafia-esque practices that have been unleashed around fuel distribution. For this, it is necessary to promote a struggle which safeguards the establishment of a popular system of control over the distribution of the fuel.

7. In the context of the struggle for the establishment of a popular system of control over the distribution of fuel, it is apt to request that Nicolas Maduro, as president and head of state, consider the following proposals:

a. Dictate the necessary measures in order to ensure that the various bodies and units of popular power may intervene and participate in a protagonist fashion in the decision-making of the fuel distribution process. For this, it is necessary that the government publicly and officially informs the nation regarding the amount of gasoline available; the distribution criteria based on activities and territorial spaces; the number of litres allocated to each service station which is working; the names of the people designated in each state, municipality and service stations to oversee the distribution; the rules governing the public conduct at the stations and maintain accountability in the management of distribution at each level.

b. Activate all electronic mass communications systems to constantly inform of the day-to-day development of the distribution. In this sense, a website could be designed and enabled exclusively for this purpose.

c. Demand that the public prosecutor’s office and the Supreme Court of Justice adopt all the necessary measures to ensure the prosecution and punishment of any person who engages in criminal acts regarding the distribution or use of the fuel.

d. Officially inform the people of Venezuela about the operational situation of the country’s refineries, the plans for their reactivation, as well as the likely time frames. In this sense, it is necessary to call on the Venezuelan working class so that, with its knowledge and experience, it can help with the repair of refineries in order to bring them back online in the shortest time possible, not only to meet national fuel demand, but also to put an end to the financial haemorrhage resulting from gasoline imports.

e. Learn from our historical experiences: the participation of the people was fundamental in the victorious return of our Commander Chávez to the government once overthrown on 11 April 2002. Likewise, during the oil lockout, the participation of the people occupying the fuel deposits, kick-starting refinery production, moving ships, retaking control of PDVSA and the dignity with which it faced the fuel queues and difficulties were all key components in defeating the fascist Right. It is time for our people to achieve victory once again. Only the people can save the people through mobilising, organising, creating consciousness and through struggle.

Caracas, Venezuela, the birthplace of the Liberator Simon Bolivar, May 24, 2020.

Featured image: Most fuel stations in Venezuela are currently under the custody of the police or Armed Forces due to gasoline shortages. (Panorama)