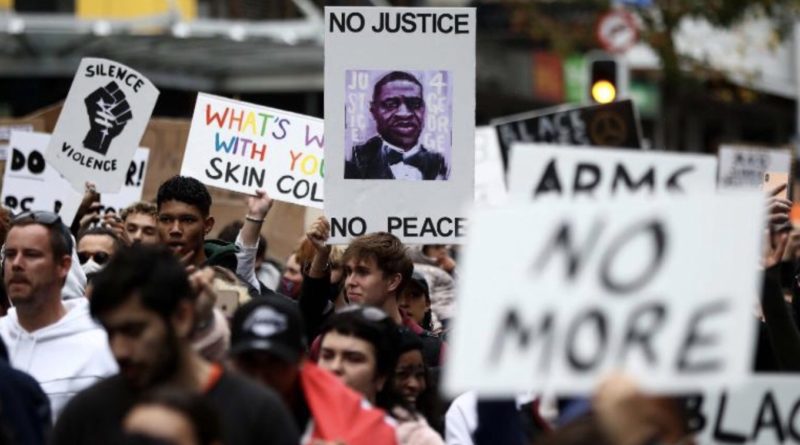 Liberals are trying to use reformism to deflect the energy of the George Floyd protests away from what should be the protests’ ultimate goal: the decolonization of the continent that’s been falsely named “America.” They claim that the violence against colonized peoples which the settler-colonial system has ingrained into law enforcement will be solved by “defunding the police,” whatever this is supposed to mean. They claim that the United States can move past racism, as if this settler-colonial regime and the capitalist system that it enforces aren’t tied in with racism.

Therefore decolonization won’t be a peaceful process, as liberals will no doubt claim it to be as it continues getting brought up. It will be an act of warfare against the illegitimate state of the settlers. Such was the case during the decolonization movements within Africa, whose inevitably violent natures were reflected on by Frantz Fanon in The Wretched of the Earth:

The starving peasant, outside the class system, is the first among the exploited to discover that only violence pays. For him there is no compromise, no possible coming to terms; colonization and decolonization are simply a question of relative strength. The exploited man sees that his liberation implies the use of all means, and that of force first and foremost. When in 1956, after the capitulation of Monsieur Guy Mollet to the settlers in Algeria, the Front de Libération Nationale, in a famous leaflet, stated that colonialism only loosens its hold when the knife is at its throat, no Algerian really found these terms too violent. The leaflet only expressed what every Algerian felt at heart: colonialism is not a thinking machine, nor a body endowed with reasoning faculties. It is violence in its natural state, and it will only yield when confronted with greater violence.

The questions to ask, then, aren’t “how to get America to defund its police?” or “how to vote out America’s current leadership?” They’re “how to overcome the violence of the settler state?” and “how will the continent be decolonized after the settler state is overthrown?”

As for how to overcome the state’s violence, the recently created Seattle autonomous zone has taught us a lesson in how this can be done. The zone has been established by armed activists, introducing the element of force that’s essential for countering the violence of the state. The reason why it will in all likelihood be retaken by the state is that its defenders lack the resources to permanently hold onto land. Future attempts at creating sustainable autonomous zones will be more likely to succeed if we utilize this moment to build up our movement’s defense forces; getting the members of anti-racist organizations armed and trained is how to help with this task.

The answer to the question of how decolonization will happen runs through the goal of defeating individualism and social chauvinism, which largely pervade the current left. It’s not enough for an organization to be anti-racist, it also has to put forth a political line that’s capable of defeating the capitalist and colonial regime. Anarchist groups, which have gained a presence in the recent protest movement, don’t address this need.

This is because anarchism, as opposed to communism, doesn’t acknowledge all of the steps that will need to be taken in order to dismantle capitalism. As Lenin explained in The State and Revolution, after the capitalist state is overthrown the revolutionaries will need to create a state for themselves. Otherwise the means for building and defending a socialist society won’t be available. The same realities apply to the task of replacing the settler-colonial state with a series of states which are controlled by the indigenous First Nations; government will be necessary to keep these liberated nations defended from reactionary and imperialist violence.

This disadvantage of anarchism in helping the anti-colonial cause, which is that anarchism doesn’t seek to build a state, epitomizes a larger flaw in anarchism: that it’s based in individualism. Individualism, as Fanon explained, is an obstacle in the movement towards decolonization. He wrote that in the political development of someone who’s seriously struggling towards national liberation, “Individualism is the first to disappear,” and that:

The native intellectual had learnt from his masters that the individual ought to express himself fully. The colonialist bourgeoisie had hammered into the native’s mind the idea of a society of individuals where each person shuts himself up in his own subjectivity, and whose only wealth is individual thought. Now the native who has the opportunity to return to the people during the struggle for freedom will discover the falseness of this theory. The very forms of organization of the struggle will suggest to him a different vocabulary. Brother, sister, friend — these are words outlawed by the colonialist bourgeoisie, because for them my brother is my purse, my friend is part of my scheme for getting on.

Despite communism’s many advantages over anarchism in how it can be used to help the anti-colonial cause, it’s important for communists-specifically white communists-to recognize that after decolonization happens, socialism won’t be established throughout the First Nations in a monolithic or uniform sense. No central authority will get to dictate the economic systems of these First Nations, it will be up to them to decide where they’ll develop next.

Having clarified this nuance about how socialism will relate to the continent’s decolonization, I shoud also mention the important role that socialism will no doubt have play in the liberation of the First Nations from colonial interests. The countries of Africa and Latin America may have officially long broken free from the imperialist countries, but imperialism and colonialism still dominate the vast majority of these countries. Specifically, imperialism and neo-colonialism; American and European corporations continue to exploit these countries in a neo-colonial fashion, while Washington still dictates who gets to lead most of these countries. In this way, they haven’t truly broken free from the grip of the colonizer. But socialism can correct this situation.

When socialists have taken power in these decolonized African and Latin American countries, neo-colonialism has been blocked within them. Zimbabwe’s communist president Robert Mugabe stopped the IMF and other neo-colonial forces from taking control of his country’s economy. Libya’s socialist leader Muammar Gaddafi greatly raised his country’s living standards before NATO ousted him in a regime change war for defying the imperialists. Bolivia’s socialist president Evo Morales did the same for his country before he was ousted in a U.S. coup. The socialist governments of Venezuela, Nicaragua, and Cuba continue to protect their peoples from the forces of imperialism.

If the First Nations get their land back, multinational corporations and the remnants of the imperialist regime change network will try to gain a different form of control over them. So socialism will prove to be a useful tool for making the anti-colonial process complete, as it’s proven to be in other places. It’s because of this highly beneficial relationship which socialism has with anti-colonialism that Fanon himself was a communist, and wrote about socialist nations in ways which implied an allyship with them in their shared struggle against imperialism; this quote from The Wretched of the Earth is one example: “The liberation of Africa and the growth of consciousness among mankind have made it possible for the Latin American peoples to break with the old merry-go-round of dictatorships where each succeeding regime exactly resembled the preceding one. Castro took over power in Cuba, and gave it to the people. This heresy is felt to be a national scourge by the Yankees.”

Given all these lessons from history, and from assessing the present material conditions, the tasks of someone who wants to help achieve decolonization in the continent now called “America” are clear: work towards the transferring of land to the indigenous peoples, support the cause of socialism (specifically Marxism-Leninism), and counter the arguments of those who seek to distort these lessons.