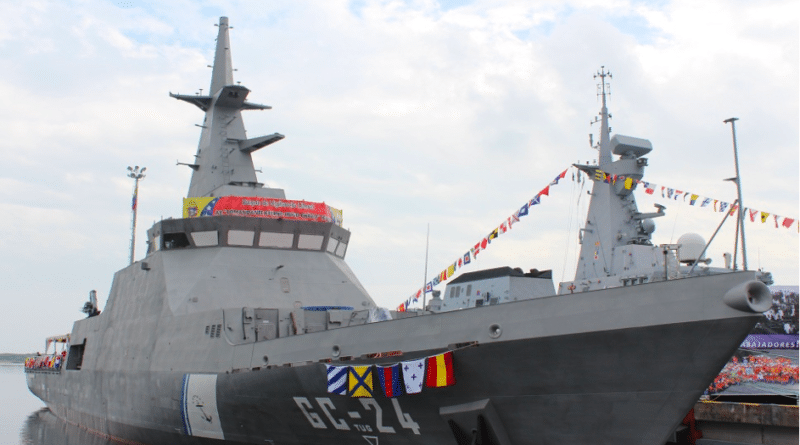 The Bolivarian Navy vessel Hugo Chávez, specialized in coastal surveillance, has been sent to patrol the Atlantic coast of Venezuela, as a ”response to the imperialist provocation of US military exercises in Guyana.” This was communicated by Venezuelan Defense Minister General-in-Chief Vladimir Padrino López, on June 24, during his closing speech at the civic-military parade commemorating the Carabobo Bicentennial.

Padrino López stated that ”our Navy, our Military, and our Bolivarian Militia are there on site,” and emphasized that the Bolivarian National Armed Force (FANB) is resolved to continue along the patriotic path traced by Simón Bolívar.

Padrino López added that the Military has been deployed to the border state of Apure to ”help the people combat the floods of the Arauca River.” He also alerted that Colombian criminal gangs continue in their ”intention to enter into our territory to commit misdeeds.”

Carabobo is today
Minister Padrino López called the commemorative military parade ”magnificent” and said that it was ”organized with a lot of love, dedication and commitment.” He also called on the FANB to look on to the horizon and continue in battle mode, even when ”we have reached 2021 victorious.”

Padrino López reflected that ”we are called to draw our sabers in defense of social guarantees, of peace, of the protection of our people and to watch over our democracy… which we won for ourselves as a sovereign people in 1999.” General López also encouraged those present that, in regard to the momentous historical date of the Carabobo Bicentennial for Venezuela and the region, ”we won but we cannot take victory for granted, we still have to travel a long way.”

According to Padrino López, the June 24 parade demonstrated ”our deep love for our Homeland” because it showcased the repairs done by local Venezuelan labor force of the powerful defense systems that were exhibited during the parade. ”What I am saying is not rhetoric, it is our will to win, to get ahead, when faced with the blockade, our response has been to work hard,” concluded the General-in-Chief.

It was worth getting to this point, but the fight continues
Padrino López remarked that he felt proud to be ”honoring the men and women who shed their blood in the fields; to the stoic, resistant, victorious people who walk the streets of Venezuela raising the flags of dignity, harassed as we are.” The General-in-Chief recalled that it was Chávez who invited everyone to look on this date from a long time ago. ”It was worth it, to arrive here and to continue Bolívar’s unionist dream,” he added.

Finally, Padrino López reminded everyone present that the Battle of Carabobo ”allowed us, as an organized united army, and under the leadership of Simón Bolívar, to direct all our forces and efforts to the liberation of South America.”