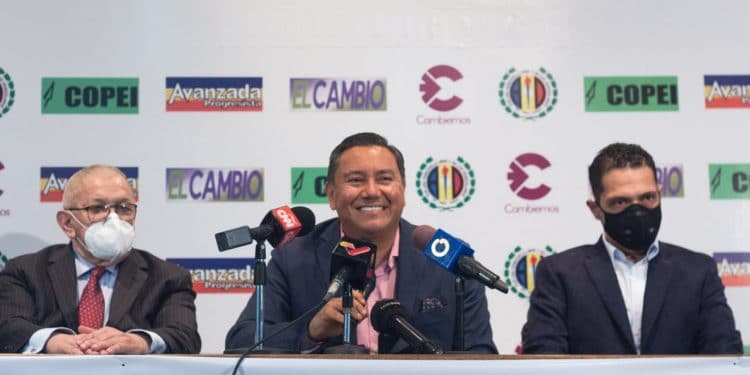 This Tuesday part of the Venezuelan right, made up of Democratic Action (AD), Copei, Avanzada Progresista (AP), Cambiemos and El Cambio parties, presented their unified campaign command called “Democratic Alliance.”
At a press conference that was attended by the representatives of these political parties, Javier Bertucci highlighted the importance of this alliance in the face of the upcoming electoral process, for which he invited other sectors of the right to join this unitary effort that he described as “Perfect.”
“Unity is not easy, but it is essential,” he said while ensuring that this alliance will be maintained for the upcoming electoral processes of governors and mayors scheduled for 2021.

RELATED CONTENT: Venezuelan Communist Party (PCV): Our Difference with the Government is Not due to a Quota in the National Assembly (Interview)
He explained that this alliance consists of the appointment of candidates in all electoral districts and voting lists for each of the parties, which will maintain the presence of their logo on the electoral ballot.

On behalf of this alliance Bertucci congratulated the stance assumed by Henrique Capriles, whom he called to join this opposition formula.
“We applaud the stand recently assumed by Capriles to participate and what we say is that the most sensible thing is that we do it together,” he said and recalled that it has been this sector of the right that has bet on the electoral scene “for a long time.”

He stressed that “we still have time to expand this unity,” so he extended the invitation to all sectors that want to join this partisan pact in the face of the parliamentary elections scheduled for December 6th.

Bertucci referred to the “route” proposed by Juan Guaidó and argued that the recent position taken by the European Union (EU) regarding the electoral process shows that this “interim presidency” plan failed.
“The route proposed by a sector of the opposition has been an absolute failure and the EU does not want to continue trapped in a dead-end option such as the one proposed,” he stated and dismissed the accusations of being “government collaborators” for wanting to participate.
“They call us collaborators, but those who collaborate with the government are those who do not go to elections and open the opportunity for them to control the National Assembly,” he said.
He regretted that there are sectors of the right playing for abstention and others that bet on the division.
For his part, the general secretary of Copei, Juan Carlos Alvarado, took the opportunity to reject the inclusion of the name of this political party among the signatories of Juan Guaidó’s abstentionist plan and stressed that the green party will participate in the electoral process.