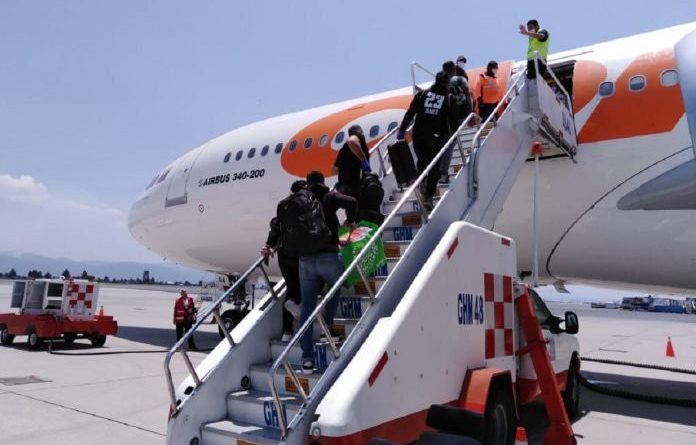 The inability of Juan Guaidó to manage the return of Venezuelans stranded in various countries, after the suspension of flights and the start of other measures to contain the advance of Covid-19, demonstrates the operational inability of his fictitious government to respond within and outside the country.

Since the first cases of coronavirus were detected in Venezuela and the government of Nicolás Maduro began to take radical measures to prevent its spread, the fictitious president in charge mounted a virtual operation whose function has been to project that he exercises control over the situation.

Protected by a campaign supported by fakes news, without material and human resources, Guaidó has become a delayed-effect spokesperson for the legitimate Executive by repeating the lines dictated by President Maduro through social networks.

Since he proclaimed himself president in January 2019, it has been repeated to the point that his “management” has been recognized by more than 50 countries. And despite the fact that his narrative has a more international than local projection, specifically its impact is limited to virtual reality.

In the agenda of “common” interests established since last year between the government of Donald Trump and Juan Guaidó, the least favored was Venezuela. The level of blockade and dispossession of resources of the country reached unprecedented levels since the interim presidency was “installed”. This is due, in the first place, to the fact that until now the United States has not had the support of an alleged Executive power that approved its actions.

Recently, from his virtual podium, Guaido issued a statement in which he points out the inability to use Venezuelan capital blocked in accounts to protect fellow nationals abroad, a fact that contradicts the supposed executive power that he had last year.

One of the inconsistencies in the document is that the amount of resources retained is not mentioned, nor is there a breakdown of the amount of assets or the causes of their blocking.

Venezuela has resources abroad that come from subsidiaries, joint ventures, financing, gold reserves at the Bank of England, among others, which are estimated at around 12 billion dollars, and not all are subject to the same sanctions.

Given the excuse that these resources are not available because they are “immersed in criminal investigations”, the opposition economist Francisco Rodríguez exposes the ambiguities and contradictions of said document.

One of these arguments is based on showing that the Guaidó “leadership” has managed resources from the companies transferred to its administration. According to the economist, through Citgo, a PDVSA subsidiary kidnapped by the Donald Trump government, “significant mobilizations of funds have been made to pay obligations.” This raises the question of whether the use of capital is conditioned and if the decisions on how to use it are autonomous.

What is raised in this case is transparency in the “availability of funds and the reasons why they have not been mobilized” to deal with a possible emergency.

On the other hand, the Guaidó statement indicates that the state accounts were “looted” by the Maduro government, and highlights the effort of his management that has channeled $20 million to address the pandemic, a pyrrhic amount if you compare it to the amount blocked by Washington.

RELATED CONTENT: 524 Venezuelans Stranded in the US Already Registered for Conviasa Humanitarian Flight

On the other hand, it is not explained how it is that through financial organizations such as the Inter-American Development Bank (IDB), which recognizes Guaidó as president, no available resources are channeled for the current pandemic, in addition to the 408 million dollars in credit corresponding to Venezuela.

Other capital that could be managed is related to the gold “retained” at the Bank of England. This reserve is valued at more than 1.5 billion dollars and was blocked as part of the financial siege against the state led by Maduro, which they do not recognize as president. The reason for blocking these funds is not due to corruption investigations either.

It is assumed that with the recognition of the executive tenure of Guaidó by the United States, the necessary legal elements would be completed for him to take control of Venezuela’s assets abroad.

However, decisions about the administration of Venezuelan resources seem to be more subject to Maduro’s stay in power rather than Guaidó’s recognition as president.

Finally, the “diplomatic” relationship that initially seemed between equals passed into subordination. The decision-maker is Washington and this was demonstrated by the final disposition, until now, of Venezuela’s assets outside the territory.

Venezuelans stranded in the US arriving home in a Conviasa flight from Mexico because the White House monsters did not lift sanctions even under these extreme circumstances..what a savages are there in Washington! https://t.co/zvp25yl6Mq

Given the current situation generated by the new coronavirus, since mid-March hundreds of Venezuelans were reported requesting the activation of humanitarian flights for their repatriation.

After the inability to manage the return of more than 800 Venezuelans who are in the United States, Guaido also recognized that he also had no power to negotiate a solution for the compatriots in diplomatic and political terms with the US federal government.

In this situation, the government of President Nicolás Maduro asked the United States for a direct flight permit, which was denied. Since May 2019, the Trump administration has prohibited direct flights from that country to Venezuela.

After exhausting different negotiation routes, two weeks later the Venezuelan government triangulated with Mexico so that a first group of 134 compatriots returned to the country, stopping in the city of Toluca. The new arrivals were treated and quarantined as a security measure. But also US citizens stranded in Venezuela were taken for free to Mexico by Maduro’s “dictatorship”.

The nullity of the “interim presidency” to deal with the pandemic is proportional to the international support that Guaidó claims to have. Support that, in addition to propaganda, has no effects in a framework of cooperation between nations.

Beyond arguing the lack of resources, he also did not show the political will to protect the stranded Venezuelans through negotiations from the office he “holds”.

Of the messianic promises since his appearance, only the emboldened attitude of the self-proclaimed remains, that has been caricatured with his performance in the face of the current pandemic. This image has been accentuated with the concrete actions of the Maduro government, measures that, against all odds, have contained the advance of Covid-19 in Venezuela.

Featured image:Venezuelans stranded in the United States had to travel to Mexico in order to be assisted by the Venezuelan state. Photo: Conviasa