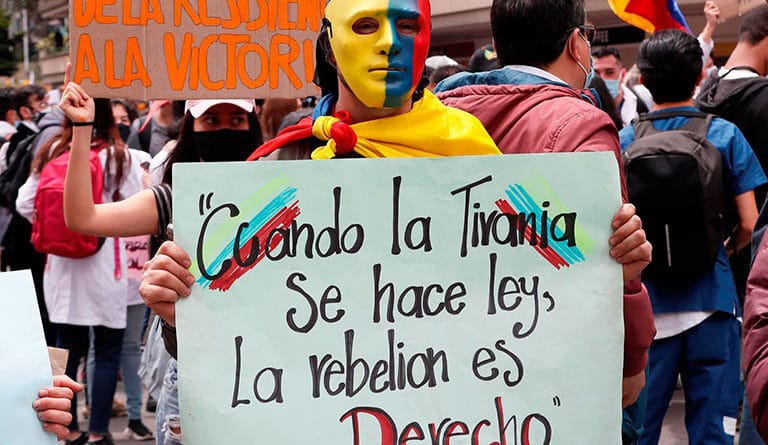 Venezuela’s Executive Vice President, Delcy Rodríguez, spoke about the current crisis in Colombia, where for more than eight days security forces have violently repressed demonstrators who took to the streets to protest against the government of President Iván Duque.

“Colombia is a failed imperial project that has condemned its people to the worst crisis ever seen: the world’s leading drug producer, excluded from the country’s political life, and unable to express themselves freely. Venezuela will always be an example for the sons and daughters of Bolívar!” wrote Rodríguez on her Twitter account.

RELATED CONTENT: Colombian Campesino Leader: This is an Authoritarian Regime

Colombia’s strikes and demonstrations represent an uprising against new measures presented by President Duque to Parliament including tax, health, labor and pension reforms. Social movements have also demanded protection for social leaders and peace signatories from the Duque government.

The brutal police repression of demonstrations, that has resulted in tens of fatalities and dozens of injuries, has been condemned worldwide.

So far, the Attorney General of Colombia, Francisco Barbosa, assured that his office will charge policemen for the killings of three civilians during the demonstrations, reported news agency EFE. “Three of these homicides will be attributed to members of the National Police in the framework of these demonstrations,” he said in a joint statement with the ombudsman, Carlos Camargo. Meanwhile, the Ombudsperson’s Office pointed out that 89 people have been reported as missing since the demonstrations began, but the prosecutor Barbosa assured that 38 of them “have already been located.”

Featured image: Peaceful demonstrators march through the streets during a new day of protests in the “national strike” called by unions and social organizations. Photo: EFE.