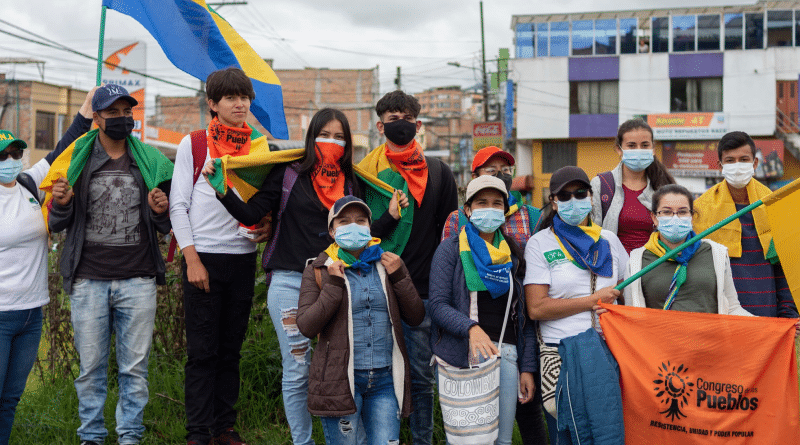 We interviewed Ernesto Alexander Roa, President of the Coordinador Nacional Agrario de Colombia (National Agrarian Coordinator of Colombia – CNA), an indigenous and Afro-campesino organization that works for the defense and recovery of Colombia’s rural areas, dignified life and popular sovereignty. Ernesto spoke to us by phone from Arauca on Monday, May 3, 2021, on the sixth day of national mobilizations which were ignited by the Colombian government’s proposed neoliberal tax reform bill.

KN: Bring us up to speed on the situation there in Colombia. How are things looking today?
ER: First of all, we, as a campesino association, the National Agrarian Coordinating Committee, have been involved in the mobilizations from the very beginning and from there we have helped to maintain the mobilizations which have taken place over the course of the last several days.

There have already been some partial achievements. I say partial achievements because they are simply moves by the establishment to try to demobilize the protests. I am referring to what is already happening with the withdrawal of the tax reform as a bill, but also the resignation of the Minister of Finance and his Vice Minister. But that’s also to say that everything happening now is the rise of the struggle in Colombia, despite the difficulties and restrictions of the third peak of the pandemic that we are also facing in the country.

Now, the human rights situation itself is unfortunately a reality that we have known for a long time. The attitude of this government cannot surprise us because this regime is an authoritarian and fascist regime. Unfortunately, this has been a permanent feature in history and just to cite the example of what happened in 1928, with the massacre on the banana plantations where the people were only asking for better wage conditions. So what is happening today in Colombia is ratifying what has been the oligarchic, murderous, mafia-like character that the bourgeoisie and the Creole oligarchy have had in their history.

KN: How is the situation developing in different parts of the country?
ER: [As far as the current mobilizations] unfortunately, as I have already mentioned, there has been repression, militarization, arrests, but also the murder and massacre that have occurred. The cities most affected have been Cali, Popayán, Pasto, Neiva, Bucaramanga, Medellin, Bogota. But there have been movilizations on the highways and the roads of Cauca, in La Delfina, on the roads of Buenaventura, on the roads connecting Pasto with Ipiales on the Pasto-Valle highway and on the different roads in Cauca where there are different indigenous Afro-campesino communities and other expressions.

What the demonstrations had called for has already been done, the tax reform that was being legislated was removed. Now our slogan is that this bad government must come down and we’re demanding the resignation of the President and his cabinet. That is what is now moving us to continue the mobilization, because if it’s not Alberto Carrasquilla (Minister of Finance who resigned today) it will be another Minister.

We also understand that there is a declaration of war again with the statements of the Duque government where he is practically giving a free pass for the military to kill.

They have also temporarily relieved the civil authorities of their duties in the case of Cali, so that the military will be in charge of controlling the city. That’s without ruling out that with the radicalization and strengthening of the national strike and mobilizations, a state of internal commotion (a category of State of Exception) may be decreed. We have been analyzing all this and we are aware of all these types of situations that have arisen and of the level of repression that may continue to occur.

KN: What are the demands of the wider mobilizations and of the rural campesino movement specifically going forward?
ER: We call for international solidarity, we call on multilateral organizations to make a call to the government to cease the genocide against the political opposition and any expression of resistance. We also want the national government to come face the country. It’s not a negotiation, it’s about the defense of the dignity of the people, of the defense of life and of the territories, of the national territories and of sovereignty.

This bad government needs to go, so we are now going to strengthen the strikes in the different territories. We, the National Agrarian Coordinator, had a national meeting today in which we reaffirmed our commitment and we will be going out with greater force in different territories in Cauca, Nariño, Valle, Huila, Catatumbo, Sur de Bolivar, Arauca, Casanare and Boyacá. We are going to continue increasing the level of mobilization in our different territories as well as other organizational expressions. The truck drivers and cab drivers in Cúcuta joined us, and so on, we will continue to express more voices.

And as campesinos we have demanded the integral and democratic agrarian reform. We continue to raise the historical demand of campesinos, which is the immediate surrender of land for the production of food due to the deficit we have here. But we are also demanding that they stop the attempt to renew aerial fumigation [of coca crops]. Instead of countering crops, the only thing it’s done is poison the environment and the roads and territories.

We have also demanded that they stop the genocide that has been committed against any social expression and in our case, to stop the assassinations of campesino leaders that have been taking place as well as the criminalization and imprisonment of our leaders. That is a very summarized version of what is happening today. The mobilizations continue, I believe that starting in the coming days, this mobilization will be much more potentialized and there is a new possibility and a change in the correlation of forces for a new alternative of power could be opening up in Colombia.