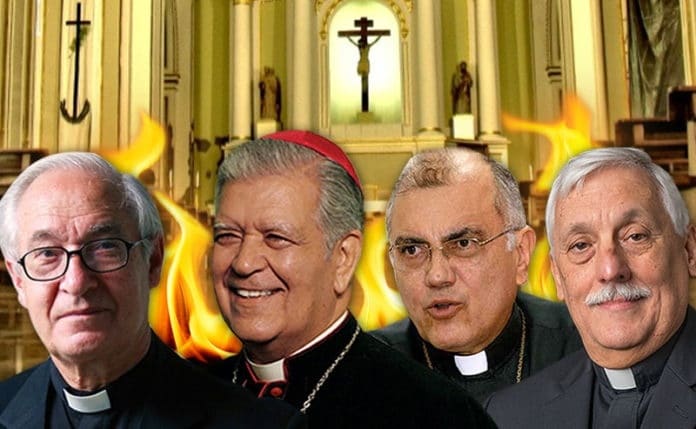 Find out about some of the Catholic Church’s most reactionary leaders in Venezuela.

Easter week is a very significant time for Venezuelan traditions, both for the Catholic and non-religious population. [In normal times,] some dedicate the holidays to reflection, prayer, and faith, while others spend it resting, having fun or taking trips.

In any case, the majority expect the representatives of the Church to offer words and actions in favour of peace, respect, dialogue and conciliation at this time.

However, this is not what certain right-wing religious leaders promote. Here we expose four members of the Catholic hierarchy who have participated in the destabilisation of the country in recent years. Made a cardinal by Pope Francis, the former archbishop was previously the president of the Venezuelan Episcopal Conference (CEV) which participated very actively in the April 2002 coup d’état.

He has confessed his involvement in that period in various audio-visual testimonies, in which he appears celebrating the breakdown of the constitutional order and failing to recognise the will of the people.

Several images also show him sitting next to the generals and admirals who kidnapped President Hugo Chavez and who set up the conditions for the triumph of a de facto government.

Documents unveiled by WikiLeaks have also exposed that this religious leader requested that the then US ambassador to Venezuela “speed up US intervention in Venezuela to do away with Hugo Chávez as soon as possible” on January 6, 2005.

Having previously served as archbishop of Merida City since 1991, Porras has never abandoned his hate campaign against the Bolivarian governments. Despite the majority of the people voting for these governments, he insists on ignoring these results and even incites violent and unconstitutional acts. This Jesuit priest and former rector of the Caracas’ Andres Bello Catholic University also played an important role in the events of April 2002. Days before the coup, he was among the main figures at the celebrated pact in the La Esmeralda mansion alongside [coup leaders] Pedro Carmona and Carlos Ortega [where much of the coup plotting was carried out].

He currently holds a senior position on the board of the world Jesuit organisation, which is striking when one considers that the purpose of this order is “the salvation and perfection of others.” This is precisely the opposite of what this priest helped bring about on Llaguno Bridge in 2002 [when right-wing snipers from Caracas’ Metropolitan Police shot at the Venezuelan people].

At a forum on December 12, 2016, the former rector also proposed to restore “democracy” [to Venezuela] with a military coup. The exact words were: “Without military support we cannot be rid of this dictatorship.”

He drew an analogy with the historical facts of 1958 [when Venezuela overthrew the Perez Jimenez dictatorship], advocating for a “government of national unity” led by someone who acts as [leader of post-dictatorship transition government] Wolfgang Larrazábal. So far, however, he has lacked indispensable popular support for this initiative. Some researchers have pointed to the connections which this priest, who was born with a silver spoon in his mouth, has with the world of transnational economy and the Venezuelan oligarchy, as well as with ministers of [former Venezuelan President] Carlos Andrés Pérez who were advisers for the World Bank and the International Monetary Fund.

The son of one of the most renowned bankers in the country, Sosa was named Provincial Leader of the Society of Jesus by Pope Francis, leading the congregation of the Catholic Church founded in 1534 by St. Ignatius of Loyola. This appointment strengthened his political power.

Some followers have let themselves be blinded by his eloquent speeches in favour of democracy and the disadvantaged, flavoured with some with left-wing rhetoric. This, however, is far from the truth.

His tenacious defence of what he calls Venezuela’s “political prisoners” has been one of his principal banners. He ignores the crimes committed by these people, as well as the fact that they are subject to the mandate of the country’s legal system. One would expect quite the opposite from a follower of Christ: support for the victims and actions of justice against the perpetrators. Cardinal Savino is responsible for the Archdiocese of Caracas. On New Year and World Peace Day in 2017, he directed all priests to read a political sermon in their masses which inspired rebellion “against the Chavista dictatorship”.

He also advocates the freedom of “political prisoners,” many of which are responsible for murder, chaos and destruction, acts which are not in any line with the fundamental principles of Christianity.

In 2010, Hugo Chavez said, “The cardinal disrespects the people of Venezuela and the state, the entire homeland, because he is making unfounded and reckless accusations, very similar to those of the coup plotters who continue to say that as I violated the Constitution, they have to overthrow me.” His comments came in response to serious accusations that the cardinal made days earlier against Chavez.

The cleric also participated in the coup d’état of 2002. At that time he served as bishop of the city of Valencia. After that sad episode, the cleric publicly questioned the Venezuelan court’s’ ruling against the police commanders who gave the order to murder the people [at Llaguno Bridge].