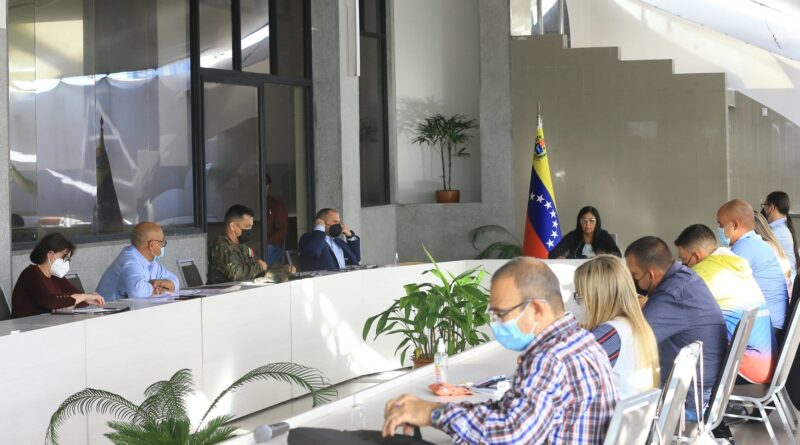 Venezuela’s presidential task force for the prevention and control of COVID-19 met this Thursday, December 23, to evaluate mechanisms to deal with the Omicron variant that has recently been detected in the country.

The meeting, chaired by Executive Vice President Delcy Rodríguez, was held at the headquarters of the Ministry of Economy, Finance and Foreign Trade.

At the meeting the attendees presented new proposals to reinforce biosecurity measures in the country and accelerate mass vaccination in the country.

Earlier on Thursday President Nicolás Maduro had informed that the first seven cases of the omicron variant of COVID-19 were detected in the country.

The cases were found in indiviuals who recently entered Venezuela through the Maiquetía airport, from countries in Europe, Central America and the Caribbean. They include a 20-year-old from Guatire who arrived on December 13 from Panama; a 32-year-old woman , a resident of Barquisimeto, who traveled from Istanbul; a young resident of La Candelaria, in Caracas, who came on a flight from the Dominican Republic.

As part of the program to deal with the arrival of the omicron variant in the country, it was reported that booster vaccination will start from January 3, 2022.

The Russian Sputnik Light vaccine (which is already in the country), the Cuban Abdala vaccine and the Chinese Verocell and Sinopharm vaccines will be used for booster shots.

To date, 87% of the Venezuelan population is vaccinated, and it is expected that the goal of 90% will be reached by December 31.

Heroic battle against COVID-19
In spite of the US and European blockade, Venezuela has been engaged in a heroic battle against COVID-19, with close cooperation of China, Russia and Cuba. Up to December 24, Venezuela reported 188 COVID deaths per million inhabitants, putting it in the second place for Latin American countries only behind Nicaragua that has registered 31 deaths per million inhabitants, according to the website worldometers.info.

According to a new COVID-19 website launched by the Venezuelan government and connected to the Patria system, the numbers of daily new cases, daily deaths and daily active cases have been showing significant improvement since the first week of October, as can be seen in the images below.

Featured image: Vice President Delcy Rodríguez, accompanied by other officials of the government, at a working meeting of the presidential task force on COVID-19 on December 23, 2021. Photo: Twitter / @ViceVenezuela