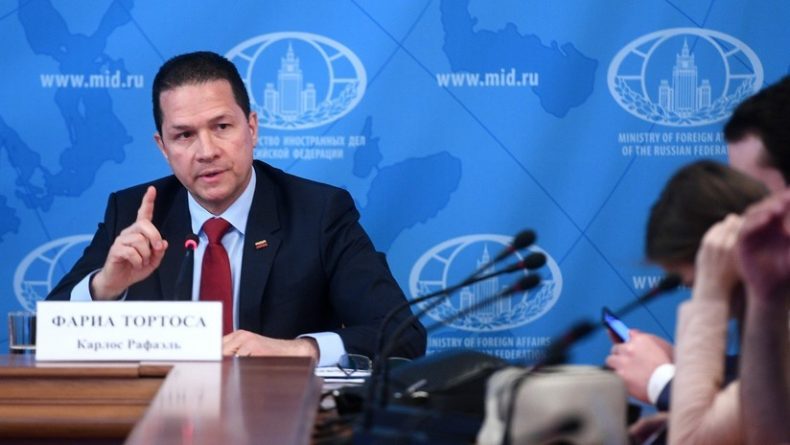 This Tuesday in Moscow, the Venezuelan ambassador to Russia, Carlos Rafael Faría Tortosa, offered a press conference to address the current situation in the Latin American country.

The diplomat described the consequences of the sanctions imposed by the United States against Venezuela. Among them, he mentioned the decrease in domestic oil sales, the increase in financial costs in the area of transport and the impossibility for the Central Bank to conduct transactions with dollars, among other fines and penalties.

At the same time, Faría Tortosa affirmed that the Venezuelan Government has already found a way to avoid the sanctions imposed by the US against gold mining companies in Venezuela.

“When our president announced that gold production in the country is recovering, the US government immediately banned any commercial relationship with our gold mining companies. We, of course, have already found ways to avoid these sanctions,” he said, adding that “in the same way we will act in relation to other measures that are being taken against our country.”

US Objectives In Venezuela

Faría Tortosa explained that the USA insists taking so-called humanitarian aid into the territory of Venezuela but these measures of economic restriction represent a pressure on the country whose aim is to worsen the situation and justify intervention in the internal affairs of the Latin American State.

“As a result of the economic blockade imposed by the United States, the losses [of Venezuela] are estimated at 130,000 million dollars for the period from 2015 to 2018,” he detailed. “With these funds, our country could move forward for nine years,” he added.

Faría Tortosa also named the banks that froze the monetary assets of Venezuela: more than 40 financial institutions in 17 countries. “Venezuelan resources have been blocked for an amount of 5.47 billion dollars in international banks,” said the ambassador.

“This is a large amount of money that we could use to buy what our population needs, such as drugs and medicines, primary product, equipment for our industry to increase production,” said the Venezuelan official. “We can not do it now,” he concluded.

In addition, the diplomat has stressed that the goal of Washington is “to overthrow the president of Venezuela, Nicolás Maduro”, change the political course established by the commander Hugo Chavez and “appropriate the country’s riches,” including oil reserves.

At the same time, the diplomat stressed that Nicolás Maduro’s position to resolve the political crisis within the country is to enter into a dialogue with the Venezuelan opposition.

The eviction at the Embassy in Washington, “violation of all international standards”

Regarding the eviction at the Embassy of Venezuela in Washington by the US authorities on May 16, Faría Tortosa was forceful. He has called it a “violation of all international norms”, including “the most elementary and well-known standard such as the Vienna Convention, where it is clearly established that any diplomatic installation in any country is totally inviolable”.

“With its actions, the US is opening a gap that we don’t know if it will have a cure tomorrow,” lamented the ambassador. The diplomat recalled that this is not the first time and similar actions “have already been implemented by the US government against the government of the Russian Federation”.

“A consular building was also taken in the city of San Francisco [United States]; they occupied the seat of the Russian government, which responded in a corresponding manner, and our government is also studying the measures that must be taken to be able to respond to this violation,” announced Faría Tortosa.