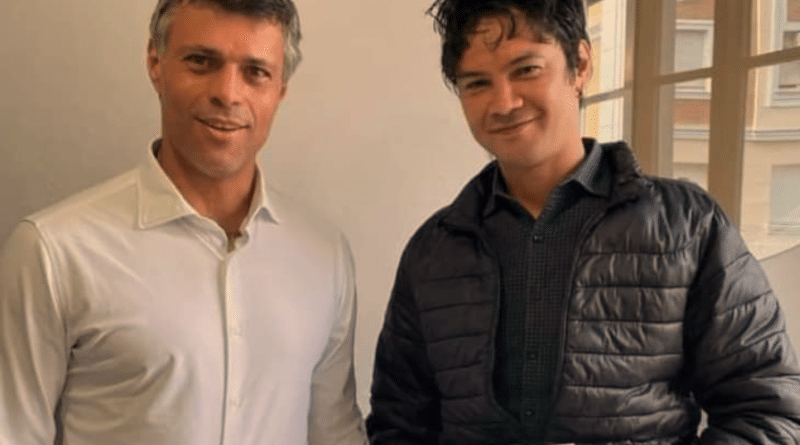 With a green light from the Spanish government, two runaways got together, both of them known for conspiring against the legitimate governments of their respective countries: Venezuelan Leopoldo López and Cuban national Yunior García.

This play date was put together by García, a Caribbean playwright and bold adversary of the Cuban Revolution who in recent months has dedicated himself to calling for destabilization by right-wing groups based out of the United States and feeding from the palm of Joe Biden.

López, on the other hand, remains protected in Spain after he escaped Venezuela with the help of the Spanish ambassador in Caracas in October of 2020. Once the April 2021 coup had failed, he fled after hiding in buildings with diplomatic status.

For his part, the Cuban opposition figure Yunior García arrived in Spain on Wednesday. According to the Spanish authorities he traveled on a tourist visa, with his wife, Dayana Prieto.

“Wasn’t this guy supposed to be persecuted by the Cuban government for thinking differently?” asked Argentinian sociologist and journalist Atilio Boron on Twitter. “How did he legally book a flight and make it through the airport then? The nerve!”

Complicit conspirators
The meeting between Leopoldo López and Yunior García was filled with all of the predictable narratives and diatribes, as both of them are puppets of the White House with blatant intentions of provoking changes in the governments of their respective nations via illegitimate and unconstitutional methods.

In light of this, analysts and Cuban media outlets exposed the parallels between García’s plans for La Habana and many of the actions of Leopoldo López, the mentor of the self-proclaimed “”interim president,” Juan Guaidó, in Venezuela.

“The Cuban playwright met with Venezuelan opposition figure Leopoldo López, who in 2019 led a failed coup against President Maduro,” wrote Puerto Rican journalist Luis De Jesús. “López even gave him a copy of his book. As they say, god creates them and Spain brings them together, is that how it goes?”

For example, analysts have highlighted how in 2014, the extreme right-winger López was the intellectual author responsible for many of the hubs of violence and arson which took place on the streets, called guarimbas, in which 43 Venezuelans lost their lives.

Similarly, Yunior García was received by José Manuel Albares, the Spanish Minister of Foreign Affairs, European Union, and Cooperation. The opposition figure is reportedly considering establishing contacts with far-right factions not just in Cuba, but in Venezuela and Nicaragua as well.