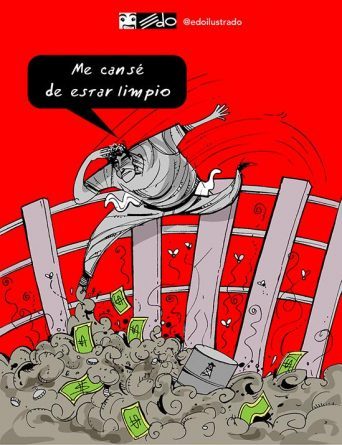 With Chávez we did a master’s degree in unconventional wars. We had deciphered the media war, the blockades, the revolutions of colors, the infiltrators, the NGOs as masks of the CIA, the State Department, the Pentagon. We became experts in detecting fake news, for being its main objective. Later, we learned about the law fare and saw where the shots go. Then the war came.

Before the war, there was a rapture with the heroic struggle of the brotherly peoples under attack. Cuba, a beacon of resistance. Allende’s Chile, a glorious death with his boots on, after resisting all kinds of sabotage, blockades, shortages planned by the enemy of all time, our enemy. The dignity of not breaking down, of not yielding, of not granting the enemy the satisfaction of being defeated. “First dead than on his knees” … Until it was our turn …

Then the dimensions of this war escaped the understanding of those who seemed to understand everything. So, all of a sudden, after living glorifying the resistance of other peoples, they knew that they could not live without fast Internet, without constant electric flow, without quality public services. And they began to wonder in whatever place someone could hear them, what the hell the war has to do with inefficiency, “because the light, the water, the ABA (broadband internet) are not bought in dollars,” they say, ignoring machinery, spare parts, blockades, thefts of strategic material, sabotage and not to mention the more than 500 years of colonial and neocolonial dependence, which, according to, should have been eradicated in the last 20 years with a magic recipe that -those who know everything- have.

And they were amazed when the chicken disappeared from the butchers from one day to the next, and the eggs, and the sugar, and the cookies, and the necessary stuff and not so, because the quality of life and such and such … They were surprised with the market of the war incarnated in the bachaqueros (blackmarket street vendors), speculators and hoarders, as if the black markets had been invented by us. And they faint with prices imposed by capital, their deadliest weapon, and they claim outraged that the government failed because the enemy, as is logical in any war, responded with a fierce attack to the first step (of so many that will be necessary) of the economic recovery plan that the President announced [last august] for the next two years (at least). That part they did not hear it.

And they look straight while skating along this winding and complicated road that no one has walked, they wrap themselves in a cloak of morality that is more arrogance than anything else. And the ink of lament runs and the lament spreads, seeking defeated applause, while banishing joy and splashing it with suspicion, so that it does not hinder, and in this war that not only wants to kill us with hunger, but first with sadness, only the ego feeds.

And the cool, the trendy, the nice, is the narrative of grayness, of despair, of the least detail of discouragement, of the man who sells vegetables and who saw me ugly under the eternal rain of Caracas, where the sun no longer rises like before [sarcasm]. Invisibilizing the crowd that leaves early every morning to face the day in the middle of this shower, when the easiest (and most useless, of course) would be to throw in the towel. Invisibilizing the heroic struggle that they once admired in other peoples and is now giving theirs. The narrative of surrender, of the arms dropped, of the complaint without proposal, of despair, of defeat. An act of suicidal ingenuity that ignores that we stake our lives on this, and that, for its arguments to square, it also denies that the first sentenced is Nicolás, who “is disconnected” (sarcasm), you know, for the revolution to go to hell , and the counterrevolution arrives to do what it does, and I won’t tell you about the law fare, that with Lula we have not seen anything … That Lula and Gaddafi would be little for the hatred that the right wing has for Nicolás, you know, because he destroyed Chavez’s Legacy (sarcasm)… Oh, wait! As easy as it would have been to betray him as Lenin betrays Ecuador …

In short, that in every war there are casualties, and it is painful to see them fall live through social networks, while I wonder what the Special Period in Cuba would have been like, with the tears of twitter, and the rumba of instagram and that thirst insatiable ephemeral and useless “Like” from facebook.

This article was originally published on the website of El Mazo Dando.