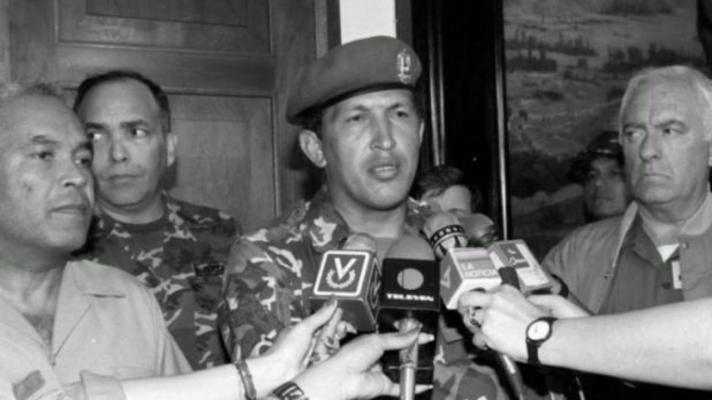 On the 4F [the 4 of February, 1992], I was a girl in my early twenties watching from my balcony, without knowing what was happening, without understanding almost anything, it was the beginning of a new era.

I grew up on that side of Venezuela where families were Adecas [supporters of Democratic Action] and Copeyanos [supporters of COPEI] and shared the table without confrontations, as some [right-wingers] say, trying to reshape our memory so that we feel nostalgia—that we do not have—for better times that were never really there.

Of course there was no confrontation, if both sides were the same, with minimal differences that were summed up in the ordinariness of adecos who stirred their whiskey with the little finger and the snobbery of the copeyanos who wrinkled their noses, but toasted with the adecos for the health of the bipartisanship that stuffed their jowls, their bellies and their bank accounts in Miami.

Alternating between Copeyanos and Adecos, they were so abusive that even in the East of the East [the wealthy barrios of Caracas] we were fed up with them: of Lauría’s cynicism, of Lepage’s arrogance, of Álvarez Paz’s drunken arrogance, of Morales Bello’s personification, of the little prop smile of Eduardo Fernández… tired of the rubble left by Blanca Ibañez [Carlos Andres Perez’s lover], of the blind street in which they put us, where hope was nothing more and nothing less than Carlos Andrés Pérez, the Gocho pal 88 [the slogan for his second presidential re-election]. “Don’t throw me anymore cards!” my dear Roberto Malaver would say.

We were there, in the middle of the adeco government of hope, drowning in the quagmire prepared for us by Miguel Paquetico Rodríguez (then Minister of Finance) and that group of young piranhas that were sold to us like the saviors, like the big thing, with Harvard diplomas and the Norven seal of quality [a local Venezuelan ISO standard] … in the middle of the moral and physical looting of a country that seemed to not be liked by anyone, there, February 4 finds us.

The panicked faces of the political leaders of that time told me that something good could be happening. The aggravated stutter of the already stuttering president was like a chill… that they, who had deceived us so much, who had defrauded us so much, were screwed, the truth is that, in some way, it made me feel vindicated.

That “for now” came to us like lightning to the chest
Then, Chávez came out, and all of Venezuela was glued to the television. That’s where we saw him: a military man taking responsibility in the “it wasn’t me” country. A guy, who we imagined had screwed up, who we thought was defeated -because those adecos and copeyanos were not going to forgive him after having shaken their tent-, standing there alone, with his dignity intact, still surrounded by his executioners, in a few seconds, with a few words, was able to give us hope.

That “for now” [por ahora] came to us like lightning to the chest. In that Venezuela, looted for decades through neocolonial resignation and finished off in the neoliberal scrapyard of the 90s. In that country of political bandits, whoremongerers and drunkards; of invertebrate soldiers, servile to a rotten power; there, in the most dire and darkest moment, we saw a light and we knew how to cling to it.

I remember that El Diario de Caracas published on its front page the big photo of Chavez with his red beret and his “for now.” I remember that we all cut that photo out, we stuck it on the elevators of the buildings, on the desks at work… I remember that I worked in a private school and on each billboard there was a photo of Chávez, as if to tell us that everything that had crushed us could end, and that it was going to end.

I also remember that a few days later, the school administration sent someone to collect all the photos of Chávez, so that not a single one remained, because the supervisor of the Ministry of Education came, democratically, to tell us what we could and could not say about the events of February 4. The supervisor was brief: it was forbidden to talk about Chávez.

But there was no supervisor or prohibition that prevented us from continuing to talk about him at school, in the bakery, in offices, workshops, universities… everywhere! And the saucepans banged every so often, and on the balconies and through the windows we chanted “Chá-vez, Chá-vez!,” and since then hope has borne his name.