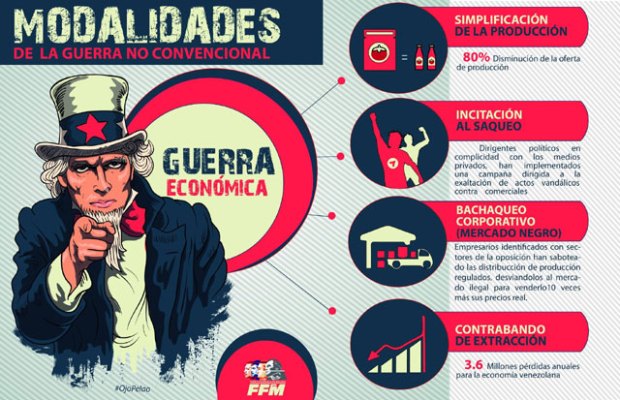 The attack on the currency is a long-standing weapon. It is part of the arsenal in unconventional wars. Of all, it is the most powerful. And like any massive weapon, it does not discriminate.

By manipulating the value of currencies and “depreciating” them, they make all imported goods more expensive, whether they are inputs for production or for final consumption. The cost structures are modified and with them the prices of all the goods and services of the economy. The objective of the attack is to trigger hyperinflation.

The increase in prices by more than 50% per month, which is how hyperinflation is defined, has devastating effects: it pulverizes wages; contracts production; it makes the public budget of expenses insufficient, generating fiscal deficits; money is scarce; stimulates hoarding; and if that were not enough, the exchange rate gap generated when they manipulate the currency, encourages smuggling of extraction [blackmarket exports].

The weapon acts psychologically on the expectations of the economic agents who, when observing continuous depreciations of the currency, adapt their decisions, referencing, more and more, in that exchange rate to mark all the prices.

Historically, this weapon has been used by imperialism with two objectives:

1) To overthrow governments that represent an unusual and extraordinary threat for the hegemony of the great capitals, for example, the European countries between the world wars, being Weimar a representative example; Nicaragua, 1988; Zimbabwe, 2008; Venezuela today.

2) Dollarize: practice of neo-colonization that seeks to perpetuate economic dependence. Among many, there are Ecuador, 1999 and Argentina, 1990. Do not forget that the owners of the dollar are not the US government, much less its people. The owners of the Federal Reserve are 8 magnates.

Today again they activate their main weapon. The targets are the currencies and the peoples of Venezuela, Yemen, Iran, Turkey, Argentina and, perhaps soon, Brazil. In our country, the attack on the bolivar has been 318,860,365% since 2013.

The theoretical and empirical demonstrations of what is written here are in the book Hyperinflation. Imperial weapon. We will present it at the FILVEN (International Book Festival of Venezuela) on Friday the 16th of November at 5 pm. Everyone is invited. The appointment is in the Historic District of Caracas.