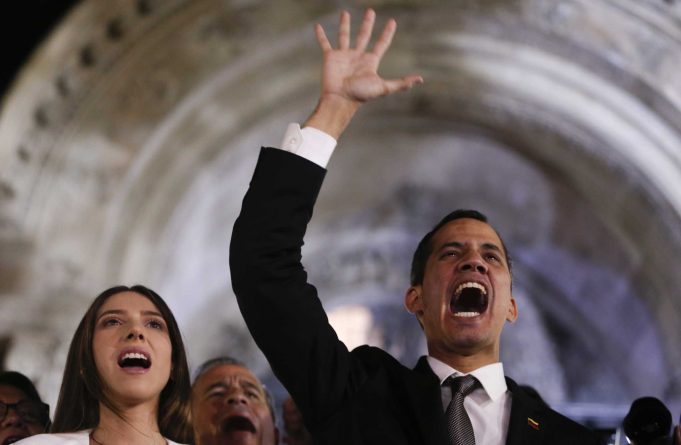 For the past month we have been wondering who is Juan Guaidó who strongly broke into international politics, recognized by several governments as President of Venezuela (!!!), without being elected, and quickly was also accepted by representatives of the Uruguayan right. Today Guaidó began to attack our comrade president Tabaré Vázquez simply because together with Mexico they undertook the only possible way that we understand, who love democracy, freedom, peace and especially dialogue. And of course, Guaidó does not agree with these positions. And we find a note written by Pablo Pozzi for the publication “Who is who” which we transcribe to our readers. It is just another contribution. Some readers may consider that it does not conform to the truth and that Guaidó is a complete democrat. Let’s take it then as an input to try to know what happens in Venezuela that seems to have become the center of the world.

I open the New York Times (well, click on its icon on the web) and I see that it has declared Juan Guaidó as someone “with a refreshing style and a vision to advance” Venezuela. At the same time, Bloomberg News insists that Guaidó is trying to “restore democracy,” and the Wall Street Journal declares him “a new democratic leader.” I loved it, I say because not only did I not know who Guaidó was, but I did not even know he existed. Luckily, these bulwarks of objective journalism, and the defense of democracy made it clear for me.

Well, until I got an email from my friend, the Canadian trade unionist Sid Shniad, who brought with him a long investigation by journalists Dan Cohen and Max Blumenthal. Both journalists must be very badly behaved (not to mention Sid who always was, like a good-natured little redneck) because they simply did something that other journalists have not done: check the web, interview specialists, read various NGO reports on Venezuela. And there, oh surprise, it turns out that the young Democrat Guaidó did not come out of nowhere. And much less is the face of democracy in Venezuela (well, and nowhere else). But who is Guaidó? What do Cohen and Blumenthal tell us?

First the simplest: Guaidó is a member of the Voluntad Popular party, founded by Leopoldo López and protagonist of the clashes called guarimbas that cost the lives of a couple of hundred Venezuelans between 2014 and 2017 (BTW, no one tells you that 70% of the dead were chavistas). Voluntad Popular is the most pro-American, neoliberal and intransigent sector of the anti-Chávez opposition, which rejects any kind of negotiation that does not imply a total purge of Chávez’s adherents and a dismantling of all the reformist programs of the last two decades. Lopez, in addition to being a neoliberal and far right, has received almost 50 million dollars of “democratic aid” from the organizations USAID (of the North American government) and National Endowment for Democracy (NED: a recognized front of the CIA), this according to the Spanish institute FRIDE.

Already in itself the above data make Guaidó a person more or less to distrust. But Cohen and Blumenthal set out to look a little further. The first thing they find is that

RELATED CONTENT: Guaidó, a “President” Without Territory, Without Army and With a Bitter Taste of Defeat

The Venezuelan government arrested several of the leaders of Voluntad Popular, accusing them of terrorism and possession of weapons of war. Among them were Freddy Guevara, Lester Toledo, Carlos Graffe, David Smolansky, Yon Goicoechea and Leopoldo Lopez. Several of them were released awaiting trial, and in that instance they went into exile, while Leopoldo López is under house arrest today. Let’s say that for the accusations that it is a savage dictatorship, the penalties for these opponents have been incredibly mild. Moreover, Smolansky escaped without much trouble to the United States after escaping to Brazil disguised as a priest. Once in Washington he tweeted that he had a “nice meeting” with Elliot Abrams, the famous architect of paramilitary squads during the 1980s and nowadays “special envoy of Trump” in Venezuela. For poor democratic students, these boys have remarkable access to many of the darkest characters in American politics.

The foregoing seems to have favored Guaidó, who went from being a founding, but secondary, leader to the standard bearer of Popular Will.

Guaidó did not come out of nowhere, nor is he a democrat worried about the lives of Venezuelans. That is very clear in Cohen and Blumenthal’s report. Obviously, neither the New York Times nor the Wall Street Journal echoed the investigation of Cohen and Blumenthal.  What for? If the State Department always tells you the truth, what more needs to be said.