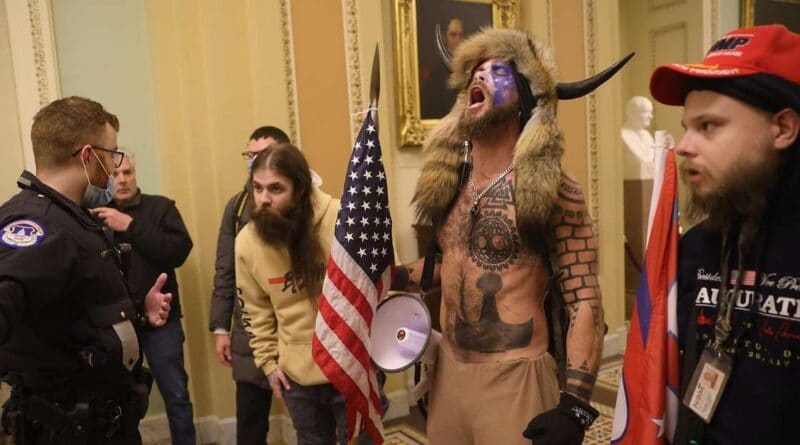 Okay, okay, let’s all cool our jets here for a minute. I know we’re all worked up about the twentieth anniversary of the 9/11 attacks, and that’s all well and good. But let’s not let our emotions cloud our vision and let today’s commemorations cause us to forget the real horror we must all remain focused on: the Capitol riot this past January.

It is true that losing nearly 3,000 American lives to weaponized passenger jets was pretty bad, but I think we can all agree that this pales in comparison to the earth-shattering terror we all experienced when watching footage of wingnuts wander aimlessly around the Capitol Building for a few hours.

In a July appearance on MSNBC’s ReidOut with Joy Reid, former Bush strategist Matthew Dowd said he felt the Capitol riot was “much worse” than 9/11 and that this is the “most perilous point in time” since the beginning of the American Civil War.

“To me, though there was less loss of life on January 6, January 6 was worse than 9/11, because it’s continued to rip our country apart and get permission for people to pursue autocratic means, and so I think we’re in a much worse place than we’ve been,” Dowd said. “I think we’re in the most perilous point in time since 1861 in the advent of the Civil War.”

Not to be outdone, Lincoln Project co-founder Steve Schmidt cited Dowd’s claim but added that not only was January 6 worse than 9/11, but it was actually going to kill more Americans somehow, even counting all those killed in the US wars which ensued from the 9/11 attacks.

“He couldn’t be more right,” Schmidt said at a town hall for the Lincoln Project. “The 1/6 attack for the future of the country was a profoundly more dangerous event than the 9/11 attacks. And in the end, the 1/6 attacks are likely to kill a lot more Americans than were killed in the 9/11 attacks, which will include the casualties of the wars that lasted 20 years following.”

Popular #Resistance pundit Majid Padellan tweeted back in February, “I am traumatized all over again while watching this video recap. Don’t try to tell me January 6th was NOT worse than 9/11.”

“I would like to see January 6th burned into the American mind as firmly as 9/11 because it was that scale of a shock to the system,” said Washington Post columnist George Will on ABC’s “This Week” roundtable back in May.

Huffington Post’s senior White House correspondent S.V. Dáte asserted on Twitterthat this year’s Capitol riot was worse than the September 11 attacks because “The 9/11 terrorists and Osama bin Laden never threatened the heart of the American experiment. The 1/6 terrorists and Donald Trump absolutely did exactly that. Trump continues that effort today.”

Dáte added that the events of 1/6 were “1000 percent worse” than if 9/11 hijackers had succeeded in crashing a Boeing 757 into the Capitol Building twenty years ago.

So that settles it, then: QAnoners meandering around a government building is far, far worse than thousands of people being killed in fiery explosions.

It’s a good thing we’ve got such sane, level-headed people on such prominent platforms instructing us on how to think about important events, because otherwise this perspective might never have even occurred to us. Especially since the FBI found no evidence that Trump and his allies were involved in coordinating the 1/6 riot and very little evidence of any centralized planning of any kind, and since we now know that the only person claimed to have been killed by the rioters actually died of natural causes, and since many other claims about the Capitol riot have been soundly debunked.

So now that we’ve cleared that up, let’s not let 9/11 stop us from screaming about 1/6 for all eternity, as loud as our lungs will allow. It’s important we remain rational here.