The film Ithaka, about the quest of Julian Assange’s father to save his son, made its U.S. premiere on Sunday in New York City. It is reviewed by Joe Lauria.

To the extent that the media has covered the tragedy of Julian Assange at all, the focus has been on politics and the law.

Consortium News, which has provided perhaps the most comprehensive coverage of the prosecution under the Espionage Act of the WikiLeaks publisher, has also focused more on the case and less on the man.

The great issues involved transcend the individual: war, diplomacy, official deception, high crimes, an assault on press freedom and on the core of what little democracy is left in a militarized and money-corrupted system.

Assange supporters sometimes also overlook the person and concentrate instead on the larger issues at stake. Ironically, it has been Assange’s enemies and detractors who’ve long focused on the person in the worst tradition of ad hominem assaults.

He has been attacked to deflect public attention from what WikiLeaks has revealed, from what the state is doing to him and to hide the impact on freedom in the media and standards in the courtroom.

There has been a steady and organized stream of smears against Assange, from ridiculous stories about him smearing feces on Ecuadoran Embassy walls to the widely reported falsehood that he was charged with rape. That case was dropped three times before any charges were filed, but the “rape” smear persists.

The US Against Assange: A Torrent of Evil

These personal attacks were planned as far back as March 8, 2008 when a secret, 32-page document from the Cyber Counterintelligence Assessment branch of the Pentagon described in detail the importance of destroying the “feeling of trust that is WikiLeaks’ center of gravity.” The leaked document, which was published by WikiLeaks itself, said: “This would be achieved with threats of exposure and criminal prosecution and an unrelenting assault on reputation.”

An answer to these slurs and the missing focus on Assange as a man is Ithaka. The film, which made its U.S. premiere Sunday night in New York, focuses on the struggle of Assange’s father, John Shipton, and his wife, Stella Assange, to free him.

If you are looking for a film more fully explaining the legal and political complexities of the case and its background, this is not the movie to see. The Spanish film, Hacking Justice, will give you that, as well as the more concise exposition in the brilliant documentary, The War on Journalism, by Juan Passarelli.

Ithaka, directed by Ben Lawrence and produced by Assange’s brother, Gabriel Shipton, humanizes Assange and reveals the impact his ordeal has had on the people closest to him.

The title comes from the poem of that name by C.P. Cavafy (read here by Sean Connery) about the pathos of an uncertain journey. It reflects Shipton’s travels throughout Europe and the U.S. in defense of his son, arguably the most consequential journalist of his generation.

The story begins with Shipton arriving in London to see his son for the first time behind bars after the publisher’s rights of asylum were lifted by a new Ecuadoran government leading to him being carried out of the embassy by London police in April 2019.

“The story is that I am attempting in my own … modest way to get Julian out of the shit,” Shipton says. “What does it involve? Traipsing around Europe, building up coalitions of friendship.” He meets with parliamentarians, the media and supporters across the continent. Shipton describes the journey as the “difficulty of destiny over the ease of narrative.”

He speaks to the European Parliament in Strasbourg and the German Bundestag in Berlin. In Paris, Shipton admits to supporters that “he’s not okay, but I say he’s okay not to worry people.”

He tells a Paris radio interviewer that he did not see Julian from the age of 3 until his mid-twenties, but that his mother, Christine Assange, called him “Wizzie” for wizard. Shipton tells of the earliest conversations he had with his son about secrecy that eventually led to the formation of WikiLeaks. 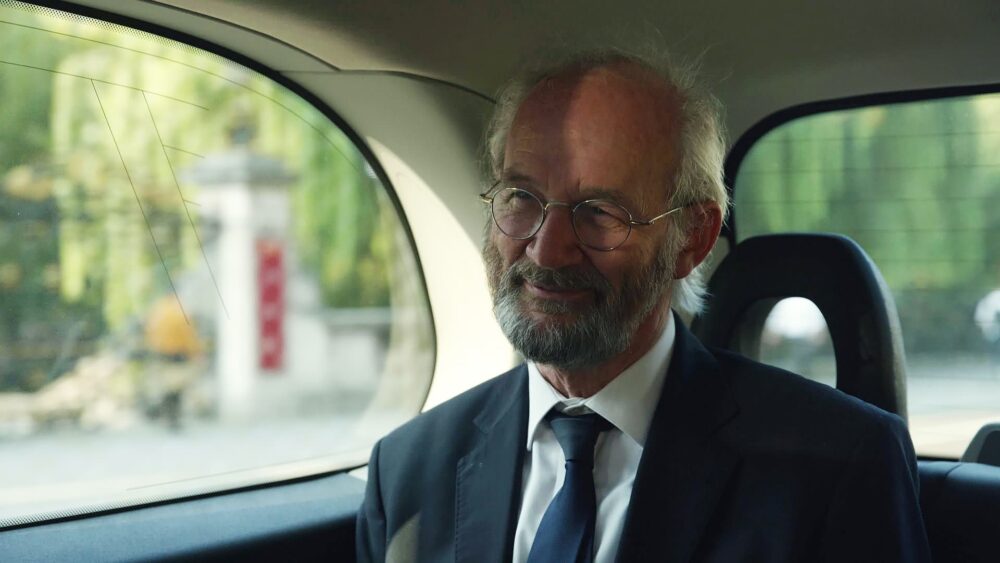 John Shipton in a scene from Ithaka.

We learn that Julian Assange’s frustration with the inability to stop the 2003 Iraq invasion, despite the largest, worldwide anti-war protests in history, motivated him to start WikiLeaks.

The releases he published about the Iraq and Afghanistan wars, leaked by Army intelligence analyst Chelsea Manning, were published not only by WikiLeaks but by its partners at The New York Times, Der Spiegel and The Guardian, yet only Assange has been prosecuted.

The main focus of the film is the extradition hearing in Westminster Magistrate’s Court that began in February 2020 and ended in September of that year.

In the lead-up to the hearing we see the family gathered together. The sympathetic Shipton is a complex, at times cantankerous and humorous subject, explaining how important family is to him at this stage of his life as opposed to when he left school and burned a pile of family photos. 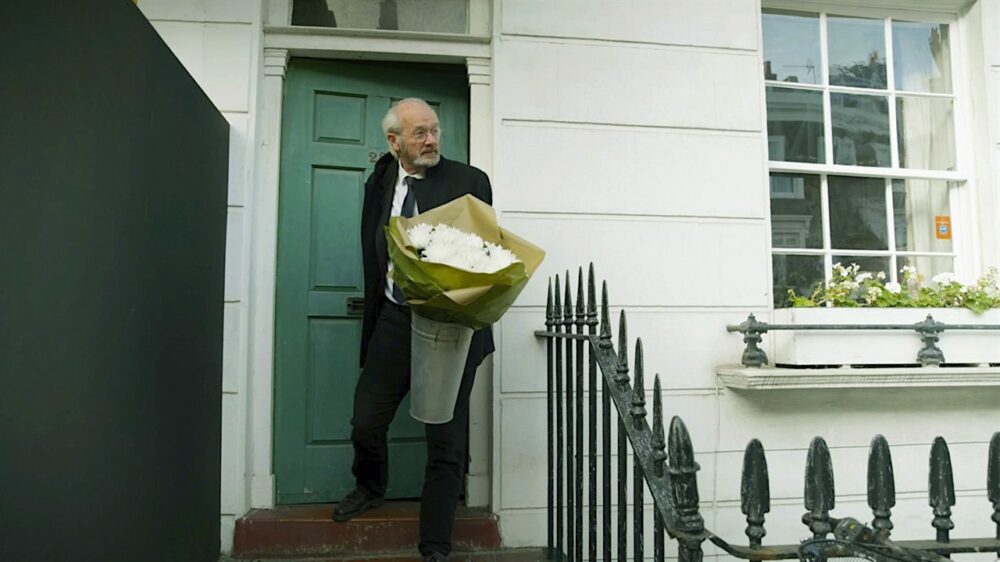 The film explores the romance between Stella and Julian Assange, which began inside the Ecuadoran embassy in 2015, where we see grainy C.I.A.-ordered surveillance films of them meeting.

Stella speaks about their decision to start a family while there were no charges against him, and no known investigation and after a U.N. panel had ruled he was being arbitrarily detained and should be released.

But then Donald Trump was elected and his C.I.A. Director Mike Pompeo makes Assange and WikiLeaks the top U.S. public enemy. It was Pompeo we learn who then discussed plans to kidnap or poison Assange in the embassy.

Assange was then arrested, leading to the extradition process that still continues in London.

One of several scenes that drives home the personal side of the story is audio of Assange speaking from Belmarsh Prison to Stella about what children’s books to read to their two sons. In another scene, we see Assange briefly in prison during a video call on Stella’s phone. She shows him sunlight and he enjoys the sound of a horse on the street.

The toll it is taking on Stella is seen as she breaks down emotionally during the recording of a BBC interview that has to be paused. 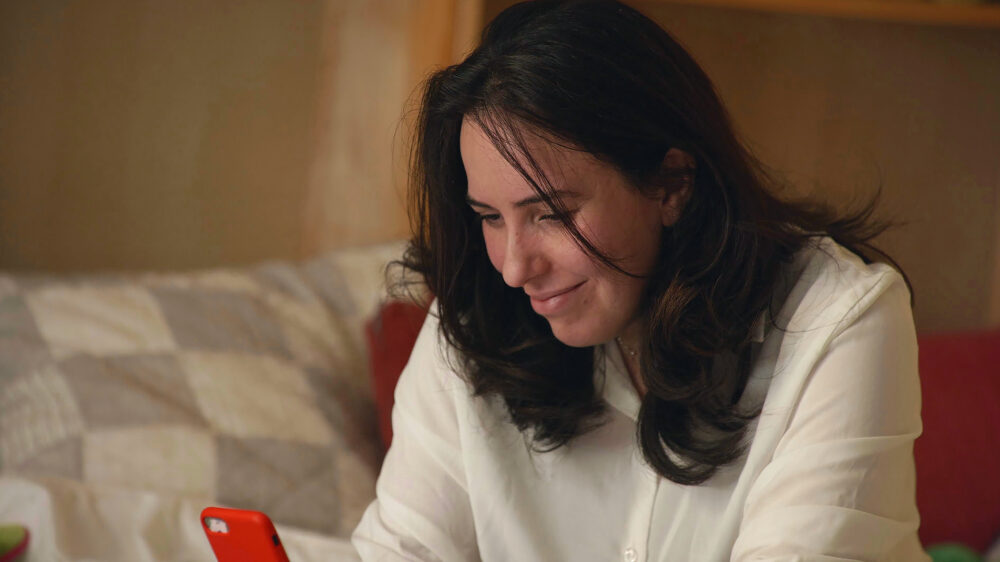 Stella Assange in a scene from Ithaka.

“Extraditions are 99 percent politics and one percent law,” Stella says. “It is entirely the political climate around the case that decides the outcome. And that is shaped by the media. For many years there was a climate that was deliberately created through false stories, smears; through a kind of relentless character attack on Julian to reduce that support and make it more likely to successfully extradite him to the United States.”

Assange’s Brother Gabriel Shipton Speaks to the WSWS: “The CIA Plan to Kidnap Julian is Continuing Under a Veil of Legality”

“This is the public narrative that has been spread in the media for ten years,” Nils Melzer, the now former U.N. Special rapporteur on torture, says in the film:

“No one has been able to see how much deception there is. Why is this being done? For ten years all of us were focused only on Julian Assange, when he never wanted it to be about him. It never was about him. It was about the States and their war crimes and their corruption. That’s what he wanted to put a spotlight on – and he did. And that’s what made them angry. So they put the spotlight on him.”

“He just needs to be treated like a human being,” says Stella, “and be allowed to be a human being and not denied his dignity and his humanity, which is what has been done to him.”

Ithaka made its first theatrical showing in the U.S. at the SVA Cinema, 333 W. 23rd St, New York, N.Y., on Sunday, Nov. 13, at 7:45 pm. There was a Q&A following the first screening with Ben Lawrence, Gabriel Shipton, Adrian Devant, amnd cinematographer Niels Ladefoged.