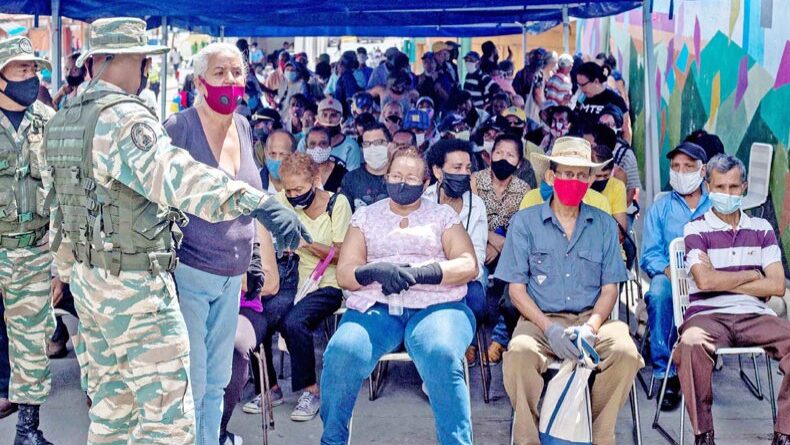 Traveling around Venezuela in 2005, it occurred to me that it the paint merchants must be doing very well. There had been a recall referendum the year before. The question on the ballot was a simple yes or no: Shall President Hugo Chávez be recalled? The word “NO” was still painted on walls, pillars, even random rocks along the highway everywhere I went, reflecting the fact that he had won the vote, 59 to 41 percent, more than a year before.

But the opposition refused to accept those results, saying that there had been electoral fraud. The Carter Center and other international observers said they didn’t see any, and when they tried to investigate stories circulating, nothing factual turned up.

In 2005 Venezuela was still trying to recover from the employer lock-out and corporate strike that crippled the economy after the anti-Chávez coup of 2002 was thwarted by a massive popular uprising. There were signs of poverty everywhere—people sleeping in doorways, begging, sitting at tables on the street hoping to sell a few trinkets to be able to eat.

I was struck though, by how many street vendors had racks of books with laws—basic laws about the rights of workers, education, land reform, indigenous and other minorities, elections, fisheries, and on and on. The biggest seller was the Bolivarian Constitution, in editions of every size, including little pocket sized ones that people carried around. I saw people buying those books on the street and reading them on the subway and in parks, a constitution that said that they have a human right to a job, housing, health care, education, and everything else that people need. Studying the new laws intended to make those rights real.

An election was coming up on December 4, 2005; the country was getting ready to elect a new National Assembly, the legislative body. There were people in line at street corner registration centers signing up to get a cédula, the official identity number that is used for voting, as well as everything else that involves filling out forms, like credit cards, bank accounts, etc. Many poor people had never had a cédula, but now there were reasons to get one, to fully participate in all the things that had previously been reserved for the middle class.

In sum, given all the new voters and the level of enthusiasm for the revolution among the poor—a big majority—there was every reason to believe that Chavistas would do very well. But there was a problem.

The Chavista government had introduced a new voting system, intended to make elections secure. The voter puts their thumb into a fingerprint reading device that matches their thumbprint to their name and cédula. Their vote is registered on a machine which also prints a slip of paper saying how they voted. The voter can check to see that the votes printed on the paper are the same as the ones entered into the machine, and that slip of paper is deposited in a ballot box. After the election 54 percent of all ballot boxes are randomly selected and opened in the presence of representatives of all the parties, so the paper print-outs can be matched to the figures reported from the machines. (The Carter Institute declared this Venezuelan system to be the best in the world.)

The opposition, however, raised objections to the system, claiming, among other things, that the government was going to somehow figure out how people had voted by matching the machines’ record with the order in which they voted. After a long process of negotiation, the National Electoral Counsel agreed to many opposition demands, and the country prepared for the contest on Sunday, December 4.

I happened to be in the mountain city of Merida on Thursday, December 1, when the news came: The opposition was pulling out of the election, telling their supporters to stay home! They claimed the election was rigged, the Chavistas were going to engage in massive fraud, and they refused to participate.

Given that the government was making progress on most problems, and that the opposition parties had tried so hard to sabotage the economy, it seemed obvious that the lower classes were set to deliver a big majority of delegates to the Chavistas. Crying “Fraud!” was a ploy to avoid another humiliating electoral defeat.

The position of the United States government, and the corporate media who promote its point of view, has been that Venezuelan elections are so corrupt that the opposition has no chance of winning. They have passed on wild stories of violent intimidation and blatant fraud that turn out to have no substance when they are investigated—just internet rumors.

Proof that Chávez was willing to accept electoral defeat came in 2007, when he proposed a package of reforms involving more than sixty changes in the constitution. The proposal failed by a 51 to 49 percent vote. Chávez accepted the results with the remark that it was better to lose than to win by such a close vote.

Claims of fraud have been advanced to excuse violence. After Enrique Capriles lost a close election to President Maduro in 2013 he told his followers to ‘discharge their rage,’ which they did by attacking Cuban staffed medical centers, killing several defenders, based on the bizarre rumor that ballots were being hidden in them.

The accusation of electoral fraud has been a standard feature of U. S. promoted regime change efforts. If it is backed up with sufficient violence it can be an effective propaganda cover for a coup, as happened in Bolivia. But even in cases like Venezuela, where it is widely understood to be “fake news,” it can have a destabilizing effect, undermining the authority of elections and providing justification for violence.

It is a strategy that has come home to roost.

Featured image:  Venezuelans wait their turn to vote at the Jose de Jesus Arocha public school in Petare, Caracas, during a mock election for the upcoming parliamentary vote, on November 15, amid the COVID-19 pandemic. — Agence France-Presse/Cristian Hernandez

Peter Lackowski is a retired Vermont school teacher who has been visiting and writing about Latin America, including Bolivia, since 2004. See his CounterPunch report from Venezuela this May.