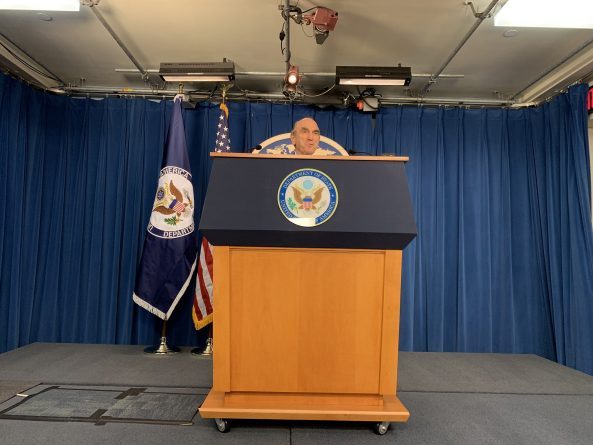 The US special envoy for Venezuela, Elliot Abrams, affirms in a press conference that all the options are on the table. And doing this shows how erratic the US operation against the South American government is.

The US special envoy for Venezuela, Elliot Abrams, affirmed on Tuesday that the White House does not rule out imposing secondary sanctions against the Government of Nicolás Maduro in Venezuela, although they have not reach that level yet.

“It’s a possibility, but it’s not yet time,” Abrams said during a press conference.

Abrams said the US Government has many plans on the table against the “Maduro regime”, including the use of the military, although “that is not the way” they have taken.

“Our policy is diplomatic pressure, although all options are on the table, we have not chosen the military option,” he said.

The US special envoy said that they consider imposing sanctions on actors from third countries in response to the Venezuelan crisis. For the moment, Abrams said that “there will be more revocation of visas and cancellations” for officials linked to Maduro.

Sanctions against Cuba
The Abrams conference comes a day after the US Government Security Advisor and the White House, John Bolton, pointed out that the administration of President Donald Trump will take measures against Cuba for supporting the president of Venezuela, Nicolás Maduro .

“The role of Cuba in the usurpation of democracy and the promotion of repression in Venezuela is clear, which is why the US will continue to adjust financial restrictions to Cuba’s military and intelligence services. The region must condemn the Cuban regime”, Bolton wrote in his Twitter account.