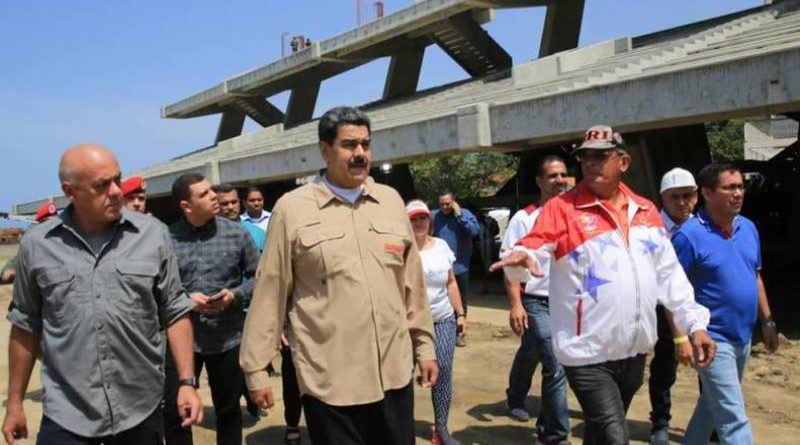 This Saturday, March 2, the President of the Republic, Nicolás Maduro, reported that the Carlos “Café” Martínez stadium located in the state of Vargas, with a capacity of 15,000 spectators, and future headquarters of the Tiburones de La Guaira professional baseball team, will be inaugurated in November this year.

“In the month of November of this year we will deliver the new headquarters of Los Tiburones de La Guaira, where a great baseball school will operate so that our children and teenagers can develop their talent and continue to fill our beloved Venezuela with victories,” explained the President when making an inspection of the work’s progress.

The inspection was made with the governor of Vargas, Jorge Luis García Carneiro; the Vice President of Communication, Culture and Tourism, Jorge Rodríguez; the first fighter, Cilia Flores , and other authorities.

RELATED CONTENT: Venezuela Rejects the Change of the Venue for the Caribbean Series 2019

Prior to that, the Head of State supervised the construction of the Grand Hotel Complex of Bahía de Caraballeda, made up of the Hotel Caribe and the Hotel Guacamacuto.

“Tourism is vital in the new economic stage of the country, so we develop large infrastructure projects that will increase our ability to receive tourists and allow us to diversify the national income to invest in social programs,” he said.

In February 2018 Governor Carneiro held a press conference and announced that the first part of the project was going to be ready for April 2018, referring to a Baseball School. In that sense is evident that there is a delay in the project that might be connected the economic situation of the country but also reflects the lack of commitment to reach deadlines that has historically affected Venezuela and that needs to be fixed.

The project
According to the website Correo del Orinoco, The resident engineer of  Los Tiburones Stadium Consortium, Enrique Moreno, added that the work will have capacity for 15,000 people in stands, and two underground water tanks of 250,000 cubic liters.

“Since we restarted the works on January 8 we have not stopped. We are currently in full development emptying the slabs of the upper bleachers on the east side and the development of the columns at the west end of these bleachers, “said the expert, who noted that all work is done under special protection standards taking into consideration that the structures will be exposed to marine saltpeter.