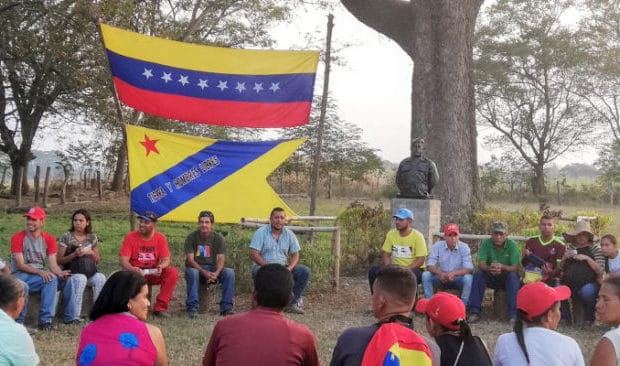 On March 5, 2009, Comandante Chávez reaffirmed, with a government decision, a central policy of his vision of socialism: the frontal struggle against the “latifundio” and the push for popular organization as the center of the revolutionary democracy, that is, generating conditions for the people to build spaces of self-government in their territory for democracy in the social, political and economic spaces.

This is how El Maizal Commune was born, the recovery of some estates from latifundio and delivered, as a sacred fire, by Chávez himself, 10 years ago.

Since that day a lot has been done, important triumphs that are references for the Venezuelan popular movement and beyond, as well as setbacks that become a concrete reflection of the Bolivarian revolution’s realities, its tensions, its possible paths, that today seem necessary to resume in the action and revolutionary debate in the situation of intensification of the attacks from the “empire”. Going back demands correcting errors reaffirming the fundamentals of the Bolivarian revolution: all the power to the people!

With a structure, which as an eternal whirlwind, works day by day, with its communal parliament, its work agencies, its services, production and distribution companies of Communal Social Property, they are advancing in conjunction with other communes of Simón Planas Municipality, driving a movement that fights multiple daily battles, in the electoral field, so to speak, they have achieved the triumph of the territorial constituent, the mayor (not recognized by the arrogance and blindness of power) and are today the majority in the municipal chamber, besides being a decisive support for the triumph in Lara Governor race and in President Nicolás Maduro’s one.

On March 5, 2013, Comandante Chavez was sowed forever in his people’s hearts, his physical departure converts a greater pain into the necessary force to push El Maizal Commune to double its efforts.

Therefore, they are an example of constant work, with much still to go, to consolidate, to improve, is what always emerges from any conversation with its members, who with humility and certainty, with all the progress made, pose even in the times in which the panorama tries to impose the defeat and demoralization, the tools to advance.  Not giving up is a revolutionary action to deepen what has been done. In the last three years, in the framework of economic warfare and attacks of the most diverse dimensions, land and facilities for production have been recovered as never before and we go for more.

We celebrate our 10th anniversary, commemorating the sowing of our Chávez

There are many activities planned in the framework of the anniversary, several internal work, for the strengthening of the commune and its lines of work, others in which we invite all who have been part of the common process, and those who wish to join in this celebration, to be held on March 05.

RELATED CONTENT: Iturriza “There are Only two Positions in Venezuela”

There was a review of the journey of their own efforts, the important progress, the pending tasks, and also how the current national situation has affected daily life overwhelmingly in all areas, demanding the adjustments being made by the community organization to rise to the level of the moment be deepened, maintaining itself as a necessary territorial framework to revert what was lived and to consolidate the socialist way to overcome the crisis.

On Sunday , March 3, there will be an internal working day with all the producers of the Commune, to plan what is to come, celebrating what is happening, without losing sight of what should be consolidated.