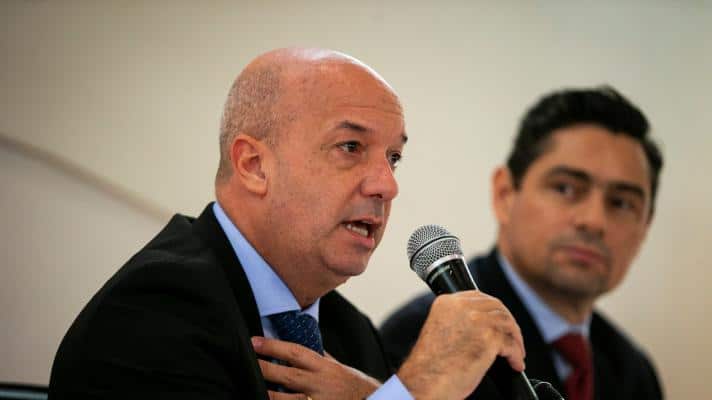 With all the billion-dollar attempts to overthrow Chavismo having failed, it is the turn of the Colombian paramilitaries and their Creole franchises. Creating chaos—Iván Simonovis, choking with sadism, revealed in a video, like a Batman villain, in which he explains his secret plan like counting chickens before they are hatched, celebrating a victory that will never come.

Chaos—that has been the proposal of a group of snob psychopaths recruited by Washington as its political hitmen. Chaos for a country they despise, which is nothing more than a tit from which to suck until it is dried out, to sell off in pieces while there’s still some left, as it always had been…

The Batman villain congratulates himself because the El Coqui gang rains down bullets in Caracas and is synchronized with the Colombian narco-paramilitaries on the Apure border. The Joker Penguin celebrates the achievement because, as he himself explains, his plan for our country—not his—is to wreak havoc.

The chaos of turning bloodthirsty criminals into victims of the government that fights them. Upper-class criminals and their henchmen from the barrios and countryside. They are Rastrojos [the Colombian drug cartel], all of them, the paracos [paramilitaries], the journalists who whitewash them, the NGOs that elevate them to libertarian martyrs. Criminals who do not hide the pleasure caused by the death of our soldiers—who do not have human rights, of course, because chaos also means stripping humanity from anyone who defends Venezuela from chaos.

Chaos: a pandemic without vaccines, without medicines, with millions of non-existent body bags. They block vaccines and demand vaccines for all, while they wail on behalf of the dead who we did not allow to die.

Chaos to prevent another possible world. To prevent a world in which all the children eat, in which all can go to a school. May the slaves continue to be slaves, may the joy fade, may it be overcome by suffering and despair, this is the only hope of the sowers of chaos.

The same chaos of the coup, the oil sabotage, the guarimbas in all their editions, increasingly violent… The chaos of Lorenzo’s economic war, the chaos of sanctions, of the interim moron and his government of snot, the chaos of the looting that they manage, and direct, in exchange for millionaire crumbs that fill Fabi and Lilian’s fridges.

The chaos that metabolized hatred, and turned it into morality and good manners, as well as cynicism. The hatred and cynicism that justified the burning of people alive, that dehumanized their victims, that applauds every aggression against Venezuela, that allows Simonovis to share the macabre plans of its originators as if it was an act of heroism. He who condemns the hunger that their sanctions generate, while they laugh over lunch on a five-star terrace in Madrid. He who denounces corruption while his pockets overflow with looted dollars, with his parasitic relatives squandering their obscene newfound riches in Miami, Madrid, and Bogotá…

The chaos that took hold of the opposition, held captive by these decaying snobs, pulverizing it, paralyzing it, leaving it with no recourse other than chaos. Like a snake that bites its own tail and remains trapped in its circle, there is hatred and violence towards some who do not know how to get out of there, who do not understand that politics can function, that the shit their leaders dragged them to live through has nothing to do with politics; they suspect anyone who wants to work to better their country, and accuse them of being a “collaborator” in the best of cases, of a Chavista in the worst.

The opposition chaos still imprisons many who, although horrified by so much aggression against this country they love, do not know how to raise their voices to defend it, without first making excuses, because the agents of chaos have imposed on them the idea that defending Venezuela is a matter for Chavistas—with great honor.

The chaos that we contain at all costs: with courage, with our nails, with teeth, with a cool head and nerves of steel, with dignity and conscience, and yes, with a lot of pain, but, with each blow we gain more force and more conviction that we will win. Venezuela vencera!