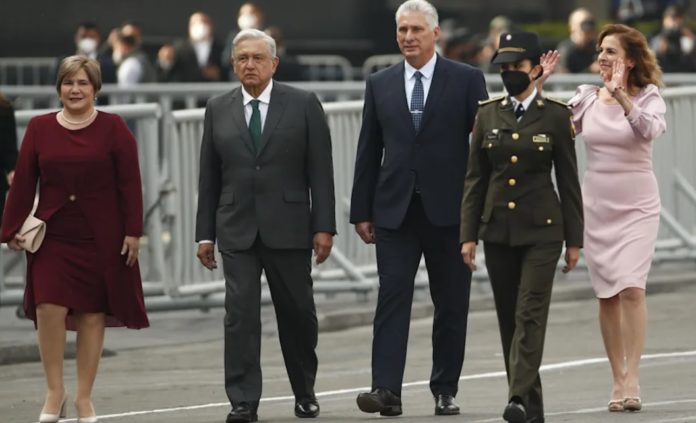 As part of the commemoration of the 211 years of the Independence of Mexico, the annual military parade, held in Mexico City, had Cuban President Miguel Díaz-Canel as this year’s guest of honor. In a speech given before the parade, Andrés Manuel López Obrador (AMLO), President of Mexico, highlighted the injustice suffered by the Cuban people due to the ongoing US blockade, and urged US President Joe Biden to lift the blockade against Cuba.

“The government that I represent respectfully calls on the US government to lift the blockade imposed on Cuba, because no state has the right to subdue another nation, another country,” declared the president of Mexico. “It is necessary to remember what George Washington said: ‘Nations must not take advantage of the misfortune of other peoples.’ To put it frankly, it looks bad for the US government to use their blockade as an impediment to the well-being of the Cuban people so that they are forced by necessity to confront their own government.”

Moreover, during the Independence Day celebrations with President Díaz-Canel as guest of honor, López Obrador expressed his staunch support for the Republic of Cuba. Obrador considered that the Cuban people “should be declared a Heritage of Humanity” for “having resisted for 62 years without surrendering” and that his position goes beyond “agreeing or not with the Cuban revolution and its government.”

RELATED CONTENT: Mexico on the Bicentennial of Its Independence: Closer than Ever to Our America and Further Away from Empires

“Miguel Díaz-Canel represents a people who, like few others in the world, have known how to defend their dignity, their right to live free and independent, without allowing any foreign power to interfere in their internal affairs,” emphasized the Mexican president.

Díaz-Canel thanked Mexico for decade-long support of revolutionary Cuba
For his part, Miguel Díaz-Canel expressed his gratitude for the overwhelming support that Cuba has received from Mexico.

“I pay tribute here to the sustained, non-wavering, passionate and firm solidarity that we have always found in this land,” announced the president of Cuba. “Over the years, the common history that has inextricably united our two peoples has never been broken: our two countries have honored their sovereign policies regardless of proximity or distances between their respective governments… a very Mexican principle: respect for the rights of others is peace.”