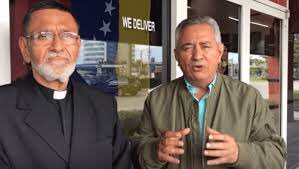 This Wednesday the political anti-Chavista leader Pablo Medina, who has belonged to several opposition parties, said in an interview with Jaime Bayly from Miami, that he has a “Liberation Army” which will defend Venezuela from President Nicolás Maduro.
This statement was taken as a mockery by hundreds on Twitter, to the point that the name of Pablo Medina became a trend.

RELATED CONTENT: Russia will Deploy its Missiles in Venezuela “Happily”
“What did this man smoke now?” Said a user linked to the opposition. Other users said they did not believe in Medina nor in Guaidó.
Pablo Medina, who is in “exile” in the State of Florida (USA), said he has already raised part of the money but they need to raise $ 400,000 to finance this civic-military movement and also that he has secured “other sponsorships.” Bayly even took the step of helping to request donations to a Wells Fargo bank account.

RELATED CONTENT: War by Other Means: How the Unofficial naval Blockade Against Venezuela Operates He also said he has the support of María Corina Machado, Carlos Ortega, Diego Arria, among other opposition spokespersons.
“Pablo Medina is broke and says he has an invisible army of 10,000 men,” another user scoffed (@Gustavo1942hot1) on twitter and another very low level anti-Chavista activist also living in Florida, Jose Palmar, posted on his twitter account that he could guarantee Pablo Medina’s modest way of living.