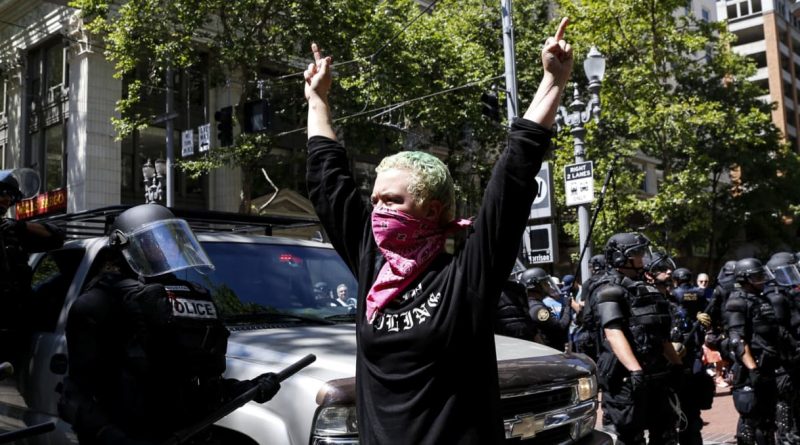 After an anti-fascist punched a right-wing journalist in Portland, militant anti-fascists and Antifa have been branded as ‘violent gangs,’ even ‘terrorists.’ Those definitions are completely wrong.

This comes in the wake of a series of conflicts between far-right journalistic provocateur Andy Ngo and activists protesting a rally organized by the self-described “western chauvinist” Proud Boys in Portland, Oregon.

Antifascist counter-protesters organized a dance party and gave away vegan milkshakes, a reference to an antifa meme celebrating the dousing of high-profile European fascists with the beverage, in festive opposition to the far-right rally.

Mr. Ngo, who has a reputation for embedding with far-right activists and maligning the left and anti-fascists in particular, was soaked with milkshakes, punched by a masked anti-fascist, and covered in silly string.

As a result of mass media exposure of this incident, militant anti-fascism is once again decried as everything from gang violence to terrorism. Yet, if we place the episode in the context of a broader dynamic between opposing social movements, the actions of militant anti-fascists are a form of self-defense – just as they claim.

As a sociologist, I have been formally studying militant anti-fascism for well over a decade. In this formal research, I interviewed both militant and non-militant anti-fascist activists and conducted ethnographic research with formal antifa groups. I have spent time in meetings, observing activism, and engaging in the culture of anti-fascism.

What I found in my interviews and experiences is that militant anti-fascists experience tangible and immediate threats from fascists and respond out of a practical need to defend themselves from those threats.

For most people, fascist activism and organizing are abstractions removed from their daily lives; images on television and news reports, cartoonish villains. For the antifa activists whom I researched, fascists represented an intense and immediate threat.

Many militant anti-fascists become involved in this form of activism because aspects of their identity are directly targeted by fascist violence; they are queer, transgender, gender non-conforming, people of color, Jews, Muslims, Sikhs, and certainly identified in ways that intersected across these categories.

For them, anti-fascism was a means of ensuring their safety from a movement that threatens their very existence and venerates violence as the highest form of action. Even the antifa activists who identify as cis heterosexual white males are the targets of fascist violence as “race” and “gender” traitors.

Antifa activists routinely describe both verbal threats and physical assaults made against them by fascists. Those who suffered from physical assaults often struggled from PTSD as a result of fascist violence.

Experiencing fascist violence is such a routine aspect of militant anti-fascism that it is understood as coming with the territory of being involved this form of activism. People become antifa because of the threat of fascist violence, and as antifa they continue to bear that threat.

Anti-fascists point out a pattern of fascist violence within recent American history. Beyond the routine assaults activists experience that do not become part of the recorded history of the movement, fascists have actually murdered their opposition.

From the murder of Dan Shersty and Lin “Spit” Newborn in Las Vegas 1998 to the stabbing of three people, two of whom died from their wounds, in Portland in 2017, to the murder of Heather Heyer in Charlottesville in 2017, fascists have demonstrated their capacity and willingness to kill their opposition.

Fascists bring this violent intent to their protest mobilizations. In Portland, as in many cities across the U.S., when far-right activists rally, they routinely attack anti-fascist counter-protesters; and on May Day this year, they launched an attack on celebrants at Cider Riot, a local brewery and pub that openly supports anti-fascist activism and events.

From a militant anti-fascist perspective, the role of the police has been either ineffectual or outright complicit in fascist violence. It is a criminological truism that police rarely arrive to an incident in progress. A great deal of anti-fascism is informal and spontaneous response to fascist presence in a subcultural or public space. Such “everyday anti-fascism” intervenes against an immediate threat long before any law enforcement could arrive on the scene.

In the case of protest scenarios, especially in Portland, there is evidence of collaboration and collusion between far-right protesters and police with officers engaging in friendly banter with far-right leaders via text message and police logs indicating the targeting of anti-fascists while ignoring armed alt-right activists.

In this context, antifa activists view their actions as the only means of defense against a demonstrable threat from fascist activists. Militancy becomes a move designed to match the violence of far-right activists with a counter-veiling force. I noted after Charlottesville the danger of drawing an equivalency between the violence of the far-right and militancy of antifa activists, and it rings true today.

In response to fascist organizing and even threats of violence, antifa activists mobilize public shaming and confrontational protest. They do so as part of a countermovement strategy designed to demobilize the fascist movement, and in doing so secure the safety of themselves, vulnerable populations, and their communities.

Stanislav Vysotsky is an Assistant Professor of Sociology and Criminology at the University of Wisconsin – Whitewater. His research has been published in journals including Interface: A Journal for and about Social Movements, Critical Criminology, and the forthcoming book “Inside Antifa: The Tactics, Culture, and Practice of Militant Antifascism” (Routledge). Twitter: @professor_stas