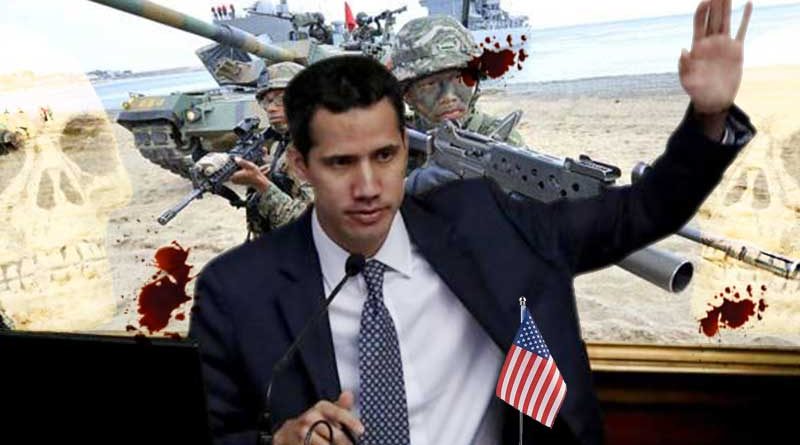 Surely, Juan Guaidó is not the only parliamentarian in the world (nor in Venezuelan history) that threatens the head of the Executive Power. Threats are part of the political game, especially when the opposition controls the legislative body, in any country where the system of counterweights between powers operates. But what is unusual – and it could even be said, against nature – is that the President of Parliament threatens the Government with a possible retaliation by a foreign power.

That is what is happening in Venezuela: the head of the National Assembly threatens the head of state with an intervention of the US Army . And he does not do it underground, but in public statements.

That attitude only demonstrates how dependent the opposition leadership is on the external factor and also to what extent the leaders have resolved to openly acknowledge that subordination. It can hardly be found in national history, after the War of Independence, such an unequivocal case of submission and obsequency by a national political class to the opinions of an imperial force. The elites who dominated Venezuela from 1830 until the end of the 20th century were – except for honorable exceptions – conservative and pro-imperialist positions, but they always managed to keep a certain minimal cover.

Guaidó, based on the argument that the Government is illegitimate and Maduro is a usurper, has no qualms about making public accusations in the name of the force that sustains him: that of the United States Government. His performance is typical of a proconsul of the Washington war clique.

The most recent demonstration of this was given by the deputy who declared himself president of the republic by declaring, relying on nothing less than the warmongering warnings of the head of the US Southern Command, Craig Faller, who has dedicated himself to showing the imperial muscles, teeth and claws, stating that the Marines are ready to “do whatever is necessary” in Venezuela.

Without a blush, Guaido said: “You have to understand that this is not a game, that there are consequences,” thus legitimizing a possible aggression of a foreign military force against the country.

The lawyer and constituent María Alejandra Díaz is not surprised at all that Guaidó has such an attitude. “Recall that he is a fundamental piece for the internal attack of institutions and the weakening of governance in Venezuela [said Diaz, in statements for Assumption]. He is a man who claims to be Venezuelan, but in his actions, we do not see that. The support for the interests of a hostile power and against those of his own country is the clearest “pitiyanqui”, a dragged and miserable stand.”

“What I regret is that he is still free because he should be paying for the crimes he has committed against the entire Venezuelan people and national sovereignty. I really regret it, but the decision in this regard is not mine,” said Diaz, a member of the constitutional commission that studies the issue of the possible call for parliamentary elections.

Compensating a joke
It is possible that this threat using the Marines, formulated in the tone of the child that says “my older brother is going to hit you”, was the result of a recommendation from his image advisers to mitigate the damage that Guaido himself inflicted when he made a joke about the presence of people named Marín (it sounds like Marine in Spanish) at a rally in La Guaira (saying that the “Marin” are here already). Although it seems another surreal detail, that remark about the legendary US Marines brought a swell of insults from the extreme wing of anti-Chavismo, which does want a US military intervention. He was even called “communist” for making fun of potential “liberators”.

The threat of Guaidó supported by a possible foreign military action against the country accentuated the concerns of those who wonder how far the deputy will be allowed to go in this type of action and declarations, which could well be typified as crimes against the country (treason). The strategy of not victimizing him has generally had support within the revolutionary sector, but with such openly anti-national attitudes, the outrage intensifies.

To understand the seriousness of the position of the deputy of the ultra-right-wing Popular Will party, just imagine what would happen to a representative or a US senator if he threatened Trump with a possible military aggression from Russia, China, Iran or North Korea.