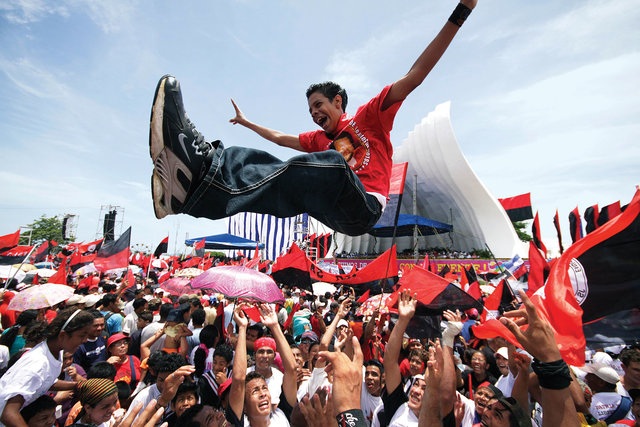 I think when many of us look at the world today we feel like we’re watching a science fiction movie: 22 million officially unemployed in the U.S. while analysts say the true figure may be double that, predictions of the worst economic crisis since the Great Depression of the 1930s, and lines up to 15-hours-long where they are giving away food or money with which to buy some.

In Ecuador, they give the families of people who die from COVID-19 cardboard coffins, while other victims’ bodies lie in the streets or people’s homes with no one to collect them. In Brazil, Colombia, and El Salvador the pots-and-pans protests and demonstrations continue, despite the curfew and militarization because they closed the borders while domestic food production was insufficient, which caused food shortages that raised prices. Hunger has come to the homes and stomachs of the poorest people.

The World Food Program estimates that in addition to the 820 million people already going hungry in the world, 135 million more will suffer acute food insecurity as a preliminary impact of the health crisis. The main victims are women, infants, and children (UN, 2020). This in turn has major repercussions on health, nutrition, and humanitarian aid, causing larger flows of forced migration, displacement, violence, and social conflict.

In Latin America and the Caribbean there are already 19 million more people suffering from hunger and 37.71 million unemployed. “Model” countries such as the United States and its lackeys in Latin America are now paying the price for shrinking the State, cruelly privatizing basic services (particularly public health), and abandoning peasant farmers. Meanwhile, the countries continuously demonized as the “Troika of Tyranny,” Venezuela, Cuba, and Nicaragua, are demonstrating their moral superiority and capacity to effectively manage the crisis based on the strengths they have built in the public sector and with more organized and socially conscious societies, disciplined to work for the common good.

This once again reveals the lies, shamelessness, and cynicism of the hegemonic media that are concealing the truth: imperialism in all forms is not only bad, but its worldview continuously fails.

How are we doing in our besieged, slandered, and sanctioned Nicaragua?

I grew up in a Nicaragua that always appeared in public discourse as an object of pity, its hand stretched out for charity in response to the hunger, extreme poverty, and pain our people were immersed in. This was even worse in times of international crisis, such as Hurricane Mitch. I remember it as if it were yesterday. In the public schools, we kids would get in line to receive a teaspoon of powdered milk wrapped in a sheet of notebook paper, and see some of our little classmates faint from hunger or simply be unable to pay attention or play outside. Our desk chairs were cement paving stones on which we had to make ourselves comfortable. And if you got sick, you were out of luck because there was no place to go. Not to mention the shoot-outs and nightly battles we heard between the “Come Muertos” and the “Galleros”—the two youth gangs in my neighborhood made up of ill-fed, barefoot boys.

Nowadays, Nicaragua is no longer on maps depicting the tragedy of extreme hunger or hopeless violence like its neighbors Honduras, Guatemala, and El Salvador. However, this fact is deliberately hidden by the corporate media.

Nicaragua is facing a fierce international smear campaign, with lie upon lie told in the world press, while a completely different situation is experienced within the country. In the context of COVID-19, families feel more economic pressure due to the indirect impacts on our open and capitalist economy, but they also acknowledge and feel normalcy, peace, and calm.

Many Latin American countries rushed to impose lockdowns with draconian, but inconsistent, measures: closing working class markets and small businesses, while international supermarket chains remain open in a display of unfair competition which causes tremendous losses for small producers, merchants, and distributors. In contrast, Nicaragua did not “cut and paste” such policies to handle the health situation. Rather, its approach has been wise, measured, tailored to our context and reality, and appropriate for the number of cases. The focus has been on protecting the peasant and popular economy and the lives of most of the Nicaragua people who live off of it. This is an example of [Peruvian philosopher] Mariátegui’s maxim: the revolution in Latin American should not be “a copy or imitation… it should be heroic creation.” To each unique problem, a unique solution.

These decisions are backed by tangible and intangible achievements over 14 years of significant progress in promoting human dignity. This is particularly true for health, with more hospital coverage, diversity and trained personnel. It is also true of education, security, production, and the building of roads in rural areas. And it is sustained by the confidence, tenacity, and sacrifice of thousands of Nicaraguan families that struggle on a daily basis to uphold the popular economy. It is sustained by the strength of the community health brigades in which the population merges with the government. And it is sustained by the hundreds of thousands of families of small and medium-sized farmers who are a bastion of production, producing around 85% of the food we Nicaraguans eat.

Today, thanks to our peasant families and the public policies of the Sandinista government, Nicaragua is no longer on the hunger map. Instead, we are well on the way to food sovereignty because our food production is local and it is distributed in small clusters—even more true if one considers the size of the country. For this reason, there is enough food in Nicaragua at this difficult time, and prices have remained stable or fallen slightly.

The country’s peasant culture, and its talent and infinite capacity to work every day, ensures that the words of President Daniel Ortega last month will remain true: “We will not die of hunger.” The first round of planting is about to start and farm families are lovingly preparing for it. They are getting their seeds ready, putting yokes on the ox teams, and just waiting for the first downpours, the aroma of damp earth, and a good moon to sow the sacred seeds of corn, rice, and beans that will ensure our resistance as a people once again.

World Food Program: COVID-19 will double the number of people facing food crises unless swift action is taken from