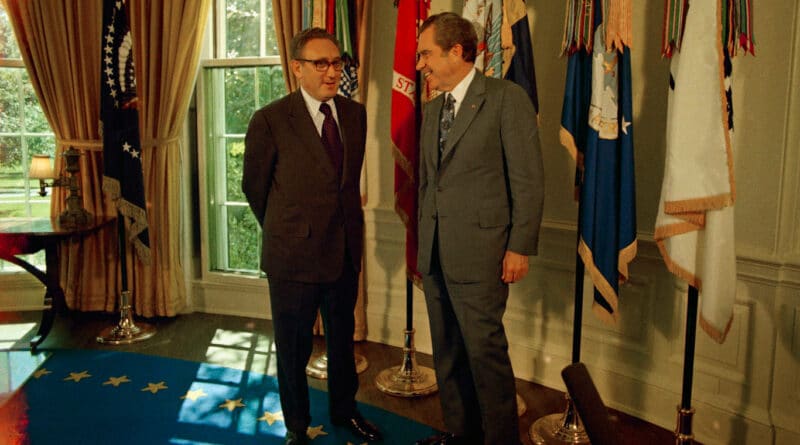 While there have been some worthy winners in its 119-year history, the Nobel Peace Prize has very often been handed to some of the world’s worst warmongers and war criminals.

Donald Trump has been nominated for the prestigious Nobel Peace Prize. The President of the United States was put forward by the far-right Norwegian member of parliament, Christian Tybring-Gjedde, who insists he is “not a big Trump supporter,” despite nominating him last year as well. Tybring-Gjedde’s stated reason for nominating Trump is for his work in the UAE-Israel deal signed last month, which normalizes relations between the two nations.

While there have been a number of people and organizations already nominated for the award, Trump is immediately considered among the favorites to win, his odds drastically shortening with bookmakers today.

The announcement was predictably applauded by supporters of the president, who voiced their approval online. Meanwhile, His detractors were unsurprisingly shocked and dismayed by the news. “Trump being nominated for the Nobel Peace Prize by far-right anti-immigration nut job Christian Tybring-Gjedde is like getting a letter of recommendation to be a firefighter by a pyromaniac,” wrote Dr. Eugene Gu, one of the president’s most vocal online opponents.

The prize is often considered among the most esteemed awards any individual can win; a recognition of a supreme commitment to someone who has given “the greatest benefit to humankind,” in the organization’s own words. But while there have been some worthy winners in its 119-year history, the prize (and its ~$1 million cash reward) has very often been handed to some of the world’s most reprehensible individuals, including the following examples.

Burmese politician Aung San Suu Kyi received the award in 1991 “for her non-violent struggle for democracy and human rights.” For much of the time between 1989 and 2010, she was kept under house arrest by the ruling military junta. Time magazine labeled her a “child of Gandhi” for her supposed commitment to pacifism. Yet since her ascension to the office of state counselor (the Burmese version of prime minister), she has overseen the Burmese army’s genocide of Rohingya Muslims in her own country, defending and supporting the same military who used to keep her locked up. In 2017 she insisted that even ethnic cleansing was “too strong a word” to describe events, claiming that “it is Muslims killing Muslims,” but denying visas to United Nations officials who wished to investigate the atrocities. The violence is known to have killed at least 24,000 people and forced more than 730,000 Muslims to flee to neighboring Bangladesh.

A host of Israeli leaders, including Menachem Begin, Yitzhak Rabin and Shimon Peres, have also won the prize for their supposed efforts in bringing peace to the Middle East, even though Israel has militarily occupied much of Palestine and parts of Syria for decades, continually breaking ceasefires to attack its neighbors. In 1996, for instance, Peres ordered Operation Grapes of Wrath, the most notorious chapter of which was the Qana massacre, where 106 Lebanese civilians were killed. Peres appeared proud of his actions; “Everything was done according to clear logic and in a responsible way,” he said. Meanwhile, in 1967, troops under Rabin’s command are thought to have killed around 1,000 Egyptian prisoners of war en masse.

Barack Obama was surprisingly given the award in 2009, after only a few months in office, the Nobel Institute claiming that he was helping rid the planet of nuclear weapons, bringing peace to the world, and to tackle climate change, all of which in 2020 appear rather questionable claims. Much of the Institute’s justification for the award is in the future tense. “Democracy and human rights are to be strengthened,” they wrote, suggesting the prize-givers were awarding him for his promises rather than his actions. In reality, Obama expanded the American war machine, bombing seven countries simultaneously, earning the moniker the “Drone King.” According to U.S. government documents, nearly 90 percent of those he killed were civilians. Other estimates put that number much higher.

Perhaps the most egregious Nobel Peace Prize winner of all time was American war planner Henry Kissinger. Kissinger was one of the chief architects of the U.S. attack on Southeast Asia in the 1960s and 1970s, actively sabotaging President Johnson’s peace talks with the Viet Minh resistance. He also delivered the infamous orders for the massive bombing of Cambodia; “Anything that flies on anything that moves,” he instructed. He also supported Indonesia’s genocide in East Timor and the Pakistani crackdown against Bangladesh’s independence movement. Kissinger was the mastermind behind the attacks on Salvador Allende’s Chile, attempting to “make the economy scream,” also supporting and abetting the fascist coup that resulted in the end of democracy in the South American nation.

While Kissinger gratefully accepted his prize, his co-recipient, Vietnamese negotiator Le Duc Tho, is the only individual to reject the prize, doing so on the grounds that peace had not been achieved. “Once the Paris accord on Vietnam is respected, the arms are silenced and a real peace is established in South Vietnam, I will be able to consider accepting this prize,” he said. The U.S. would not stop bombing for another two years.

While there has been a great deal of consternation at the idea of Trump receiving the prize, the reality is that it has already drifted so far from Alfred Nobel’s original intention of awarding it to individuals who spend their lives “challenging militarism” that it as often as not awarded to infamous warmongers. Trump would merely be joining a select rogue’s gallery if he were to win.

Feature image: Secretary of State Henry Kissinger being congratulated October 16, 1973 by President Richard Nixon in the Oval office of the White House, following the announcement that Kissinger was a winner of the 1973 Nobel Peace Prize. Photo | AP