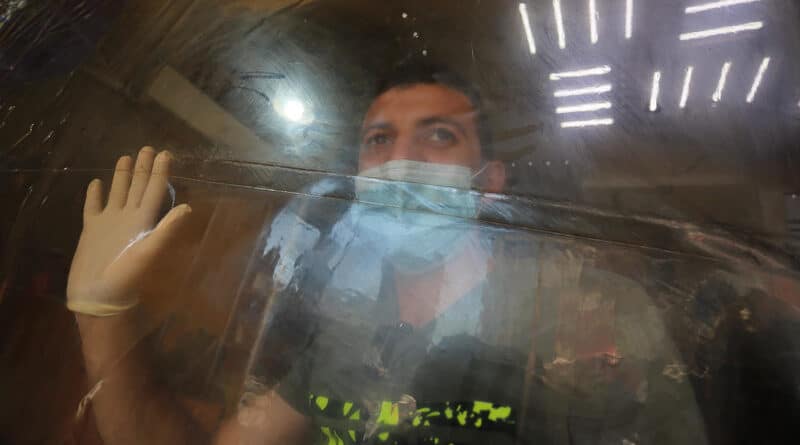 After The Electronic Intifada reported on the removal of the Gaza health ministry’s page, Facebook restored it.

“Thank you for bringing this issue to my attention,” Levine tweeted in response to the writer of this article.

“We were able to immediately restore the page, which was taken down in error. We apologize for any inconvenience caused.”

Levine also gave an assurance that safeguards had been put in place to ensure it would not happen again.

Thank you for bringing this issue to my attention. We were able to immediately restore the page, which was taken down in error. We apologize for any inconvenience caused. https://t.co/mLlOQGxb1x

I hope safeguards will be put in place to ensure this never happens again!

When I heard the news on Monday that the first coronavirus cases had been confirmed in Gaza outside of quarantine centers, I headed immediately for the Facebook page of Gaza’s health ministry.

It’s the place I go for information or livestreams of press conferences from health officials serving the 2.1 million Palestinians in Gaza, half of whom are children.

This was the moment everyone dreaded and had managed to stave off since the start of the pandemic: a potentially uncontained outbreak in a besieged enclave whose health and sanitation systems have been on their knees for years due to successive Israeli military attacks and 14 years of illegal blockade.

To my dismay, however, the Facebook page was gone.

Dr. Ashraf al-Qedra, the health ministry’s spokesperson, confirmed to The Electronic Intifada that Facebook shut the page down about 10 days ago. This is the third time Facebook has shut down the ministry’s page.

Al-Qedra said the pretext Facebook gave was that the ministry had used the words “martyr” or “resistance.”

The word shahid in Arabic – often translated as “martyr” – is used almost universally by Palestinians to describe any person, whether a civilian or a combatant, killed in the context of the conflict with Israel.

I have written to Facebook’s media office twice this week asking for an explanation. I have yet to receive any reply.

For years, Facebook has been waging a campaign in cahoots with Israeli occupation authorities to silence and censor Palestinian media.

It has shut down the accounts and pages of dozens of Palestinian journalists and publications – on the Israeli-supplied pretext that criticism of Israel and its crimes against Palestinians constitute “incitement.”

It has labeled Palestinian journalism as “hate speech.”

Facebook has even appointed an Israeli government censor to its “oversight board.”

Given Facebook’s silence, it is only fair to conclude that the shutting down of the health ministry’s page is part of this censorship campaign.

But what “incitement” could the health ministry possibly have engaged in?

Every person and journalist who has visited its page knows that the health ministry uses Facebook to supply information – whether about people killed or injured in Israeli attacks, or about the enormous efforts to hold back the spread of COVID-19.

“The Facebook page is very important for our work, to keep a connection with people and to post information and guidance,” al-Qedra said.

“Facebook has become a basic information source all around the world, and in Gaza it’s the most used outlet.”

It is cruel and unconscionable for Facebook to deprive Palestinians of information at any time, but during a pandemic it is positively sadistic.

It is also hypocritical: When Facebook claims it is working to “stop misinformation and false news,” how can it possibly help by shutting down vital sources of health information for vulnerable people?

Faced with this outrageous censorship, the health ministry in Gaza is working to launch a new page, according to al-Qedra.

But every time Facebook shuts down an organization’s page, it loses all its followers and must start from scratch building up its audience again.

The ministry also still has a Facebook page created in March specifically to focus on COVID-19.

That page on Wednesday announced the first death of a Palestinian with the virus outside of quarantine in Gaza.

The ministry stated that 61-year-old Rabah Labad was seriously ill and on a ventilator when he passed away.

Things are difficult enough for Palestinians in Gaza. Facebook must stop contributing to their misery by censoring vital health information.

Since initial publication this article has been updated with comments from the health ministry spokesperson.

Featured image: A worker in Khan Younis during a lockdown imposed following the discovery of the first coronavirus cases in the Gaza Strip outside of quarantine centers, 25 August. Ashraf AmraAPA images