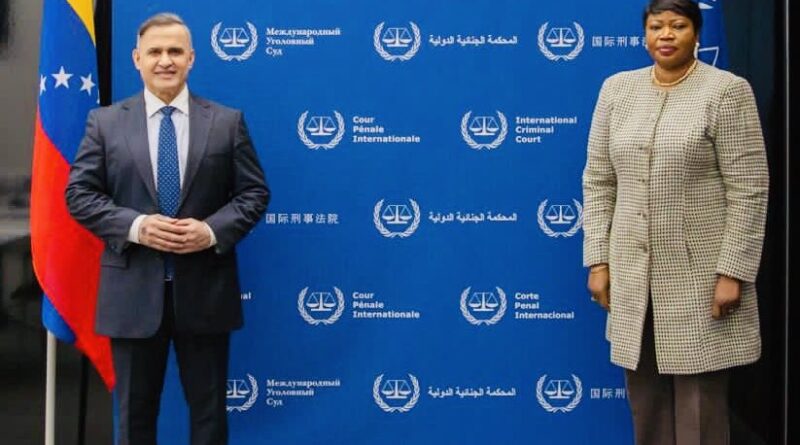 Venezuelan Attorney General, Tarek William Saab, reported this Thursday that he traveled to the International Criminal Court (ICC) in The Hague, Netherlands, to address Venezuela’s situation regarding human rights and US sanctions, joined by the Venezuelan Ombudsman, Alfredo Ruíz.

Through his Twitter account, Saab reported that Venezuela is proceeding in a constructive collaboration with the Prosecutor’s Office of the ICC, contributing information on the “conduct of the Venezuelan justice system and the powers of the Public Ministry.”

He specified that this collaboration is due to the fact that the ICC is in the preliminary phases of a report which will determine whether there have been cases that fall within its jurisdiction in Venezuela, and regarding sanctions surrounding these cases. This report is known as “Venezuela I.”

The ICC issued a press release about the working meeting highlighting the encounter between Attorney General Saab and the Chief ICC Attorney Fatou Bensouda, who was recently sanctioned by the United States due an investigation carried out by the ICC on war crimes committed by the US Army in Afghanistan.

With respect to the situation of Venezuela I, the Prosecutor conveyed to the delegation that the Office had concluded its subject-matter assessment and determined that there was a reasonable basis to believe that crimes within the jurisdiction of the Court have occurred in Venezuela. In this regard, the Office sought information on relevant domestic proceedings and their conformity with Rome Statute requirements.

The attorney general took the opportunity to recall that Venezuela reaffirms its sovereign power to sanction, based on its Constitution, crimes against human rights, and those actions will be reflected in the report that they will present before the ICC.

He added that the progress on the complaint filed by Venezuela on the unilateral coercive measures applied by the US government against the Venezuelan State (known as Venezuela II) was shared between both prosecutors, on February 13 in The Hague. It was also discussed in this new meeting, according to the ICC press release.

Finally, he explained that from those encounters both officials provided details of the progress of the Venezuelan justice system to punish human rights violations. “In our presentation we pointed out the commitment of the Venezuelan State and its institutions to investigate, prosecute, accuse and convict those responsible for said human rights violations,” he stressed.

Meanwhile the Venezuelan extreme right opposition exploded with criticism for this meeting that is “standard procedure” in International Criminal Court operations.  Political operators from the G4 coalition (AD, PJ, VP and UNT), all under the US payroll, like Julio Borges and Delsa Solorzano, made public comments on the meeting, repeating the US script of alleged “crimes against humanity”  committed by Venezuelan authorities.

Featured image: Courtesy of the ICC.