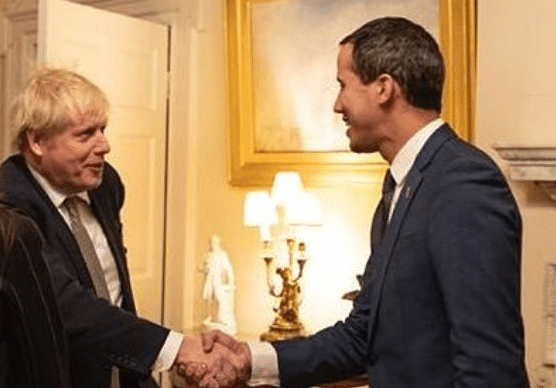 A new scandal surrounding the Juan Guaidó farce was unveiled by the British media, which revealed that the administration of Boris Johnson, subordinated to Queen Elizabeth II, gave Juan Guaidó nearly $600,000 to create an “anti-government coalition in Venezuela.”

The information, published by British media outlet Daily Maverick, details that a total of £450,000 ($591,000 USD) have been transferred to a Non-Governmental Organization (NGO) called “Transparencia Venezuela” that would be directed by “independent journalist” Pedro Pablo Peñaloza.

According to Daily Maverick, the information was revealed by “Declassified UK”—a website dedicated to investigative journalism —which was able to verify that “the UK government has given £450,000 to Transparencia Venezuela, a local branch of the international NGO Transparency International, to form a coalition headed by a willing opposition operator to the government of Nicolás Maduro .

The aforementioned investigation adds that “the UK Foreign Office stated that it awarded £250,000 in 2019 to establish the Anti-Corruption Coalition, which it describes as an anti-corruption coalition of civil society and free media actors, to help them fight corruption and organized crime in Venezuela.”

In addition, it says: “the Ministry of Foreign Affairs disbursed another £200,000 to Transparencia Venezuela for the period from March to December 2020 to strengthen the sustainability of the coalition.”

The investigative report adds that it they found “that the coalition is run by – and partners with – some of the country’s most outspoken individuals and groups opposed to Maduro’s leftist government.”

“The governments of the United Kingdom and the United States recognize the opposition figure Juan Guaidó as the ‘interim president’ of Venezuela and have openly sought to remove Maduro from office,” states the British media without mentioning that all destabilization attempts have failed, due to the will of Chavista Venezuelans and their support of Maduro’s administration.

Who finances the anti-government coalition?

It was also found that the coalition, “whose only external funder seems to be the British government, already includes 781 organizations and promotes 243 initiatives.”

Meanwhile, Transparencia Venezuela—for its part—qualifies the new group as a “citizen movement” that hopes to achieve a “real transformation” and a “new Venezuela.”

Transparencia Venezuela confirmed to Declassified UK that they are required to submit “progress and project management reports every three months” to the UK embassy in the Venezuelan capital, Caracas.

The report explains that the funds for these seditious purposes were granted by the Conflict, Stability and Security Fund (CSSF) which owns 1.26 billion pounds sterling and that, according to the government, “works to build peace and stability in countries at risk of instability.”

Meanwhile, the UK government declined to comment after several requests from Declassified UK to specify who it finances in Venezuela.

“In response to two recent Freedom of Information requests, the UK Department for International Development (DFID) said it was ‘withholding details of the organizations we support within Venezuela’ for health and safety reasons. It is not clear what relevance health and safety has to freedom of information applications,” the report added.

Peru, Panama and Colombia used as a facade

According to the UK website’s report, the government of the United Kingdom has not openly published its funding for the coalition against the Government of Venezuela; but this has been added to an existing CSSF program entitled “Serious Organized Crime Peru/Colombia.”

“A summary of the program for this project, dated March 2020, is the only government public reference to the Venezuelan coalition that Declassified could find. It claims that £0.3 million in aid funds were allocated in 2019-20 for a ‘Venezuela anti-corruption project’, the investigation explains.

In addition, the document adds that “the program is also for the first time funding activity in both Panama and Venezuela” and that the CSSF anticipates “increased activity” in both countries with the Venezuelan project “focusing on civil society’s resilience to corrupt State practices.”

The funding raises questions about the UK government’s commitment to transparency, as the project does not appear to be mentioned on the government’s ‘DevTracker’ website, which is meant to list all of the UK’s international aid projects.

A Transparency Venezuela spokesperson told Declassified UK that the group “focuses on transparency and the fight against corruption, and for this reason it monitors the resources that are managed or are under the responsibility of the current State organs”.

“This report is very important for Venezuela because it unveils the alleged ‘independent NGOs’ mafias and corruption schemes with the UK government, but it works in the same way with the US and other Nordic countries. It shows a patronage relationship between this NGOs and the UK government, and it’s also evidence of their connection with anti-Chavista political parties in Venezuela,” an international expert told Orinoco Tribune.

“This is a symbiotic relationship between foreign imperialistic governments, local and international right wing NGOs, and political operators within Venezuela, aiming at overthrowing the legitimate government of Nicolas Maduro. It is not a ‘transparency’ operation, it is actually a dark money laundering operation that we know is common practice in the UK and the US. And it is more evidence proving that right-wing political parties and NGOs in Venezuela will never try to find a solution to the current problems affecting Venezuela because they enrich themselves with foreign money by maintaining the status quo,” the expert added.