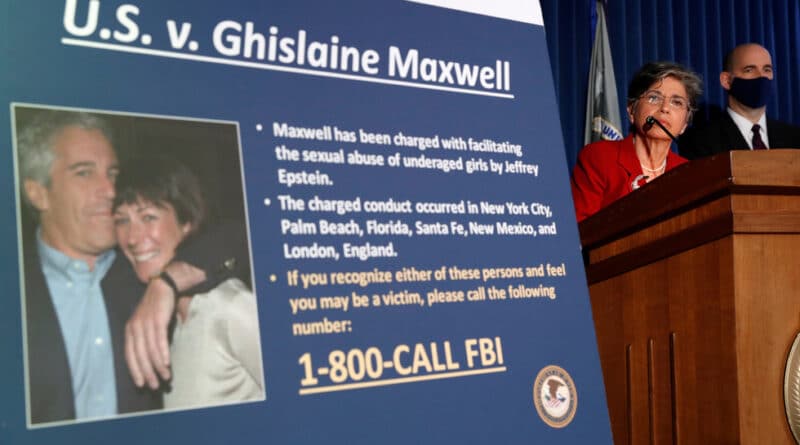 October 22, 2020.-  A document containing the testimony of Jeffrey Epstein’s alleged madame, Ghislaine Maxwell, has been made public. The transcript contains lurid details of Maxwell’s sex life, and prosecutors say it shows evidence of perjury.

The deposition was ordered to be released by senior US District Judge Loretta Preska on Monday, and went public on Thursday morning. The interviews with the 58-year-old socialite were conducted in 2016 as part of a since-settled libel case against Maxwell by Epstein accuser Virginia Roberts Giuffre, who has also accused Maxwell of abusing her.

During the interviews, Maxwell told prosecutors that she invited Giuffre to Epstein’s house to work as a masseuse, while Giuffre was underage. Maxwell also said that she had “no idea” whether another unnamed girl was 13-years-old when she met her.

We have Ghislaine Maxwell's unsealed deposition.

Question: Did you invite minor Virginia Giuffre to Epstein's home?

Maxwell: "She came as a masseuse."

Giuffre and a number of other girls have accused Maxwell of recruiting them to massage Epstein, an arrangement that would progress into sexual acts. When asked whether these underage masseuses would “perform sexual acts for Jeffrey Epstein,” Maxwell told the prosecutor “I don’t know what you mean by sexual acts,” and later called Giuffre’s accusations “lies.”

Maxwell: "I don't know what you mean by sexual acts." pic.twitter.com/LsLIDDJ4DW

Maxwell refused to say whether she participated in any of Epstein’s massage sessions, and kept quiet as prosecutors grilled her on the deceased pedophile’s sexual interests. “I cannot tell you what Jeffrey’s story is,” she said when asked whether “Jeffrey Epstein had a sexual preference for minors.”

Throughout the mammoth 450-page interview, Maxwell remained guarded and evasive. Asked whether she was ever aware of any underage girls visiting Epstein’s Palm Beach home, she said that “the house is actually quite large,” so she would have been unaware of every visitor who came to see Jeffrey.

Maxwell did not deny taking Giuffre to London when Giuffre was 17-years-old. During this trip, Giuffre alleges that she had sex with Prince Andrew in Maxwell’s home. Andrew’s name is redacted from the transcript, but unredacted details – like travel dates and a puppet allegedly gifted to the British royal by Epstein – make it easy to see where Andrew is mentioned.

Maxwell said that she “cannot recall” Giuffre and Andrew having sex during that trip, but confirmed that the Duke of York visited Epstein on the pedophile’s private island at least once.

The document will take some time to comb for incriminating information, but Maxwell at certain points seems desperate to cover her tracks. Asked whether she flew on Epstein’s plane with Giuffre, who was underage, Maxwell said she had no way of knowing the girl’s age. When presented with the flight logs, which showed “JE, GM, and Virginia,” Maxwell replied “How do you know the GM is me?”

Tons of hedging in this deposition. "I don't recall", etc.

Maxwell: "I didn't even know she was on the trip." pic.twitter.com/6KccXaxxrk

The perjury charge against Maxwell stems from her insistence in the interview that she knew nothing about Epstein’s “scheme to recruit underage girls for sexual massages,” despite prosecutors stating in the interview that her name was on massage appointments she made with a 15-year-old girl.

Prior to its release, Maxwell fought to keep the deposition sealed. Her lawyers argued that it revealed intimate details about her personal life, and could interfere with her upcoming trial for sex trafficking offenses.

The daughter of media mogul and alleged Israeli spy Robert Maxwell faces six charges related to both sex trafficking and perjury, and was arrested in July in New Hampshire. She remains held in a Brooklyn jail, having been denied bail as an “extreme flight risk,” holding passports from multiple countries. Her trial is due to begin in July, and Maxwell faces up to 35 years in prison if convicted.

Jeffrey Epstein died in a Manhattan jail last August, with his death ruled a suicide.

Featured image: FILE PHOTO: Charges against Ghislaine Maxwell for her role in the sexual exploitation and abuse of minor girls by Jeffrey Epstein are announced in New York City, July 2, 2020 © Reuters / Lucas Jackson