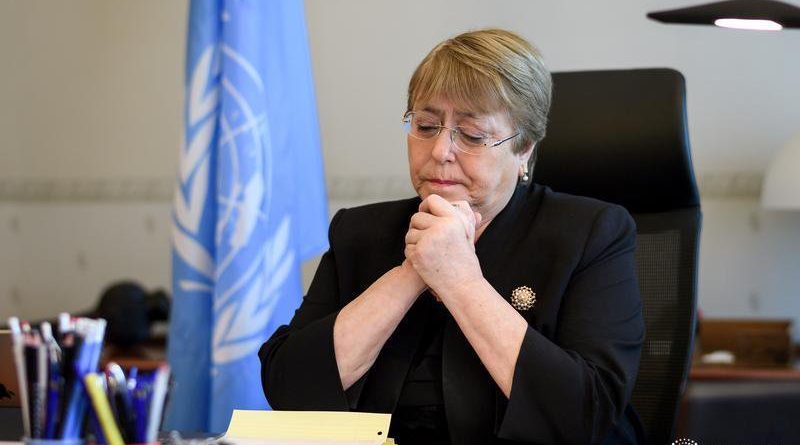 Does Bachelet’s report represent the last of many attempts of international “coup d’état” in Venezuela?

Let’s not make a mistake. The report delivered on July 4 was and it’s thought to give full justification to the strategy of a two-party régime change like in the United States in Venezuela. It must be very convenient for the Democratic Party, the supposedly “progressive” wing of the North American political system that the report uses the speech of “human rights” and comes from an international institution, necessary condition to give its support to the politics of Trump.

Contrary to the previous international reasons, this is the first one to come from an official international organization, and not just any organization, but the UN. On July 6th, only two days after the publication of the report, Iván Duke, President of Colombia, took it as green light to continue the politics of Trump:

“I hope that now with this result of Michelle Bachelet’s report, the Court (International Penal Court – IPC) can quickly, not just open the investigation, but acquire overwhelming evidence so that a trial is moved earlier and a dictator receives what he deserves for oppressing the Venezuelan people”.

The battle grows up again! Latin America has been the stage of a large variety of strategies for régime change, including the parliamentary coups in Paraguay and Brazil, against Lugo and Dilma, as well as the law suit against Lula and his imprisonment under false accusations. The Cuban Revolution, resilient as always has been the target of régime change since 1959 mostly on the base of accusations of human rights violations, generously financed through “promotion-of-democracy programs.”

Venezuela has been recently the target of three open coup d’état attempts, several sabotages to the electric network – a continuous economic and political war aimed at facilitating the coup d’états, accompanied by a propagandistic bombing on behalf of the international media corporations against President Maduro. Like sharks sensing blood in the water, Duke jumped immediately on this personal objective.

Does Bachelet’s report represent the last of many attempts of international “coup d’état” in Venezuela? Was this the first salvo of a new attempt, with the pretext of defending “human rights”? I believe so.

However, and luckily for Venezuela and the international left-wing, it’s possible we never know with certainty. The Bolivarian Revolution also saw the threat the same day that Bachelet made public her report. The reaction was swift and radical, a characteristic of Maduro’s government since the first of the recent coup d’état attempts, on January 23rd, 2019. Once again, the answer is an international politics of peace and negotiation combined with a vigorous defense of the Venezuelan sovereignty. Venezuela speaks clear, not feeling for a second intimidated by the aura of the “United Nations”.

The Bolivarian Revolution didn’t see any green light, but the characteristic red color of Chavismo. On July 4th, the same day the infamous report was published, Maduro’s government refuted it in 70 points. On July 11th, the president also wrote a formal letter to Bachelet detailing the false accusations and deliberate omissions, asking her respectfully to rectify the report based on the facts.

This letter was accompanied by other declarations and reactions of Venezuelan personalities, and simultaneously the government summoned the people to express their opinions on July 13th.

People didn’t need summoning. Ironically, the most important secondary effect in the current war directed by the United States against Venezuela has been, and still is, the peak of political awareness that Chavismo represents. It’s in fact this ideology, this political movement that the United States is trying to destroy. With this goal in mind, the U.S. is bent on getting the domestic oil, but also the elimination of the beacon that represents the Bolivarian Revolution Bolivarian, together with Cuba, in the international sphere, as examples of an alternative social system and type of government that withstands the United States.

On July 13, Venezuelans went out on the streets, not only in Caracas but in many domestic states. There aren’t official figures regarding the participation, but videos and pictures reveal that dozens of thousands of people attended, despite the heavy rains.

Judging by the improvised signs, and contrary to what most academics from the dominant trend think, many UN “human rights” officials, and practically all the media, the Venezuelan people has a very clear vision of the controversial matter of the human rights.

How can that be? Because popular classes, formerly “invisible”, are at present impregnated of their own experience and collective memory, passed from generation to generation; they are deeply aware of the true meaning of human rights and they make it visible for the world to see – or ignore it deliberately.

In their declaration during the rally of July 13th in Caracas, Diosdado Cabello declared that Bachelet:

“She governed eight years in Chile with the Constitution of a genocide, of a true dictator”, in reference to the inherited Magna Carta of the civic-military dictatorship of Augusto Pinochet. What did she do in those eight years? She did absolutely nothing to change the Constitution. She used that Constitution to repress the Mapuche people, to persecute students in that country. Yes, that same lady who came here to speak about human rights in Venezuela.”

And what finally happened with this “coup d’état” attempt based on “human rights”? Was it interrupted even before it begun? It seems likely, for the time being.

Popular classes and their dedicated leaders are not in no way constrained by the concept of human rights based on the North American unique king of thinking. The perspective and ideology are decisive. In fact, it’s a matter of life or death. Once corrupted by the dominant conception of human rights, in a crucial moment, either deliberately or by the force of circumstances and the career objectives, it explodes.

See the Bachelet: In the moment the United States need the most to resuscitate its failed politics, she jumps to the throat. The other lesson that needs to be learnt of this “Third Way” of academic and politicians is that, sooner or later, we see that the “alternative” is not an alternative to the status quo, but a cruel and cynic alternative to the left-wing.

But the Venezuelan people has the last word.