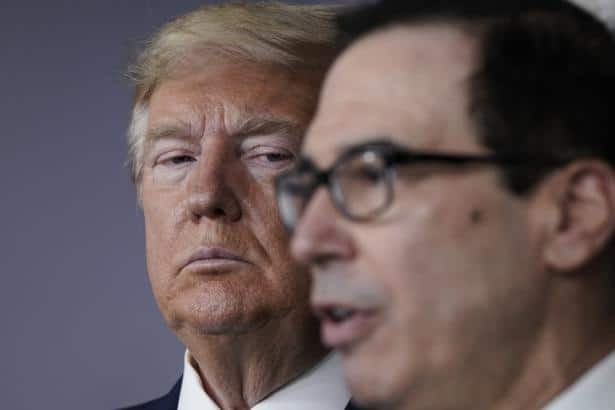 Let the lieutenant governor of Texas, raring to sacrifice himself on the altar of the free market, become a grocery store worker. Let the CNBC pundits become retail cashiers.

“We must reopen the economy,” you say. “It is vital that we send people back to work,” you say. Well, it sounds important. By all means—you first.

The cure must not be worse than the problem, the president says. It is important that we not disincentive work, right-wing economists say. Keeping things closed could devastate the economy, business leaders say. These things are a tradeoff, you see. Yes, some people will die if we put everyone back to work sooner than the health experts say. But these things are inevitable. And the economic damage could be awful if we don’t.

Okay. All of you line up, to report to work.

Lloyd Blankfein, the reasonable cheerleader for restarting commerce, you can be a doorman, throwing open the doors of your Manhattan office building for all the bankers to return to their desks. The doorman, who prefers not to die, can be the CEO of Goldman Sachs. That office is sufficiently large for social distancing, I’m sure.

Art Laffer, the discredited economist, can be a waiter in a crowded restaurant. A waiter, who prefers not to die, can become an economist. No waiter could be a worse economist than Art Laffer, anyhow.

Let the lieutenant governor of Texas, raring to sacrifice himself on the altar of the free market, become a grocery store worker. Let the CNBC pundits become retail cashiers. Let the Washington corporate lobbyists beating the drum for restarting production become warehouse workers. And let the regular people who work in crowded restaurants and crowded stores and crowded warehouses and crowded factories take jobs in statehouses, and on cable TV, and at think tanks. It is only fair that the bold leaders urging us all to be brave enough to disregard scientifically sound warnings of millions of deaths in order to prop back up American business be the first ones out there, in close proximity to the infectious public, getting coughed on as they enable each and every one of the transactions that will get money flowing again. That is what leadership is all about.

Besides, there will certainly be a number of job openings in politics and cable TV punditry and think tanks once all of those free marketeers go out into the workforce and promptly catch coronavirus.

There is an unspoken and underlying assumption in all of the push to end our national shutdown before the pandemic has passed, which is: Rich people will not be the victims of this. This belief is untrue, but the rich can be forgiven for believing it—in normal circumstances, it is a very reliable rule. The rich have been sending poor people to their deaths in wars for the sake of profits for centuries. Nothing new at all about that. In violent conflicts, non-rich people are just grease in the wheels of the capitalist machine. It is not remarkable that business leaders and their allies would want to enact the same pattern of human sacrifice now, with the stock market plummeting. The difference is that the pandemic will kill the rich, too. They are currently acting as if they can buy their own safety, because they haven’t seen their peers die too much yet. But they will.

The voices pushing to send millions of people back to work at the cost of what could be millions of lives will say that they are being hardheaded realists. They will say that the cost of our ongoing economic shutdown, with its attendant unemployment and bankruptcies, will be even worse. But the only world in which that could possibly be true is a world in which we preserve our old, suddenly absurd economic arrangements at all costs. It is only true in a world in which we refuse to consider debt forgiveness, and a massive government wage subsidy, and health care for all. It is only true if you accept the premise that, during this economic shutdown, all small businesses will go bankrupt and workers will lose their jobs permanently and we’ll all become buried in debt.

If you instead assume a world in which we recognize the obvious reality that, as a result of this unprecedented public health crisis, we must waive many debts and let government spending carry us past the dangerous period, then keeping people at home in order to save a million or two million lives is the only choice. But recognizing the necessity of what must be done means that, on the other end of this, the capitalists must take a loss. They will not take all of the loss, or even a permanent loss, but they will take a loss, because economic activity will almost cease for a period of time.

That loss—of a year or two’s profits—is what is considered unacceptable. So, of course, we must all get back to work while the pandemic is still raging. And if a couple million people must die in order to ensure that we do not forgive any loans in this country, then that is just how it is going to be. It’s just plain common sense. Okay? Fine.

You first, fuckers. See you in hell.

Featured image: U.S. President Donald Trump looks on as Treasury Secretary Steven Mnuchin speaks during a briefing about the coronavirus outbreak in the press briefing room at the White House on March 17, 2020 in Washington, DC., Drew Angerer/Getty Images