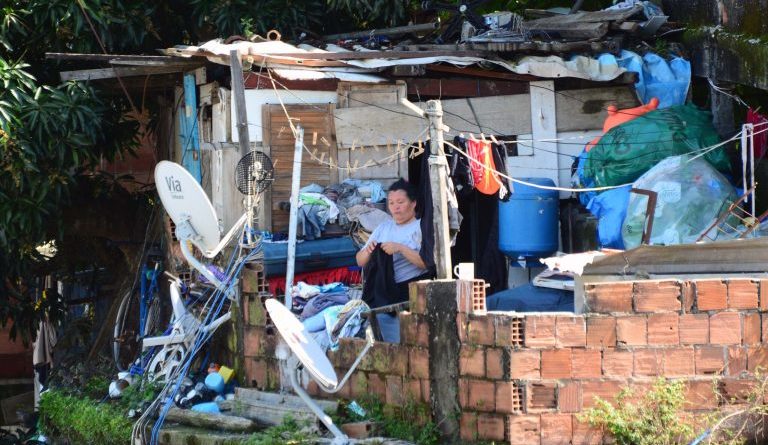 March 23, 2020 (Sputnik).- Brazil’s favelas, informal self-built slums, are one of the most vulnerable areas to the arrival of the new coronavirus and their inhabitants are beginning to organize themselves and demand urgent prevention measures from the public authorities, as explained by Nega Gizza, the spokesperson for the Central Unica das Favelas (CUFA) in the state of Rio de Janeiro.

“Slum dwellers are at immense risk if they are affected by the pandemic; the tendency is that virus spreads very quickly in the slums… If it enters here we are going to lose a lot of people very quickly,” Gizza, a resident of the Fazenda Botafogo complex on Rio’s northern periphery, told Sputnik.

In the last few days, activists and community leaders like Gizza remembered through social networks that the measures that health authorities constantly repeat to prevent the spread of the virus like washing hands with soap and water, isolating themselves at home as much as possible, etc. are often almost impossible to apply in the favela.

In many cases, access to drinking water is constantly interrupted and sanitation conditions are minimal, with narrow alleys where hardly any sunlight enters, small houses with poor ventilation where many people usually live together, and a totally deficient medical and hospital service.

In addition, Gizza stresses that for the humbler population, who have informal jobs selling on the street, for example, confinement is equivalent to starvation.

“A street vendor can’t work on the street anymore because the street is empty, and because you have to be at home, so people are already running out of money to eat. We are starting to see people enduring hunger,” she said.

In many homes, the situation is aggravated by the fact that classes in public schools have been cancelled for days due to the coronavirus. For many children, lunch at the soup kitchens is the only consistent food they receive throughout the day, and now that means an extra expense for the families.

In Brazil, about 15 million people live in favelas; in the city of Rio de Janeiro, where there are more than 700 communities of this type, they represent 20% of the population, and on March 22 the first case of coronavirus was detected in one of these neighborhoods, in Cidade de Deus.

Preventing the coronavirus from spreading here is crucial not only for the good of its inhabitants, but also because the favelas are not isolated, they are spread throughout the city and their inhabitants normally coexist with the rest of the population that resides in formal neighborhoods.

For all these reasons, and in the absence of a specific prevention plan from the government, CUFA, a national organization created 20 years ago, published in recent days an open letter with a list of measures that should be implemented as soon as possible.

These include the free distribution of water and hand sanitizing gel, protecting the elderly and other at-risk populations by moving them to hotels and other tourist establishments that are now empty, and support for micro and small businesses, as well as a moratorium on electricity and gas payments for families earning less than four minimum wages.

Gizza said that a “minimum income” for people in a more extreme situation is also basic, and she appreciated the fact that many companies and non-governmental entities are already making themselves available for donations of food and cleaning products.

Last weekend, CUFA and other entities mobilized vehicles in several favelas in Rio de Janeiro with loudspeakers reminding them of prevention and hygiene tips, and even launched a “funk” (the most genuine musical genre of Rio’s favelas) with rhymes asking everyone to stay home.

In the Paraisopolis favela, one of the largest in Sao Paulo, 400 volunteers were called to monitor suspected and confirmed cases of coronavirus (each will have to keep an eye on 50 houses and their respective inhabitants), and the idea wants to be replicated in other favelas in the country.

For the moment, the central government has not presented any specific plan for these neighborhoods; the Rio City Council has announced that it will distribute 20,000 baskets of basic foodstuffs and place water containers at the entrances of the favelas.

According to the latest report by the Brazilian Ministry of Health, released on March 22, the country has 1,546 confirmed cases of SARS-Cov-2 and 25 deaths have been recorded so far.

Health authorities warned that the numbers will grow exponentially in the coming days and that in April the country’s hospital system could collapse.