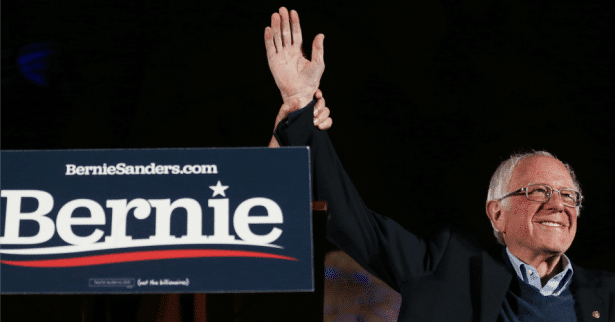 Sen. Bernie Sanders scored a decisive victory in the Nevada Democratic presidential caucus on Saturday, a win powered by a remarkably strong grassroots operation across the state and support from a diverse coalition of voters.

“In a diverse electorate that looks the most like Super Tuesday states, Democrats chose Bernie Sanders as their candidate to defeat Donald Trump.”
—Alexandra Rojas, Justice Democrats

Fox News was the first network to call the race for Sanders, followed by NBC, which declared Sanders the winner Saturday evening as he held a more than 25 percentage point lead over former Vice President Joe Biden with just over 4% of precincts officially reporting.

“We have just put together a multi-generational, multi-racial coalition which is gonna not only win Nevada, it’s gonna to sweep this country,” Sanders said at a rally in San Antonio, Texas following his caucus victory.

“No campaign has a grassroots movement like we do,” Sanders added, “which is another reason why we’re gonna win this election.”

Sanders wiped out the rest of the Democratic field among Latinos and young voters, according to entrance polling, and also won among middle-aged voters, voters with and without college degrees, men and women, voters from union and non-union households, and self-identified liberals and moderates.

The diversity of Nevada, said MSNBC’s Steve Kornacki, proved “to be Sanders’ strength.”

“What do you call it when you’re strong in every demographic group including age, race, and class? I think that’s called electability,” tweeted Sanders national press secretary Briahna Joy Gray.

The Washington Post provided a graphic showing the groups candidates led by 6 or more percentage points in entrance polls: “The naysayers in Washington have doubted his candidacy for over a year,” Alexandra Rojas, executive director of Justice Democrats, said in a statement. “In a diverse electorate that looks the most like Super Tuesday states, Democrats chose Bernie Sanders as their candidate to defeat Donald Trump. It’s clear that the Democratic voters with the most energy behind them look and think a lot more like AOC than Joe Biden.”

Jennifer Medina of the New York Times reported that the leadership of Nevada’s powerful Culinary Workers Union “urged members to vote for anyone other than Sanders because of his ‘Medicare for All’ plan, including in texts this morning.”

“Many rank-and-file members of the Culinary Union voted for Sanders anyway,” Medina reported. “It looks like Sanders did well at caucuses for casino workers on the Strip.”

Monica Smith, a Culinary member since 1987 and a server at the Bellagio, told Buzzfeed that she caucused for Sanders out of concern for those without union-negotiated health insurance.

“We have so many people that have walked that picket line, blood sweat and tears, for us,” said Smith. “We’re going to be here to protect it, but I worry about other people that aren’t protected by unions. How do they get healthcare? What’s the dollar amount that they have to go through, do they have to worry about not being able to go to a hospital?”

Defying their leadership, a majority of members of the culinary union backed Bernie Sanders. From @nidhiprakash in Vegas: https://t.co/YBbRGA0iSJ

Dustin Guastella and Connor Kilpatrick wrote for the socialist outlet Jacobin Saturday that Sanders’ blowout win in Nevada shows “he has a working-class base committed to fundamentally transforming our radically unequal political and economic system.”

As results of the Nevada caucus trickled in Saturday, Sanders didn’t mention his early lead during a rally in El Paso, Texas. Instead, he delivered a fiery speech railing against greedy insurance companies and vowing to transform America’s political and economic systems.

The one advantage of being the front runner is @MSNBC will just straight up broadcast your speech about the #FightFor15, pay equity, and #UnionsForAll