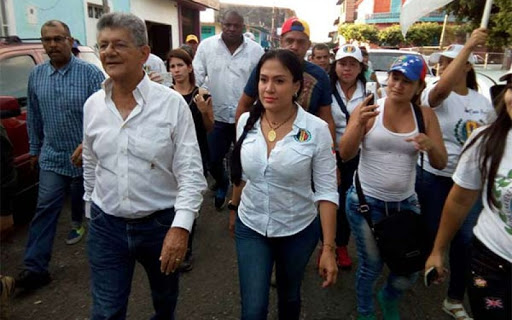 The Governor of Táchira state, Laidy Gómez, decided to support the parliamentary elections scheduled for December 6, but her former colleagues from Democratic Action (AD or Acción Democrática) won’t forgive her for this decision, which they consider a “betrayal” of the party.

For this reason, the national leadership of Democratic Action, led by Henry Ramos Allup, decided to expel her from the party, disregarding the fact that they don’t actually control the party. At the regional level a group of leaders who follow Allup’s guidelines also repudiated her decision.

RELATED CONTENT: Mary Pili Hernández: It is Time for Some PSUV Militant to Ask the TSJ for an Ad Hoc Board

“I can tell you with great respect, because that government (from Táchira state) got disconnected from the people, I see that she has repeatedly behaved like this. Because she betrayed the national line of the party, she betrays its colleagues on the bench in the collegiate body of the National Assembly, because she was a deputy of that Assembly. How is it possible that she is deciding to participate in a process in which a new National Assembly will be fraudulently elected and the one that she was part of will be displaced? The most serious thing is the betrayal of the leadership and the people of Táchira who elected it,” said Henry Flores, a regional representative of the Democratic Action group that still supports Ramos Allup, one of the leaders of the radical coalition known a G4, accused by many Chavistas of receiving order from Washington.

Allup also supported Caracas’s decision to expel Gómez, although she insists that she is part of the true and legitimate Democratic Action party.

The root of this dispute between AD members and ex-AD members is the fact that the governor announced her participation in the parliamentary elections, leading to the inclusion of Democratic Action on the electoral ballot.

“They believe they are the owners of the party,” said regional Democratic Action leader Henry Flores. “They must be clear that the symbols of the party came out on September 16, 1941 and not with the sentence of June 15, 2020, number 0071 of the Supreme Court of Justice,” referring to the court decision that gave Bernabé Gutiérrez, and a sizeable number of Democratic Action leaders, control over the party.

For his part, the regional secretary of AD of the board of Bernabé Gutiérrez, Miguel Reyes, assured that they aren’t traitors and that parliamentary elections are established in the Constitution.

“We are on the right side because we are activating the constitutional mechanism on the one hand, and on the other hand we are focused on what’s going to allow us, on January 5 of next year when the new National Assembly is installed, to have a new opposition, an opposition that really deals with people’s problems,” Reyes said.