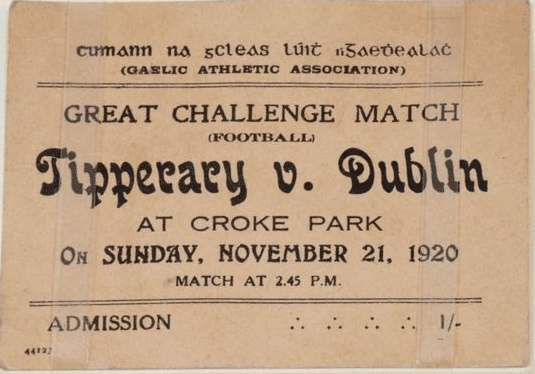 On the morning of Sunday 21 November 1920, Michael Collins a Republican leader in Dublin dispatched a cadre of Irish Republican Army volunteers to decimate a British spy ring of intelligence operatives operating mainly from the south side of Dublin. This was during the Irish War of Independence which had begun in earnest the previous year.

The object of the war was to remove Britain’s 800-year occupation of Ireland and was among the first rebellions against British colonial rule in the 20th century.

Collins was an intelligence officer with the IRA.He had determined to deal Britain’s spies in Ireland, in Dublin, in particular, a decisive blow.

When the operation had ended 14 suspected British spies and intelligence operatives had been executed.

It dealt a decisive blow to Britain’s attempts to quell, pacify and counter the growing tide of the Irish revolution, that was demanding a complete withdrawal from Ireland of Britain’s military and political occupation.

Later that day, Tipperary and Dublin Gaelic Football teams had a arranged a challenge match at Croke Park in the capital Dublin.

The match which some claim was a  charitable fundraiser for Irish Republican Prisoner dependents was due to take place on that afternoon..

Once the game had begun a contingent of the British regular army forces together with, the Royal Irish Constabulary and the infamous British army irregular ‘Black and Tans’ surrounded the ground and proceeded to enter the stadium to murder 14 unarmed civilians. Men women and children who have gathered to watch the game, which had promised to be a thrilling game between two of the greatest teams from two of the finest counties in Ireland.

This massacre much like many to come found unarmed civilians in the cross hairs of British army rifles wielded by men under orders to pacify the natives.

From what became known as Bloody Sunday in Ireland, to Palestine, to Greece, to Amritsar India, to concentration camps in Kenya where they castrated the incarcerated, to Aden, to the Falklands, Iraq, Afghanistan, Libya, Syria and Yemen, Britain’s history of war crimes against civilians is infamous.
There are reports that 228 rifle and revolver rounds were discharged before the massacre ended.
.The dead include three young children.
Jerome O’Leary 10 DublinWilliam Robinson 11 Dublin

A young woman, Jane Boyle,26, Dublin, who was due to be married 5 days later was buried in her wedding dress.

Ten men some of whom had fought for Britain as volunteers in the first world war. were martyred. They are:James Burke (44), Dublin

These murders were mirrored in 1971 when the British army Parachute murdered 11 civilians in the Ballymurphy massacre Belfast and again by the same regiment to include some of the same soldiers in Derry. 14 civilians were murdered by the same company of the same battalion, Parachute Regiment, who had been moved to the Maidan city on that day specifically to kill, at will 14 Civil rights protestors on the streets of Derry on Sunday 30 January 1972.

This massacre in Derry effectively finished all calls for peaceful street protests against the imprisonment of civilians without trial in the north of Ireland for fear of more mass murders.

The massacre succeeded temporarily in its aim of forcing the people off the streets. Ultimately many claim it increased recruitment to the Irish Republican Army, as the citizenry reacted to the unprovoked British military massacres of unarmed civilians by ironically arming themselves and fighting back.

On the 100th anniversary, the Gaelic Athletic Association, its members, supporters, its teams of football, hurling and camogie commemorated the deaths in Dublin at Croke Park.

One player was among the dead that day and the main stand in the current Croke Park stadium is named after him the Hogan Stand.

While millions in Ireland remembered the dead in Dublin from 1920 a very poignant tribute was paid to the dead at Free Derry corner.

Members of the Bloody Sunday Committee in Derry to include family of those slain gathered for a candlelit vigil.

A remarkable spectacle were 14 fourteen people representing the dead in Dublin 1920 and the 14 dead in Derry in 1972 gathered to remember the martyred.

Among those attending in Derry were Kate and Linda Nash and Helen Deery whose relatives were murdered. No British soldier has ever been convicted.

Britain’s history of terror in Ireland will only end when the British finally withdraw and allow the Irish people to have the opportunity to reconcile and begin building a nation based on tolerance and respect.

Peace, stability and hope for the future are all on the horizon when the people finally confirm reunification and Ireland long a province be a nation once again